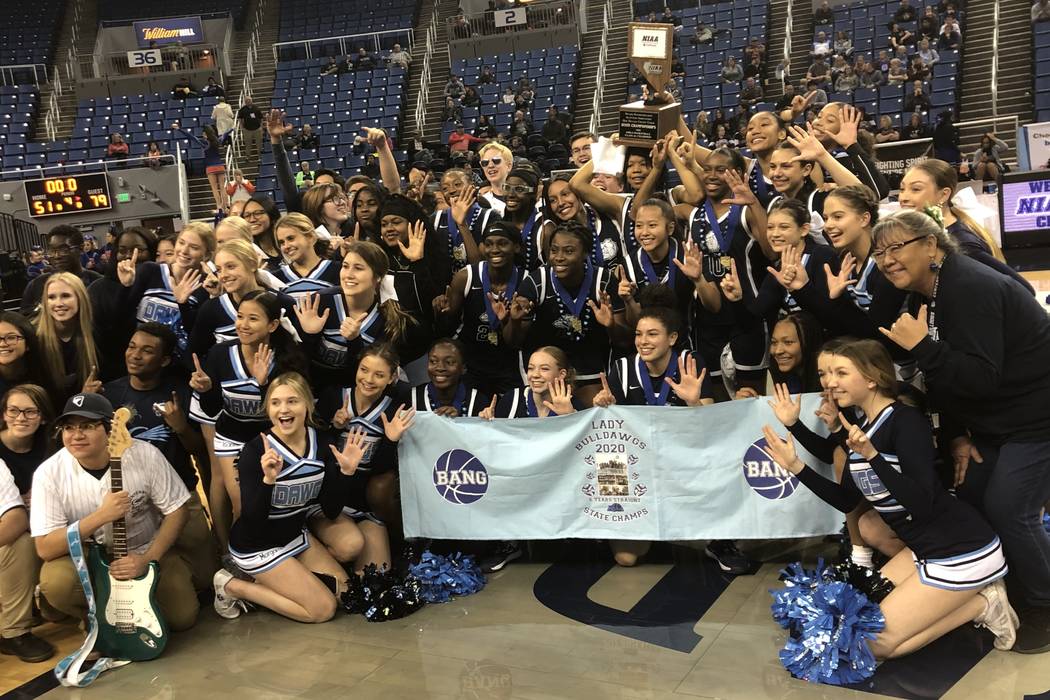 Centennial's girls basketball team poses with the school's band and cheerleaders after a 79-51 victory over Desert Oasis in the Class 4A state championship game at Lawlor Events Center in Reno on Friday, Feb. 28, 2020. (Sam Gordon / Las Vegas Review-Journal) 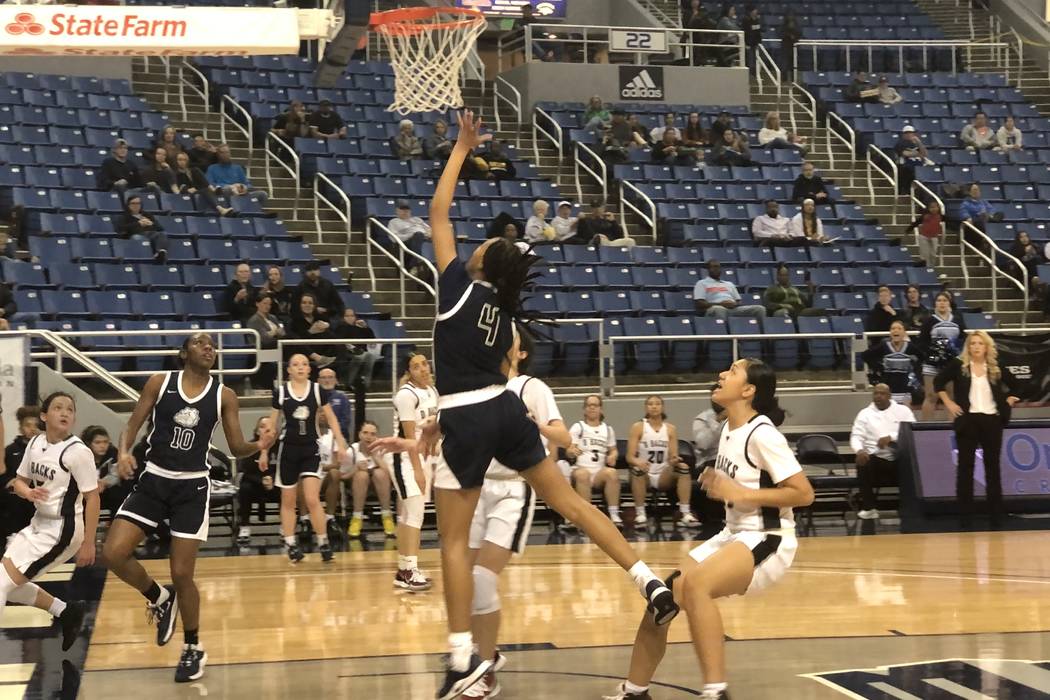 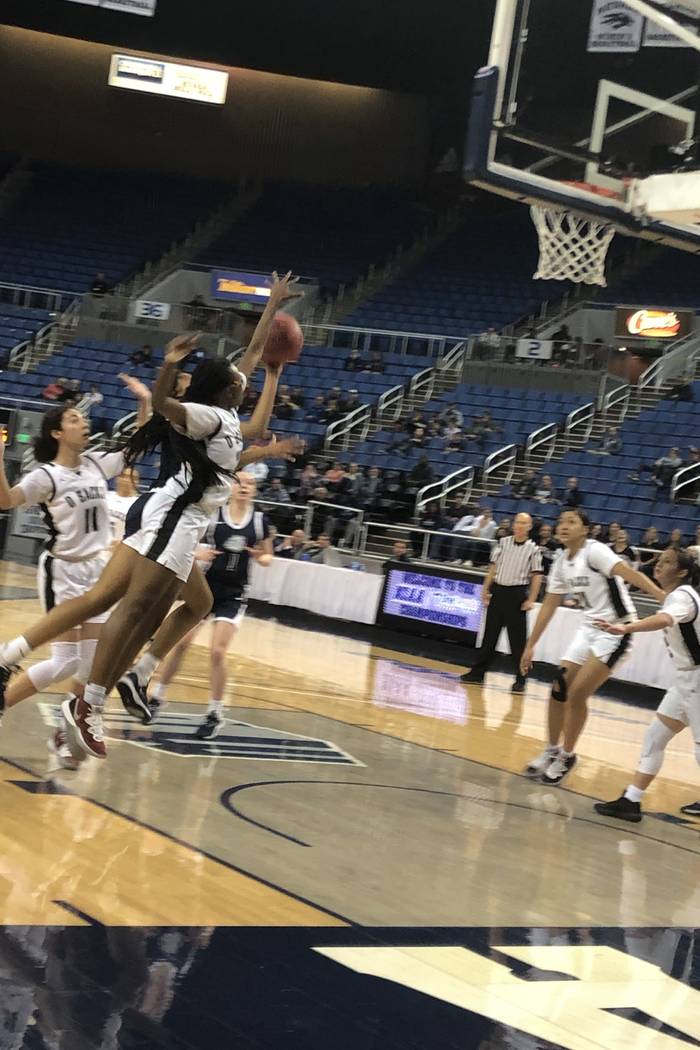 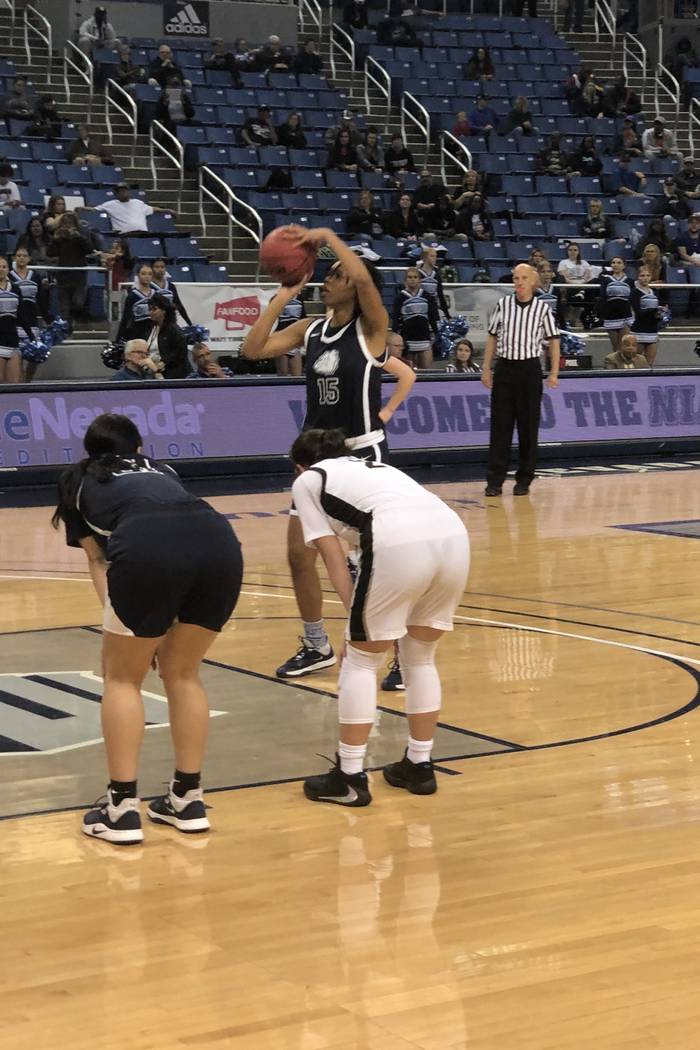 RENO — It’s hard to imagine now, but there was a time when Las Vegas Valley teams couldn’t find a way to win a girls state basketball championship.

Centennial coach Karen Weitz remembers it well, and she set out to change that.

On Friday night, her Bulldogs made history. Centennial whipped Desert Oasis 79-51 to win the Class 4A state championship for an NIAA-record sixth straight title. It’s the school’s 12th championship, all of them in the past 19 seasons.

Three of those seniors led the charge for the Bulldogs. Jade Thomas had 19 points, Aishah Brown 14 and Daejah Phillips 11. Junior Aaliyah Ibarra scored 10.

It was a back-and-forth game until late in the second quarter. That’s when Desert Oasis center Desi-Rae Young went to the bench with three fouls, and the Bulldogs (24-6) went on a 13-0 run to end the half with a 43-26 lead.

“We knew if we didn’t have full strength in the game, we were going to be in trouble,” Desert Oasis coach Laurie Evans said. “Desi-Rae is a powerhouse. There aren’t a lot of people who can guard her in the state. With her in foul trouble, it was just tough.”

The Bulldogs’ depth and length at almost every position continued to take a toll in the second half, and their lead continued to swell.

The Diamondbacks never got closer than 15 in the second half, and Young eventually fouled out with 7:31 left. Their other senior, guard Eliyjah Pricebrooks, struggled against Centennial’s defense and finished with four points.

“We knew it would take almost a perfect game on our end, and we didn’t have that tonight,” Evans said. “That’s OK. We still won 24 games, and we still got our first-ever state runner-up. We’re proud of that.”

For the sixth consecutive season. pic.twitter.com/N05Uttu1Pt