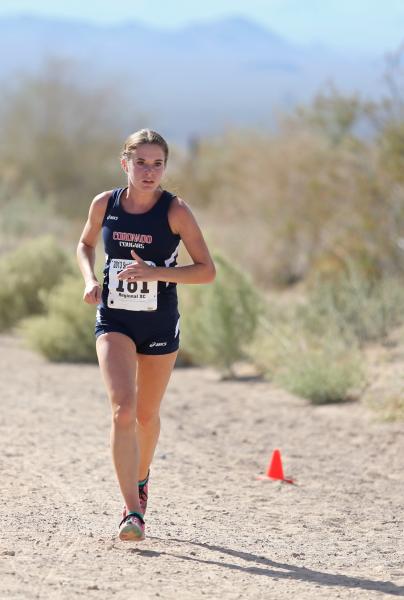 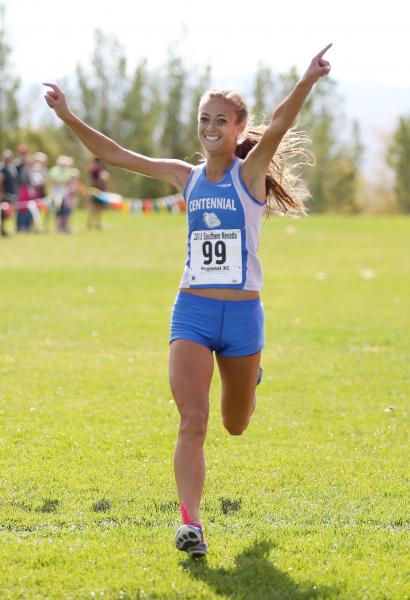 Centennial’s Sydney Badger is all smiles after winning the Sunset Region meet Saturday. 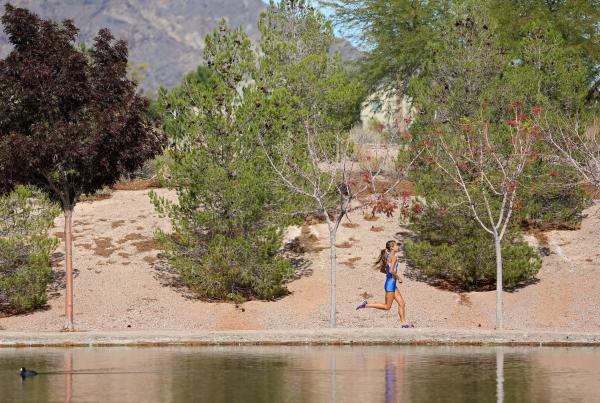 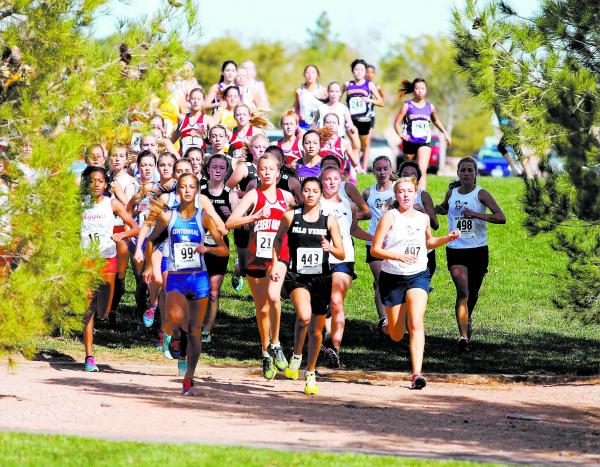 Runners look for room at the start of Saturday’s Sunset Region meet.

On Saturday, the Gators turned heartbreak into elation, albeit barely.

Placing five runners in the top 10, Green Valley finished with 32 points, one point better than Coronado, to claim the crown at Veterans’ Memorial Park.

“They run for each other, run for the other six,” said Green Valley coach Blaine Thompson. “The girls won by one point; the boys lost by one point. It’s incredible how close the two teams are. If you add them together (boys and girls) we would have tied.”

Of the top seven runners in the race, six were from the two schools.

After the first seven runners had crossed the line, Coronado had a 10-13 lead, but the Green Valley duo of Sariah Vogl and Patricia Weintgartner finished ninth and 10th to close out the Gators’ scoring. They were followed by Coronado’s Emma Czerwinski and Danielle Green in 11th and 12th.

“I’m a little sad because it’s my last race here running cross country,” said Dort. “I was thinking about my team the whole time. I had a really good race at Divisional, and I want to get ready for state. Today I wanted to go out hard, run a mile-and-a-half race, and then cool it down; that’s what I did.”

“The girls ran great; they were phenomenal,” said Centennial coach Roy Session. “Our number three today, Roberts is improving every week, getting better and better.”

“I’m so excited and proud of our team,” said Badger. “We are definitely the hardest workers for sure. I knew what I wanted to do and I accomplished it.”

Ebonique Diaz of Sunrise Mountain took off at the start and was never headed, winning by over a minute (20:48.3). Stephanie Thelander (Pahrump Valley) finished second (21:56) and Faith Lutheran teammates Hannah Pavlov (21:59.3) and Jessica Scamman (22:06) finished third and fourth.

“It’s been a difficult season,” said Diaz, who was third at state in 2012. “I’ve been sick, trying to recover from that, but I’m looking forward to state.”

The Mustangs’ Jeneke Heerema defended her individual crown, winning in 20:39.3. Teammate Bailey Gosse was second in 20:49.2.