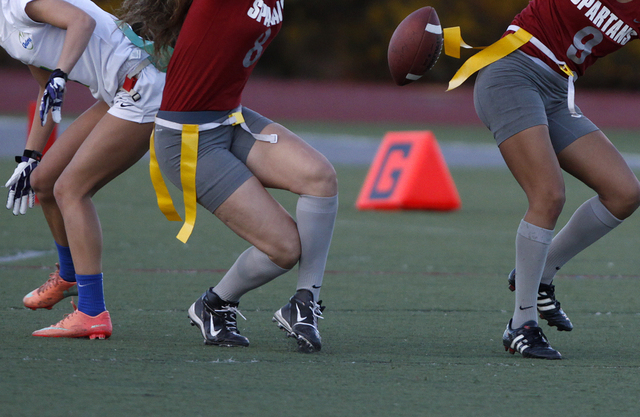 Cora Butorac and Saleena Quichocho each recorded an interception for the Dragons.

Virgin Valley 26, Boulder City 13 — At Mesquite, Kallie Graves completed 14 of 19 passes for 156 yards and three touchdowns and ran for 36 yards and a score to power the Bulldogs by the Eagles.

Madison Cheney caught all three touchdowns and finished with 107 yards receiving, and Dylan Bryant caught an 11-yard TD strike for Virgin Valley, which led 20-0 at halftime.

Durango 47, Spring Valley 13 — At Spring Valley, Deszarai Bellender ran for 320 yards and five touchdowns on 12 carries to power the Trailblazer by the Grizzlies.

Kiana-Capri Wilcox had three carries for 105 yards and a TD and also threw a scoring pass to Nayeli Silva-Kahalewai for Durango, which led 27-0 at halftime.

Chaparral 34, Moapa Valley 13 — At Chaparral, Vanessa Sanchez caught four passes for 110 yards to help the Cowboys take down the Pirates.

Chaparral’s Alyssa Porras had a hand in three touchdowns, rushing for two and throwing one.

Rancho 20, Valley 13 — At Valley, the Rams scored in the second overtime to top the Vikings.

Heather Robinson caught two touchdown passes in the second half for Valley.

Sierra Vista 14, Bonanza 13 — At Sierra Vista, the Mountain Lions built a 14-0 lead and held off the Bengals.

Jamie Kalaau-Sunia hauled in a touchdown catch in the first half, and teammate Courtney O’Neal supplied a rushing TD in the second half for Sierra Vista.

Dominique Korschinowski led the Desert Oasis defense with five tackles and a sack. Alyssa Chautla had two sacks for the Diamondbacks.