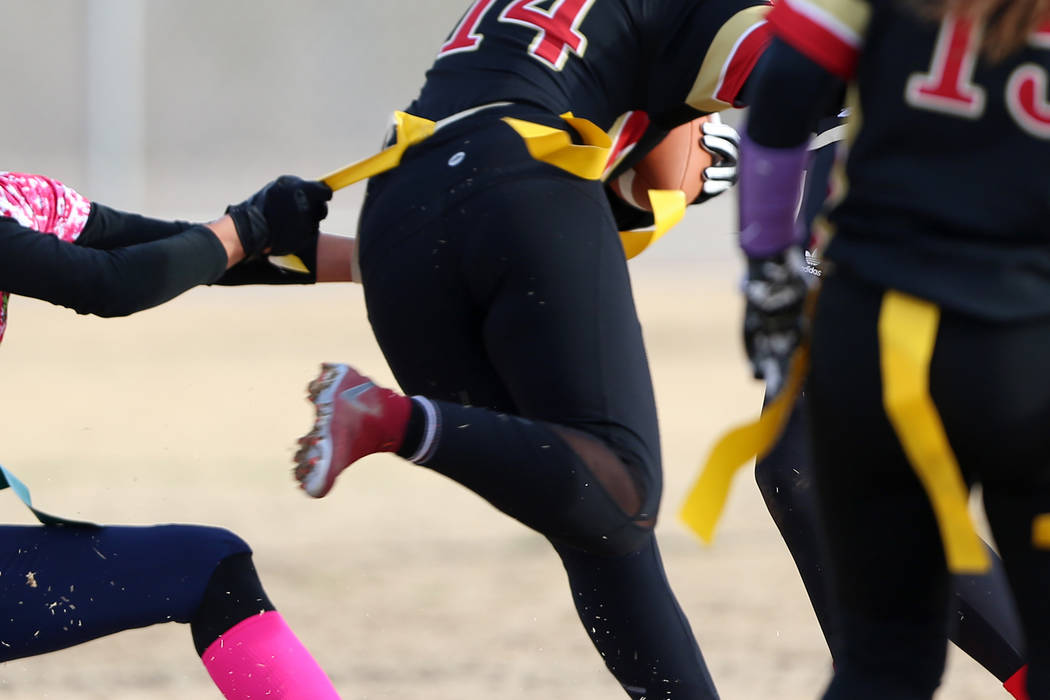 Sierra Vista’s Aaliyah Medina completed 22 of 34 passes for 390 yards and six touchdowns on Tuesday to lead the Mountain Lions to a 46-25 road win over Durango.

Durango’s Gabriela Corchado caught nine passes for 154 yards and two touchdowns and added a 16-yard TD run. Tatiana Baes had a 77-yard TD catch and rushed for a touchdown, and Nayeli Silva-Kahalewai completed 13 of 17 passes for 300 yards for the Trailblazers.

Shadow Ridge 33, Centennial 19 — At Shadow Ridge, Samantha Guerra supplied 14 rushes for 135 yards and three touchdowns, and added nine tackles and an interception on defense, as the Mustangs downed the Bulldogs.

Natalia Rosales added a rushing touchdown for the Mustangs.

Cindylou Rasiang completed 25 of 37 passes for 331 yards and three TDs for Bonanza. Shayne Dunn had eight catches for 175 yards and two TDs, and Alicia Kestneer caught eight passes for 72 yards and a score for the Bengals. .

Varela had six catches for 79 yards. Stephanie Tewart completed 18 of 24 passes for 206 yards and five TDs, and Angel Hdoges added a TD catch for Del Sol.

Silverado 31, Clark 6 — At Clark, Katie Mulligan completed 21 of 30 passes for 158 yards and five TDs as the Skyhawks routed the Chargers.

Brielen Aquino and Kathleen Fonua each had two TD catches, and Toni Garcia caught a touchdown pass for Silverado.

Kennedy Power rushed for 82 yards and a touchdown and intercepted a pass for the Skyhawks.

Chaparral 32, Mojave 0 — At Chaparral, K.K. Millsap passed for 170 yards and two touchdowns as the Cowboys blanked the Rattlers.

Vanessa Sanchez rushed for a touchdown, threw a touchdown pass and intercepted two passes for Chaparral.

Virgin Valley 45, Valley 0 — At Mesquite, Shaylee Feltner rushed for 180 yards and four touchdowns on 16 carries as the Eagles routed the Vikings.

Rickard completed 13 of 21 passes for 180 yards. Ashlynn Tuss caught a TD pass and rushed for a touchdown, and Jaid Riana Raval had four catches for 75 yards and two TDs for Desert Oasis.