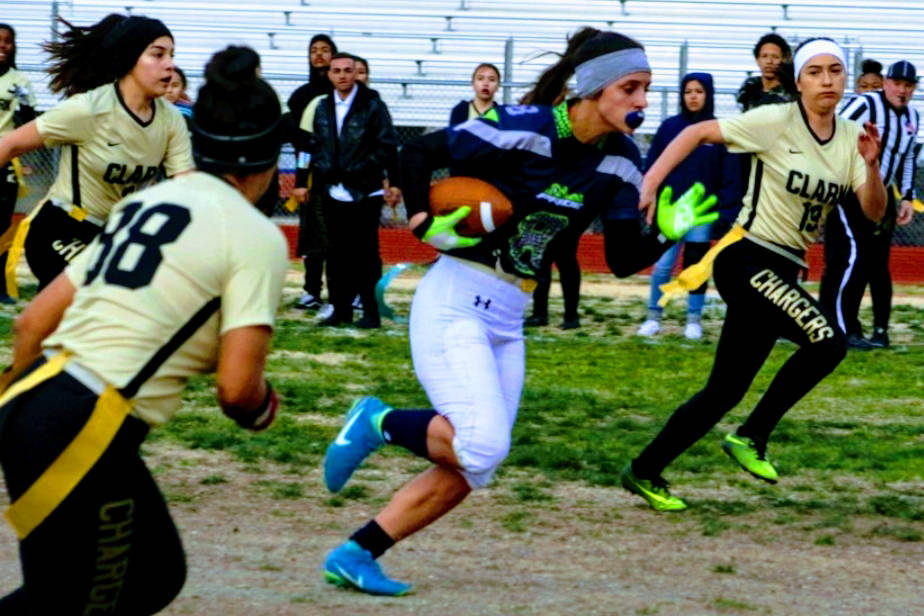 Jazlyn Camacho returned an interception 29 yards for a touchdown with about two minutes to play Wednesday to lead Green Valley’s flag football team to a 31-25 win over Clark in the Desert Region quarterfinals at Silverado.

Green Valley tied the game on a 46-yard touchdown run by Deborah Grant. After Camacho’s touchdown return, Clark drove to the Green Valley 20, but the Gators stopped the Chargers on four plays and were able to run out the clock.

Grant rushed for 164 yards on 22 carries to lead Green Valley (24-2). Jennifer Haberstock completed 20 of 32 passes for 188 yards and three TDs for the Gators. Camacho had seven catches for 54 yards and two scores and also recorded 10 tackles. Mandolyn Scalisi added a TD catch for Green Valley, which plays hosts Basic (4-15) in the semifinals at 5:30 p.m. on Friday.

Clark’s Jagayra Gomes rushed for 126 yards and two touchdowns on 15 carries. Gomes scored on runs of 55 and 6 yards. She also completed 10 of 23 passes for 150 yards, including an 18-yard scoring strike to Jaeda Centeno.

Centeno had four catches for 97 yards, and Jania Quinones-Teran had a 6-yard TD run for the Chargers (19-7).

Basic 25, Silverado 19 — At Silverado, the Wolves scored two second-half touchdowns to upset the Southwest League champion Skyhawks and advance to the semifinals.

Katie Mulligan passed for 185 yards and two touchdowns for Silverado (13-3).

Coronado 25, Liberty 0 — At Coronado, Amanda Burt and Payton Bard each had two sacks as the Cougars shut out the Patriots.

Ashtyn Almeido completed 22 of 26 passes for 179 yards and two touchdowns for Coronado. Reagan Raimer had eight catches for 65 yards and two TDs, and Kaylee Zicha and Meg Tysee each caught a TD pass for the Cougars.

Sierra Vista 19, Tech 13 — At Coronado, the Mountain Lions came from behind to defeat the Roadrunners.

Tech led 13-0 in the first quarter before Sierra Vista rallied.

Adriana Carrillo intercepted two passes, and Taylor Ritayik threw a touchdown pass and rushed for a score for Tech (11-8).

Bonanza 34, Las Vegas 13 — At Cimarron-Memorial, Cindylou Rasiang completed 16 of 23 passes for 266 yards and five TDs as the Bengals beat the Wildcats.

Ashley Vasquez had three catches for 84 yards, and Charlene Beck had 15 carries for 88 yards for Bonanza (15-9).

Laura Valle had nine tackles for the Bengals, who host Shadow Ridge (12-9) in the semifinals at 5:30 p.m. on Friday.

Brooklyn Stone had six catches for 86 yards and a touchdown, and Aranza Sepulveda caught a TD pass for the Wildcats.

Shadow Ridge 32, Cimarron-Memorial 12 — At Cimarron, Samantha Guerra rushed for a touchdown, caught a TD pass and returned an interception for a score as the Mustangs topped the Spartans.

Guerra rushed for 183 yards on 27 carries and also had nine catches for 75 yards. She also recorded five tackles.

Mikayla Brown completed 25 of 29 passes for 263 yards and two TDs for Shadow Ridge.

Deviny Luna an Natalia Rosales each had a TD catch for the Mustangs, who picked off four passes.

Palo Verde 13, Centennial 12 — At Legacy, the Panthers edged the Bulldogs to advance to the semifinals.