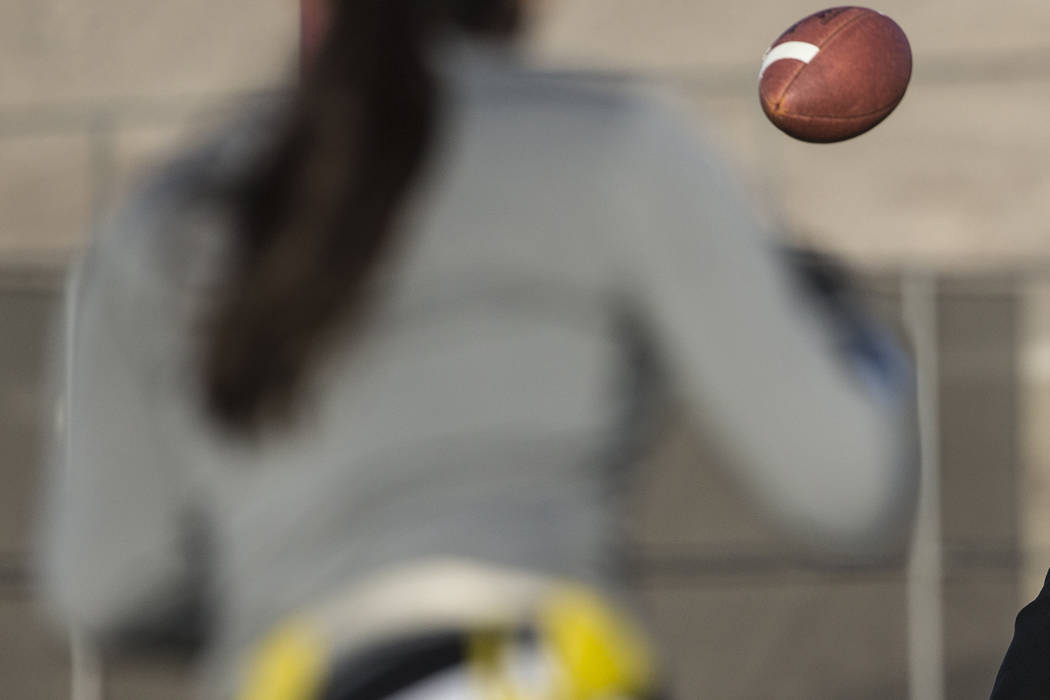 Brielen Aquino caught seven passes for 155 yards and three TDs for the Skyhawks, and teammates Maile Gardner and Kathleen Fonua each caught a TD pass. Kennedy Power rushed for 164 yards and a touchdown on 15 carries for Silverado.

Sydni Bishop returned an interception for a touchdown for the Skyhawks.

Heather Robinson caught two touchdown passes and had 125 receiving yards, and teammate Andy Abrigo had seven receptions for 110 yards and a touchdown for the Vikings, who got 130 rushing yards and a score from Frida Ochoa-Uribe.

Del Sol 14, Boulder City 12 — At Boulder City, Stephanie Tewart had a 24-yard touchdown run with six minutes left to go in the game to lift the Dragons over the Eagles.

Tewart also completed 8 of 20 passes for 90 yards and a touchdown for Del Sol.

Ryann Reese ran for a touchdown, and Makaela Perkins tossed a TD pass to Haley Jackson for Boulder City.

Virgin Valley 27, Moapa Valley 6 — At Overton, Shaylee Feltner rushed for 190 yards and three touchdowns on 22 carries to lead the Bulldogs by the Pirates.

Cimarron-Memorial 33, Centennial 20 — At Cimarron, Tiarra Del Rosario completed 27 of 34 passes for 295 yards and five touchdowns as the Spartans defeated the Bulldogs.

Del Rosario also rushed for 103 yards, and Mya’Liah Bethea had 13 receptions for 152 yards and two touchdowns for the Spartans.

Dina Lee had eight receptions for 90 yards and two touchdowns, and Skylar Smith hauled in one TD pass for Cimarron.

Clark 33, Desert Oasis 8 — At Desert Oasis, Thea Espanola and Jania Quinones-Teran each rushed for two touchdowns as the Chargers downed the Diamondbacks.