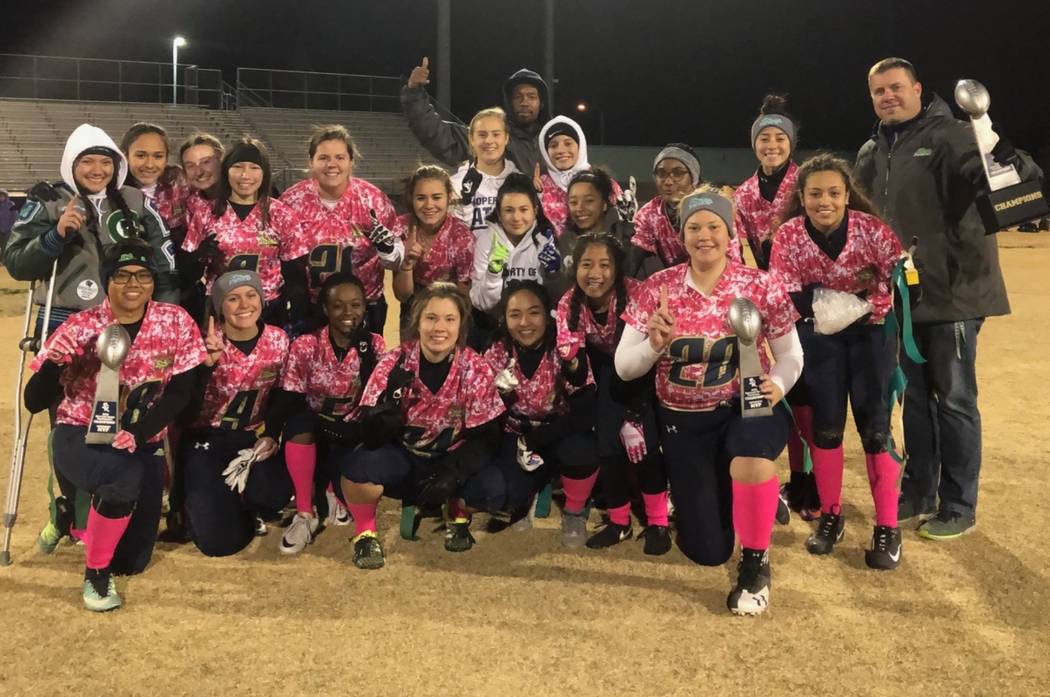 Haberstock completed 22 of 26 passes for 201 yards and added a touchdown pass to Mandolyn Scalisi. Scalisi caught seven passes for 96 yards.

Deborah Grant rushed for 95 yards and two touchdowns on 17 carries for the Gators. She also caught eight passes for 60 yards.

Whitley Brow caught five passes for 89 yards and two touchdowns for the Falcons. Morgan Melton also hauled in a TD pass for Foothill.

Clark 44, Bonanza 41 — Gomes had a hand in five touchdowns as the Chargers outlasted the Bengals for third place.

Gomes completed 10 of 17 passes for 85 yards and three touchdowns, all to Jaeda Centeno.

Gomes also had 14 carries for 152 yards and two scores. Valeria Morquecho rushed for 71 yards and two TDs for Clark, which trailed 20-18 at the half.

Cindylou Rasiang threw for 362 yards and six touchdowns for Bonanza.

Green Valley 33, Bonanza 14 — Haberstock threw for 181 yards and two touchdowns to help the Gators move into the final with a win over the Bengals.

Sidney Rood also tossed a touchdown pass for the Gators. Hailee McKay, Decuir and Scalisi each caught a scoring pass for Green Valley.

Grant rushed for 88 yards and a touchdown on 13 carries for Green Valley, and Arce intercepted two passes and returned one for a touchdown.

Foothill 20, Shadow Ridge 19 — Gibbs completed 21 of 33 passes for 218 yards and two touchdowns as the Falcons nipped the Mustangs in a semifinal.

Melton caught both of Gibbs’ TD passes, and teammate Makenzie Yeoman rushed for a score.

Rasiang completed 15 of 30 passes for 234 yards and three touchdowns.

Vasquez caught five passes for 110 yards and two scores, and Kestner also caught a TD pass for the Bengals.

Clark 20, Shadow Ridge 12 — Gomes threw two touchdown passes and rushed for a score to lead the Chargers over the Mustangs.

Gomes also rushed for 84 yards, including a 10-yard scoring run.

Centeno caught six passes for 119 yards and intercepted a pass for Clark.

Morquecho had 14 carries for 100 yards and a touchdown for Clark, which trailed 19-12 at the half.

Thea Espanola added 13 carries for 110 yards, and Centeno had five catches for 46 yards for the Chargers.