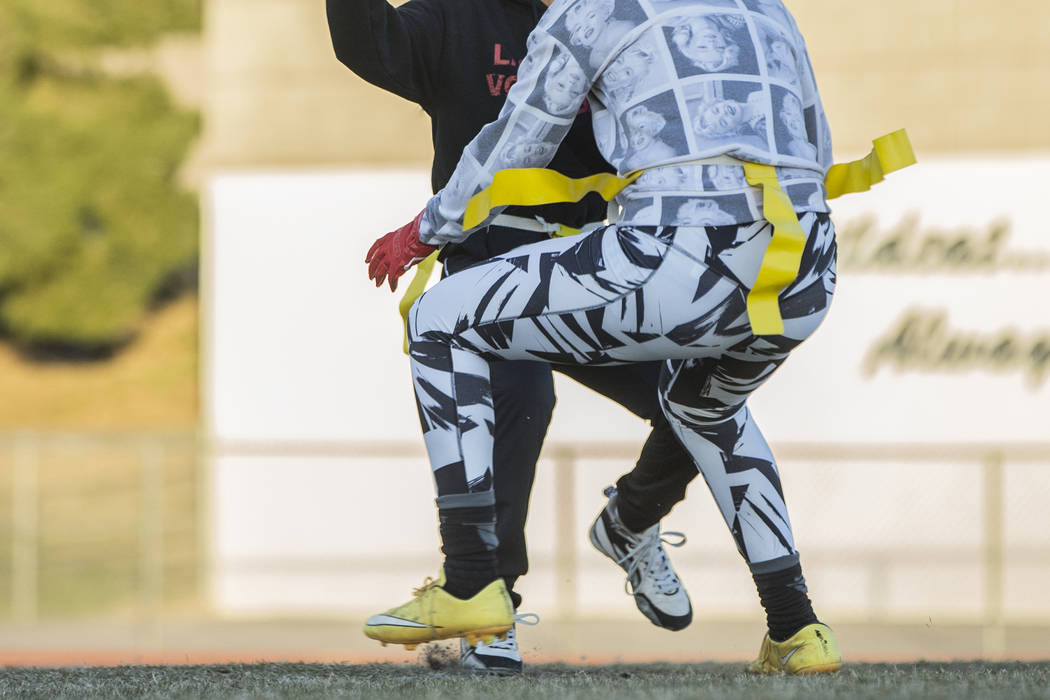 Makenzie Leishman led Virgin Valley’s flag football team with 12 tackles and two sacks and added 36 receiving yards to help the Bulldogs to a 25-18 win at Del Sol on Tuesday afternoon.

Kallie Graves completed 6 of 10 passes for 86 yards, including a touchdown to Markell Ludvigson for Virgin Valley.

Katie Zuniga and Macee Bundy each added a rushing touchdown for the Bulldogs.

Desert Oasis 25, Sierra Vista 20 — At Desert Oasis, Makayla Rickard completed 12 of 24 passes for 278 yards and three touchdowns and ran for 77 yards and a score to lead the Diamondbacks past the Mountain Lions.

Ruby Martinez had 103 receiving yards and two touchdowns, and Izriah Hodson caught a 73-yard touchdown pass for Desert Oasis, which led 13-0 at halftime.

Canei Cunningham had 16 tackles for the Diamondbacks.

Bonanza 33, Spring Valley 12 — At Bonanza, Alexis Marquez and Shayne Dunn each caught two touchdown passes in the Bengals’ win over the Grizzlies.

Cindylou Rasiang was 13-for-26 passing for 182 yards and three touchdowns, and Charlene Beck had eight carries for 104 yards and a score for Bonanza, which led 20-0 at halftime.

Tech 24, Moapa Valley 0 — At Tech, Taylor Ritayik ran for three touchdowns, and the Roadrunners intercepted five passes in a win over the Pirates.

Clark 13, Durango 0 — At Clark, Jagayra Gomes ran for two scores as the Chargers blanked the Trailblazers.

Autumn Flowers aided Clark’s defense with three sacks, and teammates Dejana Chapman and Dominique Orozco each had an interception.

Boulder City 15, Chaparral 13 — At Boulder City, Megan Hartung recorded a safety to lead the Eagles past the Cowboys.

Las Vegas 41, Canyon Springs 21 — At Las Vegas High, the Wildcats grabbed a 21-6 halftime lead en route to the victory over the Pioneers.

Rancho 39, Eldorado 6 — At Rancho, the Rams routed the Sundevils.