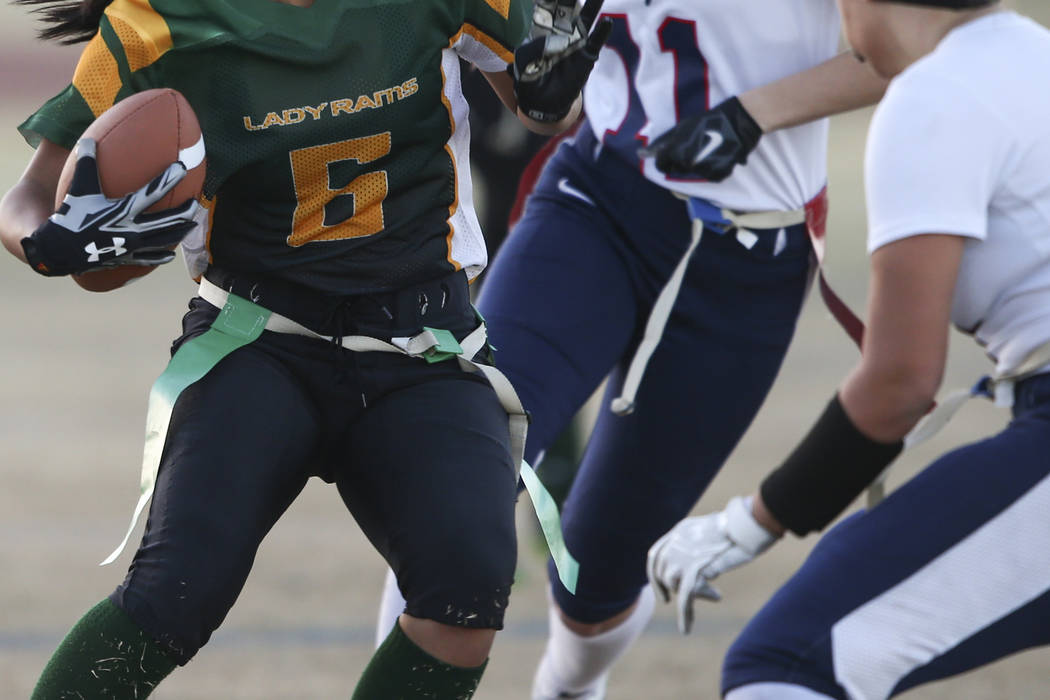 Legacy’s Mikaela Nunez scored four touchdowns and the Longhorns held on for a 24-21 road win over second-ranked Cimarron-Memorial in flag football on Tuesday.

Kennedy Williams intercepted a pass on fourth down in the final 30 seconds to seal the victory.

The Longhorns led 18-13 at the half, and Nunez returned an interception for a touchdown to push the lead to 24-13.

Tiarra Del Rosario completed 16 of 31 passes for 316 yards and two TDs for the Spartans. Mya Bethea had eight catches for 178 yards and a touchdown for Cimarron.

Palo Verde 18, Shadow Ridge 12 — At Palo Verde, Alyssa Tygh scored with three seconds left on a quarterback keeper to lift the Panthers over the Mustangs.

Jordan Ford ran for 166 yard on 19 carries with a touchdown for Shadow Ridge.

Arbor View 26, Centennial 13 — At Centennial, Makayla Rucks had four catches for 112 yards and a touchdown and added a rushing score to power the Aggies over the Bulldogs.

Brittnee Kublick completed 13 of 21 passes for 183 yards and two TDs for Arbor View.

Haylee Niemann had five catches for 40 yards and a touchdown, and Tyler Denight added a rushing TD for the Aggies.

Coronado 31, Green Valley 0 — At Green Valley, Caitlin Shannon rushed for two touchdowns and passed for two scores as the Cougars routed the Gators.

Jensen Boman had two catches for 81 yards and a touchdown, and Sydnee Hansne caught a 4-yard TD pass for Coronado.

Bryn Steiber added an interception return for a score for the Cougars.

Desert Pines 37, Mojave 13 — At Desert Pines, Nevaeh Wilikns-Johnson ran for 296 yards and four touchdowns on 17 carries as the Jaguars routed the Rattlers.

Alejandra Olan added 103 yards on 13 carries with a TD for Desert Pines, which broke a 13-13 halftime tie with 24 second-half points.

Carolina Rodriguez tossed a 50-yard scoring pass to Nylah Scott for the Jaguars.

Anahi Rosales ripped off an 85-yard TD run for Mojave and threw for a touchdown.

Foothill 46, Liberty 0 — At Foothill, the Falcons threw seven touchdown passes in the first half and rolled past the Patriots.

Whitley Brown caught five passes for 129 yards and a touchdown, and Sydney Babakitis had five receptions for 97 yards and a score for the Falcons.

Silverado 19, Basic 12 — At Basic, the Skyhawks topped the Wolves.

Marissa Owen ran in both of Basic’s touchdowns.