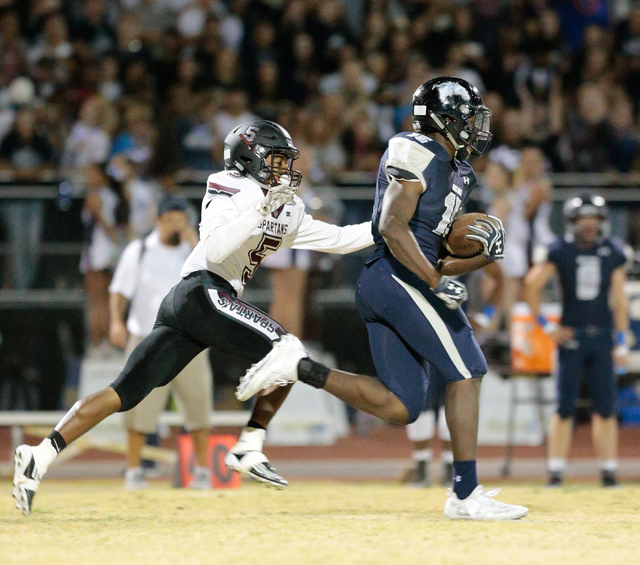 The junior posted the fastest time at the Southern Nevada league meets at Equestrian Park, winning the 3.1-mile Northwest League race with a time of 16 minutes, 45.8 seconds and leading the Aggies to the team title.

The junior won the Northwest League championship race in dominating fashion at Equestrian Park, with a time of 19 minutes, 21.5 seconds for 3.1 miles. She was 38 seconds ahead of the nearest competitor.

The senior running back rushed for 274 yards and four touchdowns in leading the Mustangs to a 61-46 win over Centennial. It was the school’s first win over the Bulldogs in 11 years.

The junior shot 9-under-par 63 at Siena Golf Club to claim the Sunset Region individual title. It was her second consecutive region crown, and her score in relation to par is a state postseason record.

The junior had almost all the Cougars’ goals last week, recording a hat trick in a 3-0 win over Silverado and scoring once in a 2-1 victory over Liberty.

The freshman had two goals and two assists in a 5-1 win over Legacy and then added one goal in the Mustangs’ 3-0 win over Centennial.

The senior won the Sunset Region championship in dominating fashion, dropping just three games in four matches to get through the semifinals. Gajardo then won the region crown with a 6-1, 6-3 victory over Cesar Castro of Durango.

The freshman didn’t lose a game in the Sunset Region tournament until the semifinals, and even then she only lost two games in her two-set victory. Boch-Collins proceeded to win the region title with a 6-2, 6-2 win over Averiana Mitchell of Durango.

The junior setter helped the Crusaders remain in second place in the Northwest League with a pair of five-set victories. Vancura had 43 assists in a win over Centennial and finished with 53 assists and 13 digs against Arbor View.

ARBOR VIEW — Girls soccer player Jolie Meyers had two goals and an assist in a 7-0 victory over Faith Lutheran.

CIMARRON-MEMORIAL — Boys soccer player Dresdan Quackenbush had a total of three goals and three assists in victories over Legacy and Palo Verde.

FAITH LUTHERAN — Football player Sagan Gronauer completed 14 of 22 passes for 232 yards and three TDs in a 57-20 win over Cimarron-Memorial. Girls volleyball player Tayah Washington had a total of 34 kills, 20 digs and six blocks in wins over Centennial and Arbor View.

GREEN VALLEY — Girls golfer Katherine Kares shot a 1-over-par 73 to finish fifth at the Class 4A Sunrise Region tournament. The score was Kares’ lowest of her prep career and helped the second-place Gators qualify for the state tournament.

PAHRUMP VALLEY — Football player Parker Hart rushed for two touchdowns and passed for a score in a 35-14 win over Western. Girls volleyball player Alexis Trieb had a season-high 23 kills in a 3-2 victory over Mojave.

SANDY VALLEY — Football player Brandon Eastham passed for 113 yards and two TDS, rushed for 179 TDs and returned an interception for a touchdown against Beaver Dam.

SIERRA VISTA — Girls soccer midfielder Calista Reyes had the team’s lone goal in a 1-1 tie with Bonanza. Football player Shane Alcantra had 13 tackles, including five solos and one tackle for loss, in a 14-7 win over Desert Oasis.