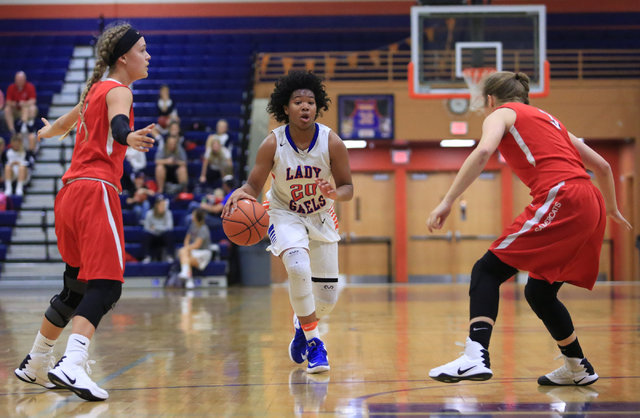 The senior guard had 37 points, five assists, five steals and four rebounds in a 76-63 win over Desert Oasis. Valdez hit six 3-pointers, and scored 14 points in the third quarter to help the Trailblazers rally from a 31-30 halftime deficit.

The senior averaged 12.0 points in six victories for the Gaels, who captured the Las Vegas Invitational title. Jackson had 12 points and seven rebounds in a 52-35 win over Castle View (Colorado) in the final.

The senior tight end finished with 42 catches for 570 yards and five touchdowns last week to lead the Spartans to wins over Western, Cheyenne and Moapa Valley.

The 170-pound senior went 5-0 in matches he wrestled at the Mustang Stampede, four by fall and one by technical fall. He pinned his opponent from Alta (Utah) in 58 seconds.

ADELSON SCHOOL — Boys basketball player Jake Buchman had 26 points against Lincoln County, and scored 13 against Spring Mountain to go over 1,000 points in his career.

CALVARY CHAPEL — Boys basketball player Elijah Martinez had 42 points and 10 rebounds and was 5-for-8 on 3-pointers in a 73-62 win over Mountain View.

GREEN VALLEY — Wrestler Steele Dias placed first at 106 pounds at the 53-team La Costa Canyon Invitational in Carlsbad, California to improve to 20-0 on the season. Boys bowler Joe Gerencser had a 722 series against Basic.

LEGACY — Girls bowler Maraya Gamon posted a 195 average in a win over Centennial.

MOJAVE — Flag football player Marshae Aikens-Butler had a touchdown run against Green Valley. Wrestler Don Phillips went 5-0 with five pins at 220 pounds at the Mustang Stampede at Shadow Ridge, improving to 15-0 on the season.

PALO VERDE — Flag football player Allyson Snelling had a total of four touchdowns in wins over Durango and Desert Oasis.