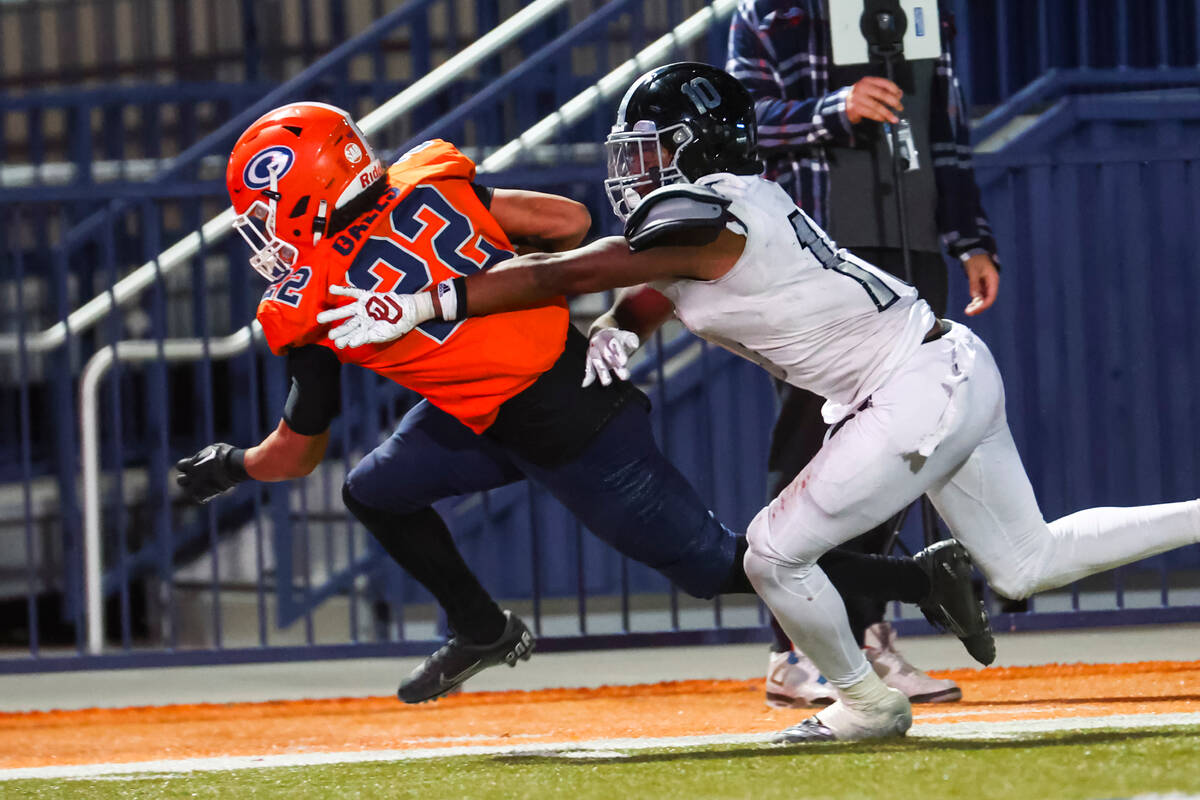 Bishop Gorman’s Micah Kaapana (22) runs the ball to score a touchdown past Desert Pines’ Malik Stinnett (10) during the second half of a Class 5A playoff football game at Bishop Gorman High School on Friday, Nov. 4, 2022, in Las Vegas. (Chase Stevens/Las Vegas Review-Journal) @csstevensphoto

No decisions were made on the Class 5A, 4A and 3A high school football realignment for the next two seasons at a meeting Thursday in Reno.

The Nevada Interscholastic Activities Association Board of Control voted to table any decisions on the proposed football realignments until a date to be determined. The realignment proposals were approved by the Realignment Committee last week.

Several board members said they were not ready to approve the football realignment, which will cover a two-year cycle starting in the fall. Northern representatives said they wanted to wait until there was a proposed playoff format.

NIAA executive director Donnie Nelson said there will be emergency meetings for the Realignment Committee, to approve a football realignment and work on a playoff format, and the Board of Control to approve it.

No dates were announced for those meetings, but Nelson said there will have to be a proposal for the board to vote on by early March.

Realignment proposals for the other eight fall sports for 5A, 4A and 3A were approved.

Board of Control president Rollins Stallworth said at the meeting that the NIAA would allow two state championships within a division, allowing the possibility for an Open Division for the top 5A football teams, which was approved at a Realignment Committee meeting in December.

Football playoff formats were not on the agenda for Thursday’s meeting after the Realignment Committee voted to table the item after three football teams were approved to move from 5A to 4A last week.

The new proposed football realignment has 11 schools in the 5A South. The Desert League includes Arbor View, Bishop Gorman, Green Valley, Las Vegas High and Shadow Ridge, and the Mountain League would be made up of Liberty, Coronado, Desert Pines, Faith Lutheran, Foothill and Silverado.

Mater East will play 3A football, and Sloan Canyon will play as an independent. Cristo Rey St. Viator does not play football.

Green Valley Christian’s appeal to move from the 1A to 2A for all sports was also approved.

The 2023-2024 master activities calendar was also approved, with the first possible day of contests for fall sports, including football, set for Aug. 17.

The board also approved realignment proposals and playoff formats for 2A and 1A.