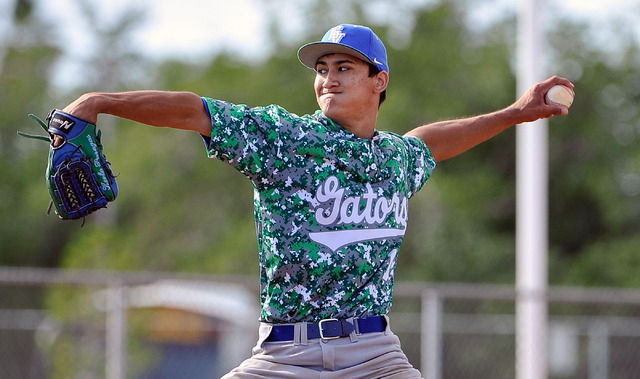 Green Valley’s Keola Paragas was 8-3 with a 1.29 ERA and 79 strikeouts in 65 innings pitched en route to earning the Review-Journal’s player of the year award. (David Becker/Las Vegas Review-Journal) 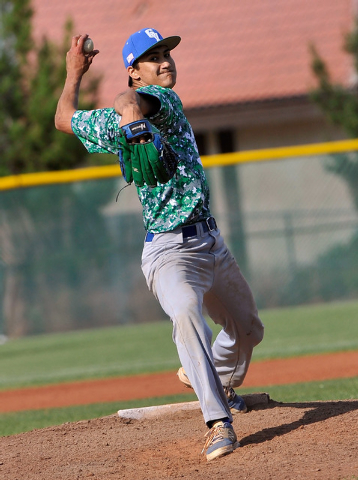 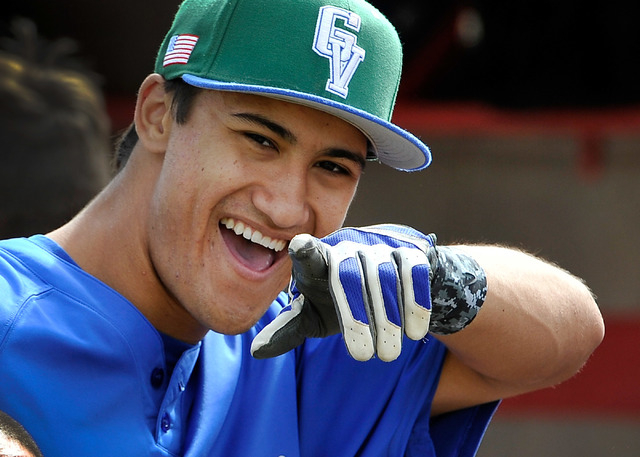 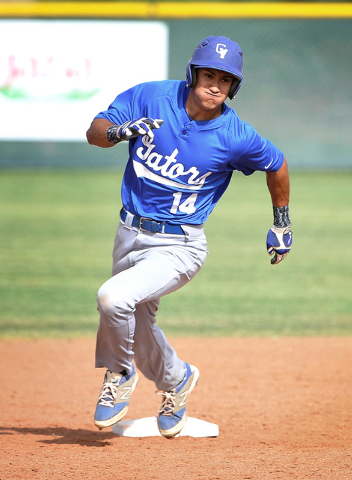 Green Valley’s Keola Paragas rounds second base on his way to a stand-up triple during a recent game against Las Vegas High. (David Becker/Las Vegas Review-Journal)

Green Valley’s Keola Paragas was a bit of a question mark entering his senior year.

But the left-hander, who pitched only one game as a junior, quickly answered those questions with a 17-strikeout outing in fall ball.

“As soon as I saw that, my heart just filled with happiness because I was so glad to see that he was back,” Green Valley coach Corey Gehlken said.

Paragas was more than back. He was dominant.

He posted an 8-3 record with a 1.29 ERA and 79 strikeouts in 65 innings. Paragas also batted .382 with five homers and 36 RBIs, finishing the season as Green Valley’s cleanup hitter. For his efforts, Paragas is the Review-Journal’s player of the year.

“He definitely was the guy that we looked to do everything for us,” Gehlken said. “He was probably our best outfielder, too. He did everything for us this year. That’s why he’s getting the accolades he’s getting. Everything he did was for his teammates. I love when kids do that and get rewarded for those things individually, as well.”

Paragas tweaked his elbow playing center field for Green Valley’s club team in the January 2013. He made one start as a junior and lasted only two innings before being shut down for the season.

He didn’t return to the mound until the fall of his senior year.

“It’s tough for such a competitor to kind of lose a year,” Gehlken said. “We probably over-rested him as a junior, but obviously his family made the right decision in letting him rest and get 100 percent. He came back to have the year of a lifetime. And the kind of year he had, he’ll remember forever.”

Paragas’ meager ERA is even more impressive considering it was inflated by two outings on short rest in the postseason. Without those appearances, in which he gave up seven earned runs in five innings, Paragas’ ERA was 0.58.

Even on a team with another outstanding lefty in Ryan Jackson, Paragas emerged as the Gators’ ace. Jackson, who has signed with Kansas, went 10-0 with a 1.07 ERA, giving Green Valley an unparalleled 1-2 punch.

“(Paragas) pitched every big game for us,” Gehlken said. “Ryan, he was phenomenal, too, but Keola just wanted the ball in every situation. He was such a competitor.”

That competitiveness was evident in Paragas’ stats. He threw first-pitch strikes 65.6 percent of the time, and even while throwing eight complete games, he topped 100 pitches only twice all year.

“It’s just his competitiveness and aggressiveness,” Gehlken said. “That’s probably his No. 1 attribute. He’s not afraid to go right after guys.”

Gehlken said Paragas showed that same competitiveness and belief at the plate, and by the end of the season, there was no one Gehlken would rather have in the batter’s box in a big situation.

“We’ve always known the potential was there for him to swing the bat like that,” Gehlken said.

Paragas doesn’t have a huge fastball, instead pitching in the 86-88 mph range. He throws a cutter and a breaking ball that he has a knack for starting in the left-handed batter’s box and bringing back over the corner.

He’s committed to Salt Lake Community College, but now is getting some looks from Division I schools. Gehlken thinks a major league organization could find a real gem if it looks beyond the radar gun.

“I think if someone gives him a chance, he could do a lot of damage,” Gehlken said. “He’s good. He attacks. We have some hitters in our town that are top notch.

“Scouts really love athletes on the mound these days. I’m not sure there’s a whole lot better athletes out there than him.”