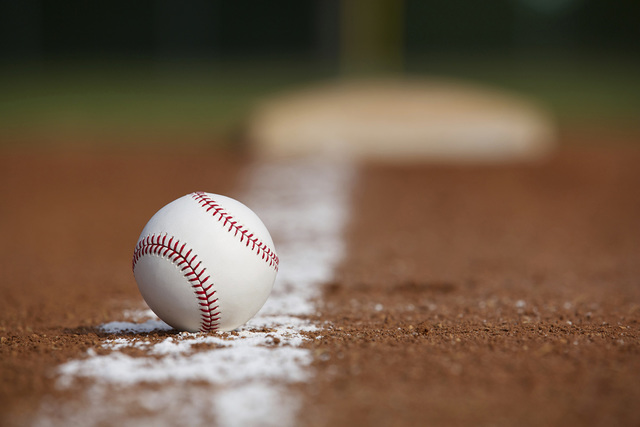 Jerald Murray threw a six-hitter with four strikeouts to lead Silverado’s baseball team to a 1-0 home win over Liberty on Friday.

Dax Fellows singled in the bottom of the first inning and scored on a passed ball for the game’s only run.

Bishop Gorman 8, Sierra Vista 2 — At Bishop Gorman, Nick Hernandez was 2-for-3 with a double and three RBIs, and Jorel Hingada hit a solo homer to help the Gaels top the Mountain Lions.

Austin Wells was 2-for-4 with a triple and an RBI, and Tyler Curtis and Braxton Wehrle each went 2-for-3 with an RBI for Gorman.

Vinnie DeCesare pitched five innings of scoreless relief to earn the victory. DeCesare allowed one hit and struck out seven.

Zachary Kreithe was 1-for-3 and drove in a run, and Cody Culpepper was 2-for-3 with a double for Sierra Vista.

Mojave 8, Sunrise Mountain 3 — At Sunrise Mountain, Elijah Glaze went 2-for-4 with a double, and winning pitcher Kevin Gutierrez gave up only one earned run over four innings to lead the Rattlers past the Miners.

Scott Wilson struck out four in three innings of relief to earn the save, and Josh Kelly and Dylan Smith each doubled for Mojave, which trailed 2-0 after two innings.

The Rattlers scored two runs in the fifth to grab a 4-2 lead and pulled away with a three-run seventh.

Daltyn Pytrysson and Brian Ruiz each doubled for Sunrise Mountain, and Roderick Williams struck out six in 4 1/3 innings in a losing effort.

Legacy 10, Boulder City 0 — At Boulder City, Forrest Grevelis had a two-run double in the first inning, and Jordan Crawford was 3-for-3 with a double and an RBI to lift the Longhorns to a five-inning win over the Eagles.

Grevelis added a sacrifice fly in the third inning and finished 2-for-2 with three RBIs.

Logan Berrier went the distance for the Longhorns, allowing four hits and striking out two.

Foothill 10, Eldorado 0 — At Foothill, Tommy Dirk went 2-for-3 with a triple, home run, three runs and two RBIs, and Anthony Pannullo had a triple and two RBIs in the Falcons’ rout of the Sundevils in six innings.

Winning pitcher Kelton Lachelt struck out five over five innings and was 2-for-3 at the plate, and teammate Jake Perales doubled for Foothill, which scored in every inning.

Las Vegas 12, Valley 1 — At Valley, Payton Miller had three hits, and the Wildcats defeated the Vikings in five innings.

David Campbell and Kevin Verduzco each had a double for Las Vegas.

Desert Oasis 16, Durango 6 — At Durango, Brett Brocoff went 2-for-2 with a double and three RBIs, and Cole Schaefer was 2-for-3 with four RBIs to lead the Diamondbacks over the Trailblazers in six innings.

Parker Schimdt was 1-for-2 with three RBIs, and Kyle Fuentes doubled for Desert Oasis, which led 10-5 after three innings.

Bonanza 14, Clark 4 — At Bonanza, Jay DeSoto homered and drove in three runs, and Matthew Cox was 3-for-4 with two RBIs to help the Bengals beat the Chargers in six innings.

Torren Brozovich was 2-for-4 with a double and an RBI, and Brandon Rivera drove in two runs for Bonanza.

Dezmond Cushon was 2-for-3 with a double and an RBI to lead Clark.

Pahrump Valley 15, Western 5 — At Pahrump, Josh Ferrer earned the win and went 3-for-4 with a pair of RBIs to lead the Trojans to a five-inning win over the Warriors.

Parker Hart went 2-for-4 with a double and three RBIs, and Drew Walker and Cyle Havel each doubled for Pahrump Valley, which led 9-2 after two innings.

Gonzalo Lopez was 2-for-3 for Western.

Desert Pines 12, Cheyenne 2 — At Desert Pines, Ricardo Nicosia went 1-for-3 with a triple and three RBIs as the Jaguars routed the Desert Shields in five innings.

Daniel Mendez went 2-for-2 with a double and two RBIs for Desert Pines, which scored 11 runs in the bottom of the second inning.

Cesar Bailon gave up two unearned runs on four hits with seven strikeouts to pick up the win.

Titus Quintanilla went 3-for-3 with a double for Cheyenne.

Pahranagat Valley 17-17, Sandy Valley 0-0 — At Sandy Valley, Stockton Maxwell threw a no-hitter with one walk and drove in two runs at the plate in the nightcap as Panthers swept a doubleheader over the Sidewinders.

Seth Isola singled and had a stolen base for Sandy Valley.

Indian Springs 15-15, Beaver Dam (Ariz.) 0-0 — At Indian Springs, Wrench Perry was 3-for-4 with a home run, double and four RBIs in the opener of the Thunderbirds’ doubleheader sweep of the Diamondbacks.

Nino Alvarez was 3-for-4 with two doubles and three RBIs, and Devon Sickler finished 2-for-4 with a double and two RBIs for Indian Springs.

In the second game, Phillip Reimer was 3-for-4 with two doubles to lead the Thunderbirds.

Zack Reimer and Dillon Pollock each went 2-for-4 with a double for Indian Springs.

Lincoln County 4-3, Laughlin 0-1 — At Panaca, the Lynx turned to solid pitching performances in their doubleheader sweep of the Lions.

Kobe Walker threw a shutout in the opener, and Hunter Wilkin pitched six innings of one-run ball to earn the victory in the nightcap.

Teammate Alex Vincent pitched an inning of relief in the second game to earn the save.

In the opener, winning pitcher Corbin Jensen struck out eight over five innings and hit two doubles at the plate. Payton Brown homered, and Jacob Dickens doubled for Round Mountain.

In the nightcap, Diego Rodriguez went 3-for-4 with a homer, three runs and five RBIs, and Jensen was 3-for-4 with a double, homer and four RBIs for the Knights.

Tyler Gholston homered, and Torres doubled for the Golden Eagles.