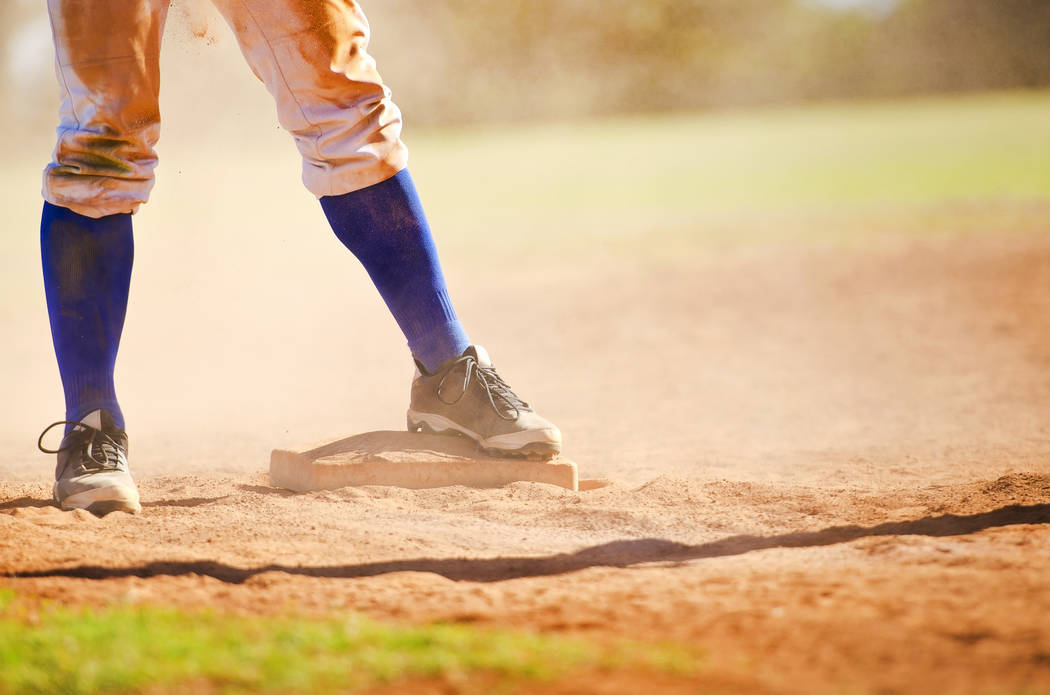 Godman led off with a single and moved to third on an errant pickoff attempt. J.D. Brooks was intentionally walked, and Godman scored on Cosby’s bunt.

Godman then retired the side in order in the seventh to preserve the win.

Godman went 3-for-3 with two runs, and Jaret Godman had a solo home run for the Panthers.

Bryan Trujillo went 2-for-4 with two runs for Shadow Ridge, which scored four runs in the top of the sixth to tie the game at 5-5.

Desert Pines 6, Chaparral 5 — At Desert Pines, Cesar Bailon was 2-for-3, including a go-ahead two-run triple in the bottom of the fifth inning, as the Jaguars nipped the Cowboys.

Winning pitcher Raymond Minero also provided a two-run triple in the fifth inning for Desert Pines, which got a triple from Daniel Mendez.

Basic 6, Liberty 5 — At Basic, Andrew Rangel scored the game winning run in the bottom of the sixth on a throwing error, helping the Wolves edge the Patriots.

Pahrump Valley 5, Moapa Valley 4 — At Pahrump, Cyle Havel went 2-for-4 with a pair of RBIs to lead the Trojans over the Pirates.

Parker Hart went 2-for-4 with a double for Pahrump, which had eight hits.

Garrett Lucas pitched three scoreless innings to record the save for the Trojans.

Desert Oasis 6, Sierra Vista 3 — At Sierra Vista, Nic Lowe went 3-for-4 with four RBI,s and Andrew Martinez was 3-for-5 with two RBIs as the Diamondbacks topped the Mountain Lions.

Cody Culpepper went 2-for-3 with a triple for Sierra Vista.

Del Sol 9, Mojave 6 — At Mojave, Brady Walton was 3-for-5 with three RBIs to help the Dragons take down the Miners.

Jose Galicia and Gelkis Digurnay each went 2-for-4 for Del Sol, and Galicia had a pair of RBIs.

Phil Talamo threw 6⅓ innings of relief for the Dragons and struck out seven.

Centennial 6, Arbor View 1 — At Centennial, Kyle Horton went 4-for-4 with two doubles and three RBIs to power the Bulldogs over the Aggies.

Jake Rogers was 2-for-2 with a double and two runs for Centennial, which took control with a four-run first inning.

Garrett Holden threw a four-hitter with eight strikeouts and no walks to get the win.

Joe Fitzhugh was 2-for-2 with a double and a solo home run for Arbor View.

Bishop Gorman 7, Bonanza 0 — At Bonanza, John Gaughan was 2-for-3 with two doubles, two runs and an RBI, and Bryce Ruggeroli went 2-for-3 with a home run, two RBIs and a run to lead the Gaels past the Bengals.

Ryan Sepede was 2-for-3 with a run and an RBI for Gorman, which scored five runs in the first inning. Austin Wells went 1-for-2 with two RBIs for the Gaels.

Spring Valley 16, Clark 0 — At Clark, Jaxson Otis spun a no-hitter and went 4-for-4 with a double, two RBIs and three runs as the Grizzlies routed the Chargers in four innings.

Jonathan Bakken was 3-for-3 with a triple and three RBIs for Spring Valley, which got a three-run double from Humberto Maldonado.

Boulder City 16, Cheyenne 2 — At Cheyenne, Anthony Pacifico went 4-for-4 with two doubles and four RBIs, and the Eagles downed the Desert Shields in five innings.

D.J. Reese went 2-for-4 with two RBIs, and Noah Higgins was 2-for-2 with a double and two RBIs to lead Boulder City. Nolan Herr also had two RBIs for the Eagles.

Angel Astorga and Christopher Rose each went 1-for-2 with an RBI for Cheyenne.

Tech 17, Sunrise Mountain 1 — At Sunrise Mountain, Gabe Kermode threw a four-hitter with eight strikeouts and went 2-for-3 with three RBIs and two runs as the Roadrunners routed the Miners in five innings.

Trevor Kephart went 3-for-3 with a triple two RBIs and three runs for Tech, and Jayce Otis went 2-for-3 with a double and four runs.

Sean Jones and Jason Collingbourne each went 2-for-3 with two runs and two RBIs for the Roadrunners.

Virgin Valley 15, Western 4 — At Western, the Bulldogs routed the Warriors.