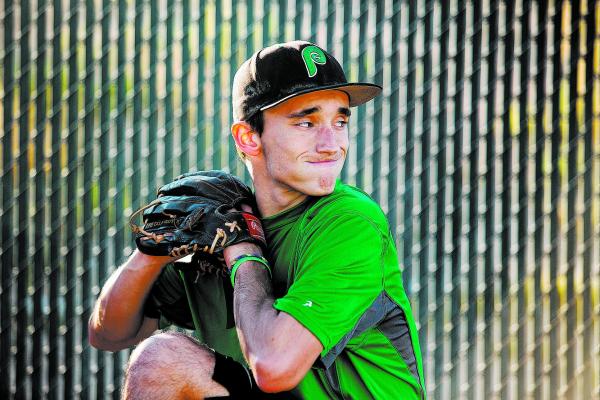 Palo Verde senior Michael Spada practices pitching at the school Wednesday. Last weekend, Spada made an oral commitment to play baseball at Holy Cross in Worcester, Mass., 3½ years after being diagnosed with Burkitt lymphoma. He dropped to 92 pounds while fighting the illness. 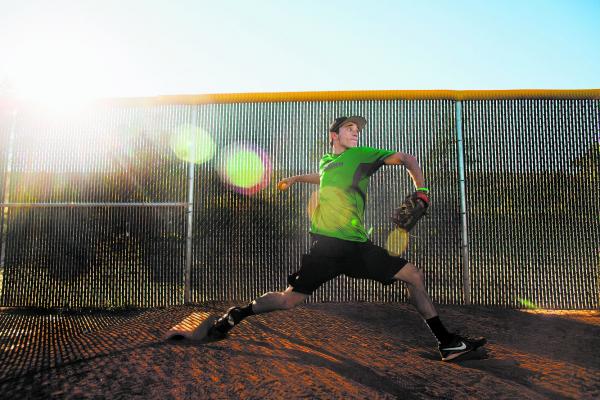 Palo Verde pitcher Michael Spada throws in the bullpen at the school. Spada recently committed to play at Holy Cross.

Michael Spada called his mom from the airport on Sunday with the news. And Denise Spada started crying, because that’s what moms usually do when they hear their son will be attending college.

Tony Spada was listening in on the conversation and started crying, too, because that’s what dads usually do when they learn their son will have a chance to play Division I baseball.

But Michael Spada didn’t cry. Not one tear.

He always knew he would make that phone call one day.

“I understood the magnitude of the moment, but not necessarily because of how far I’ve come,” Michael Spada said. “All the time I was in the hospital, I never thought I wasn’t going to college. It was never a matter of if but when. I just knew I would beat it and everything would work itself out.”

Last weekend, Spada made an official visit to Holy Cross in Worcester, Mass., and orally committed to play baseball for the Crusaders. Spada’s pledge to the Patriot League school came less than five months after the senior at Palo Verde was declared cancer-free by his doctor.

Hence, all those tears from Mom and Dad.

“Michael will make fun of his dad and I,” Denise Spada said, “but it’s a big deal for us. Three-and-a-half years ago, I couldn’t imagine this happening.”

As an eighth-grader in March 2010, Spada was diagnosed with Burkitt lymphoma, an aggressive form of non-Hodgkin lymphoma that is rare in the United States. He underwent four months of chemotherapy, spending two weeks at a time in a hospital and one week at home.

While in the hospital, Spada garnered publicity after he noticed how uncomfortable the blankets were and started a blanket drive. Since then, “Michael’s Blanket Drive for Cancer” has donated more than 5,000 blankets to Sunrise Children’s Hospital, according to Tony Spada.

When he wasn’t gathering blankets, Michael Spada was thinking about baseball. At one point, the hospital even made special accommodations so he could watch it on TV.

“It was during spring baseball when I should have been out on the field,” Spada said. “That was the driving force behind me getting better. Once that last drop (of chemotherapy) came, baseball was at the forefront of my mind.”

Spada, who dropped to as light as 92 pounds during his illness, made it back on the field in time for fall workouts as a freshman at Palo Verde, though he hadn’t returned to full strength.

“I was pretty weak, but I did my best out there,” Spada said. “The only way to get back to where I was was to work. I tried not to take reps off or any drills off.”

Spada played junior varsity for the Panthers his first two years. As a junior, he hit .311 and was a second-team All-Northwest League selection before helping Palo Verde’s American Legion team reach the state tournament for the first time since 2007.

“Michael is the quintessential battler,” second-year Palo Verde coach Kevin Fiddler said. “You know that kid who will go up to the plate and fight off pitch after pitch until he gets a big, fat one down the middle that he can drive in the gap? That’s Michael. He’s a battler in life and on the baseball field.”

The 5-foot-11-inch Spada is up to 155 pounds. In the spring, he is expected to play second base and right field when he isn’t pitching for the Panthers.

“He worked hard for 3½ years to get back in shape,” Tony Spada said. “For Holy Cross to recognize what this young man is about and his accomplishments over the years, to get where he is today, I’m just so proud. Like I’ve told him in the past, he’s my hero.”