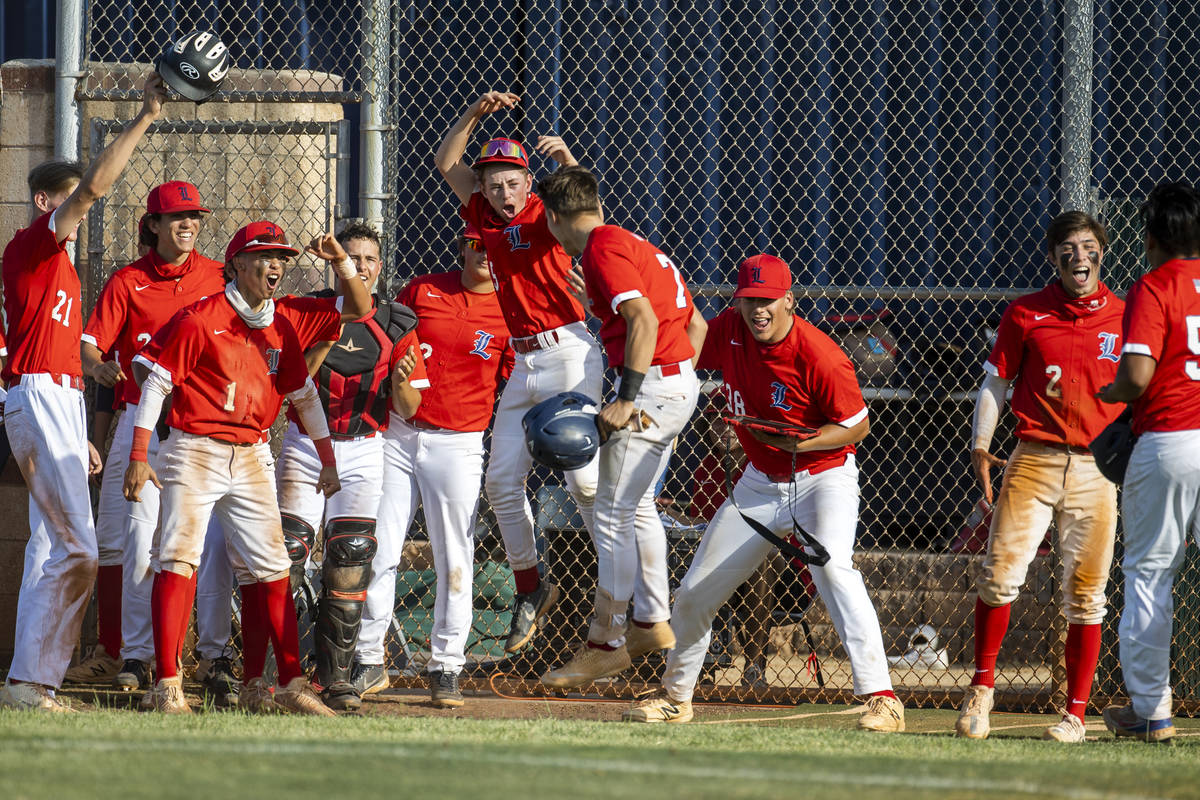 Liberty runner Chase Gallegos (7) is celebrated by teammates after scoring versus Arbor View during the third inning of a first-round NIAA regional baseball tournament game at Liberty High School on Monday, May 17, 2021, in Henderson. (L.E. Baskow/Las Vegas Review-Journal) @Left_Eye_Images

Aisah Findlay drove in Riley Blake with a double that proved to be the winning run as part of a two-run seventh inning as No. 9 Desert Oasis stunned top-seeded Green Valley 8-6 in the Class 5A Southern Region softball tournament Tuesday at Green Valley High.

The Diamondbacks’ 2-5 hitters had all nine of their hits and all seven of their RBIs. Blake picked up the win with three runs allowed in four innings of relief.

Desert Oasis will play at No. 4 Shadow Ridge at 4 p.m. Wednesday.

No. 4 Shadow Ridge 2, No. 5 Palo Verde 1 — At Shadow Ridge, Hailey Morrow’s line drive in the seventh inning was mishandled in left field, allowing Lorelei Woodward to score the winning run.

Morrow homered in the first inning in support of Josslin Law, who threw a four-hitter and didn’t allow an earned run.

No. 2 Centennial 3, No. 7 Rancho 0 — At Centennial, Madison Lucero threw a one-hit shutout, and Jordyn Ramos homered for the Bulldogs.

Centennial will host No. 3 Arbor View at 4 p.m. Wednesday.

No. 3 Arbor View 11, No. 6 Faith Lutheran 1 (six innings) — At Arbor View, the Aggies scored six runs in the second and four in the third.

Trinity Brandon was 3-for-3 with a triple and five RBIs for Arbor View.

No. 6 Coronado 7, No. 3 Centennial 1 — At Centennial, Austin Cates allowed one unearned run on two hits in six innings as the Cougars upset the Bulldogs.

Cates was one of three Cougars with two hits apiece, and Caden Denning, Jarrett Kenyon and Parker Vint drove in two runs apiece for Coronado, which will play at No. 2 Palo Verde at 4 p.m. Wednesday.

No. 2 Palo Verde 12, No. 7 Cimarron-Memorial 0 (five innings) — The Panthers broke the game open with a nine-run third inning and allowed one hit.

No. 1 Bishop Gorman 16, No. 8 Faith Lutheran 1 (three innings) — Tyler Whitaker was 3-for-4 with a triple, four RBIs and two runs scored for the Gaels.

The Gaels will host No. 5 Liberty, which handed them their only regular-season loss, at 4 p.m. Wednesday.

No. 11 Green Valley 11, No. 14 Las Vegas 10 — Chaz McNelis’ two-run single in the seventh inning was the difference as the Gators overcame the Wildcats’ nine-run fourth inning in an elimination game.

Spencer Blackwell, Sierra Vista — The senior threw a four-hit shutout with eight strikeouts in a 2-0 win over Durango.

Austin Cates, Coronado — The senior allowed one unearned run on two hits and struck out five in six innings and was 2-for-3 with a double in a 7-1 win over Centennial.

Brock Gaston, Green Valley — The junior was 2-for-3 with a double, a home run, two RBIs and two runs scored in an 11-10 win over Las Vegas.

De’jon Mitchell, Legacy — The junior was 4-for-5 with two doubles, four RBIs and two runs scored in a 16-15 win over Tech.

Tyler Whitaker, Bishop Gorman — The senior was 3-for-3 with a triple, four RBIs and two runs scored in a 16-1 win over Faith Lutheran.

Trinity Brandon, Arbor View — The junior was 3-for-3 with a double, five RBIs and a run scored in an 11-1 win over Faith Lutheran.

Aisah Findlay, Desert Oasis — The sophomore was 2-for-4 with a double, four RBIs and two runs scored in an 8-6 win over Green Valley.

Josslin Law, Shadow Ridge — The freshman allowed one unearned run and four hits with six strikeouts in a complete-game 2-1 win over Palo Verde.

Taylor Lindahl, Las Vegas — The sophomore was 3-for-4 with two doubles, a home run, four RBIs and two runs scored in a 22-12 loss to Tech.

Madison Lucero, Centennial — The junior threw a one-hit shutout with four strikeouts in a 3-0 win over Rancho.