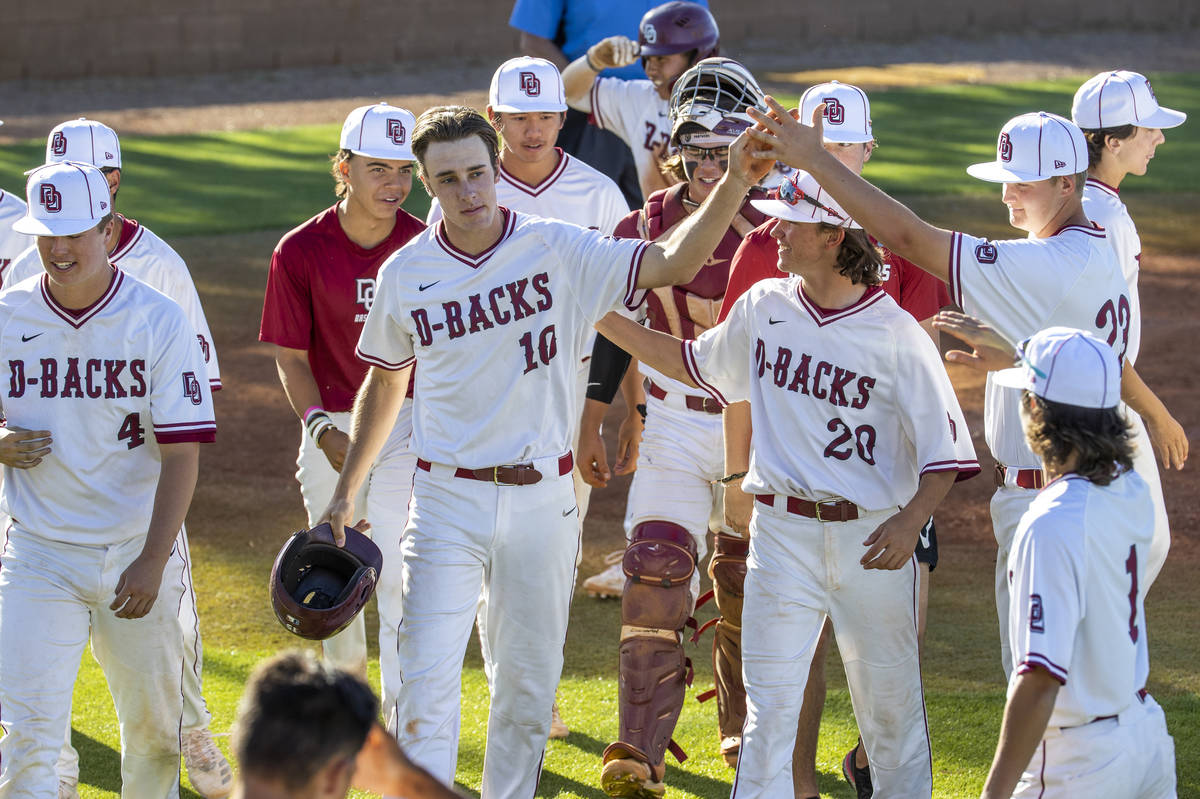 Desert Oasis High School runner Tyler Stott (10) is congratulated by teammates after hitting a home run and others in versus Basic during the fifth inning of an NIAA baseball game on Tuesday, May 11, 2021, in Las Vegas. (L.E. Baskow/Las Vegas Review-Journal) @Left_Eye_Images

Desert Oasis, the last Nevada team to win a state title at the highest level of baseball, showed its championship mettle Thursday with two wins in the Class 5A Southern Region tournament at Liberty High.

Adrian Mejia threw a complete-game four-hitter with five strikeouts, and the Diamondbacks scored three runs in the third inning and six in the fourth to put No. 5 Liberty away 9-1 after surviving a 10-9 game against No. 4 Basic.

Desert Oasis, which won the 2019 state title, will play at No. 1 Bishop Gorman in the pod finals at 2:30 p.m. Friday. If the Diamondbacks win, the teams will play again at 5, with the winner advancing to Saturday’s championship game.

No. 3 Centennial 7, No. 6 Coronado 6 — At Coronado, David Lally’s single in the sixth inning scored Tucker Berg with the decisive run.

Brendan Ray and Ryan Martinez combined for 3 1/3 innings of shutout relief after Coronado took a 6-2 lead with a six-run fourth inning. The Bulldogs scored four times in the bottom of the fourth to tie the game.

Centennial scored eight runs in the first inning and cruised past No. 7 Cimarron-Memorial 11-0 in five innings earlier Thursday.

Centennial will play at No. 2 Palo Verde in the pod finals at 1:30 p.m. Friday. The teams will meet against at 4 if Centennial wins the first game.

No. 3 Arbor View 7, No. 6 Faith Lutheran 5 — At Arbor View, Makena Strong homered, and Kylie Sharapan was 3-for-4 with two doubles and a triple for the Aggies.

Faith Lutheran threatened with a three-run seventh before Arbor View’s Annie Finch finished the complete game. She allowed nine hits and struck out eight to get the win.

Earlier Thursday, Faith Lutheran scored on two errors from No. 7 Rancho, the latter of which brought home Lydia Whipple with the game-winning run in an 11-10 decision in nine innings.

Arbor View will head to No. 2 Centennial for a pod final at 2:30 p.m. Friday. A second game is set for 5 if the Aggies win the first game.

No. 1 Green Valley 7, No. 9 Desert Oasis 6 (suspended) — At Desert Oasis, the Gators had just taken the lead in the bottom of the sixth on a single from Angelina Ortega that scored Aspyn Beattie when play was suspended because of darkness.

The game will resume at noon Friday at Shadow Ridge, with the winner to face No. 4 Shadow Ridge in the pod final at 2:30 p.m. A second game will follow at 5 if needed.

Green Valley survived a 19-hit attack from No. 8 Sierra Vista by scoring seven runs in the first and six in the sixth to secure a 16-14 win earlier Thursday.

The Shadow Ridge girls posted 217 points and the Legacy boys 191 to claim the team titles at the Class 4A Mountain Region meet Thursday at Foothill High.

Chris Cortez, Silverado — The senior was 6-for-8 with three doubles, a triple, seven RBIs and four runs scored in wins over Bonanza (11-3) and Shadow Ridge (14-8).

Chris Larkin, Centennial — The senior was 4-for-5 with two doubles, four RBIs and three runs scored in wins over Cimarron-Memorial (11-0) and Coronado (7-6).

Kalsey Kekahuna-Lopes, Sierra Vista — The senior was 3-for-5 with a double, a triple, three RBIs and three runs scored in a 16-14 loss to Green Valley.

Jill Molnar, Faith Lutheran — The freshman was 6-for-9 with three doubles, four RBIs and three runs scored in an 11-10 win over Rancho and 7-5 loss to Arbor View.

Kylie Sharapan, Arbor View — The senior was 3-for-4 with a double, a triple, an RBI and two runs scored in a 7-5 win over Faith Lutheran.

Wednesday’s game between Basic and Green Valley was ruled a double forfeit after a postgame brawl, and both teams will forfeit their first regional tournament game.