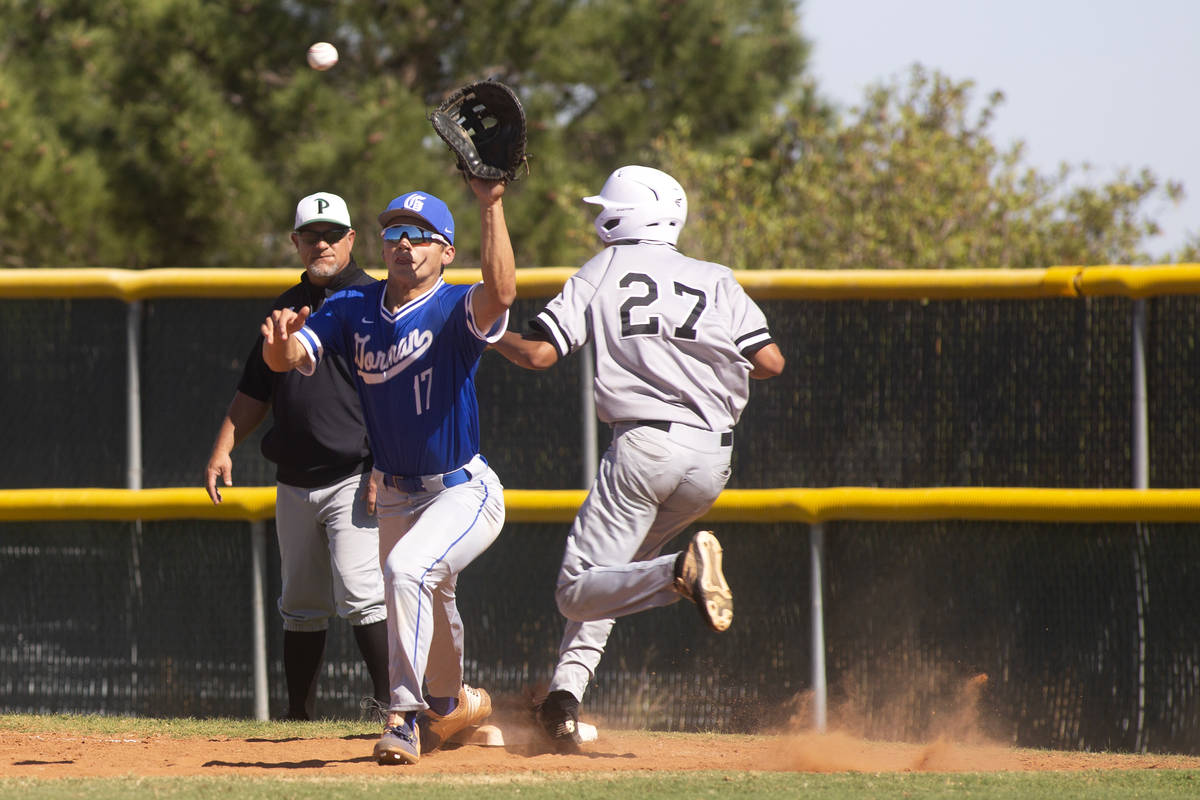 The Gaels showed that Friday, all the way to their last strike.

Tai Nguyen doubled on a 1-2 pitch with two outs in the bottom of the seventh inning and scored Tyler Whitaker and Tommy Rose, capping a three-run inning and lifting top-seeded Gorman to a 5-4 home win over No. 9 Desert Oasis in the Class 5A Southern Region tournament.

Desert Oasis led 5-1 in the fifth inning but couldn’t hold on. The Gaels advanced to the championship game and will host No. 2 Palo Verde at 4 p.m. Saturday.

Whitaker, who homered in the fourth to get Gorman on the board, started the seventh-inning rally with an RBI double that brought Maddox Riske home. Payton Riske earned the win on the mound with a scoreless inning.

No. 2 Palo Verde 15, No. 3 Centennial 9 — Karthik Gondy and Tommy DiLandri homered, and the Panthers answered a three-run Bulldog first with nine in the bottom of the frame and rolled to victory.

Gondy also had a double as part of a 3-for-5 day with three RBIs and three runs scored, and DiLandri drove in three runs to help Palo Verde clinch a championship berth.

No. 3 Arbor View 2-7, No. 2 Centennial 0-4 — At Centennial, Annie Finch pitched a five-hit shutout in the first game, and Makena Strong and Paige Kellogg homered in the second to lift the Aggies into the championship game.

Arbor View will host No. 4 Shadow Ridge at noon Saturday. The Aggies scored three runs in the third inning of the second game Friday to take a 4-1 lead and added single runs in the fourth, fifth and sixth to keep the Bulldogs at bay.

No. 4 Shadow Ridge 3, No. 1 Green Valley 2 — At Shadow Ridge, Hailey Morrow, Abby Covington and Kimberly Hernandez drove in a run apiece to push the Mustangs into the championship game.

Josslin Law allowed 11 hits but managed to limit the Gators to two runs in a complete-game win. She struck out five and didn’t walk a batter.

Abby Cordova, Mikee Morris and Hannah Watson, Green Valley’s 2-4 hitters, were 8-for-12 and drove home both of the Gators’ runs.

Chris Cortez, Silverado — The senior was 5-for-9 with a triple, five RBIs and four runs scored in 15-3 and 12-2 wins over Foothill.

Karthik Gondy, Palo Verde — The senior was 3-for-5 with a double, a home run, three RBIs and three runs scored in a 15-9 win over Centennial.

Andrew Maxwell, Silverado — The senior was 3-for-5 with a double, a triple, an RBI and three runs scored in 15-3 and 12-2 wins over Foothill.

Peter Torbicki, Sierra Vista — The senior allowed one unearned run on three hits and struck out four in a complete-game win.

Tyler Whitaker, Bishop Gorman — The senior was 2-for-3 with a double, a home run, two RBIs and a run scored in a 5-4 win over Desert Oasis.

Annie Finch, Arbor View — The junior threw two complete games, including a five-hit shutout with five strikeouts, in 2-0 and 7-4 wins over Centennial.

Katelyn Hunter, Bishop Gorman — The senior was 3-for-4 with two home runs, four RBIs and three runs scored in a 15-5 win over Durango.

Maria Jimenez, Silverado — The sophomore was 3-for-4 with a home run, five RBIs and two runs scored in an 18-8 win over Las Vegas.

Josslin Law, Shadow Ridge — The freshman allowed 11 hits but only two runs and struck out five in a complete-game 3-2 win over Green Valley.

Riley Price, Virgin Valley — The sophomore was 3-for-3 with two home runs, seven RBIs and two runs scored, threw a three-hit shutout with six strikeouts in an 11-0 win over Boulder City.