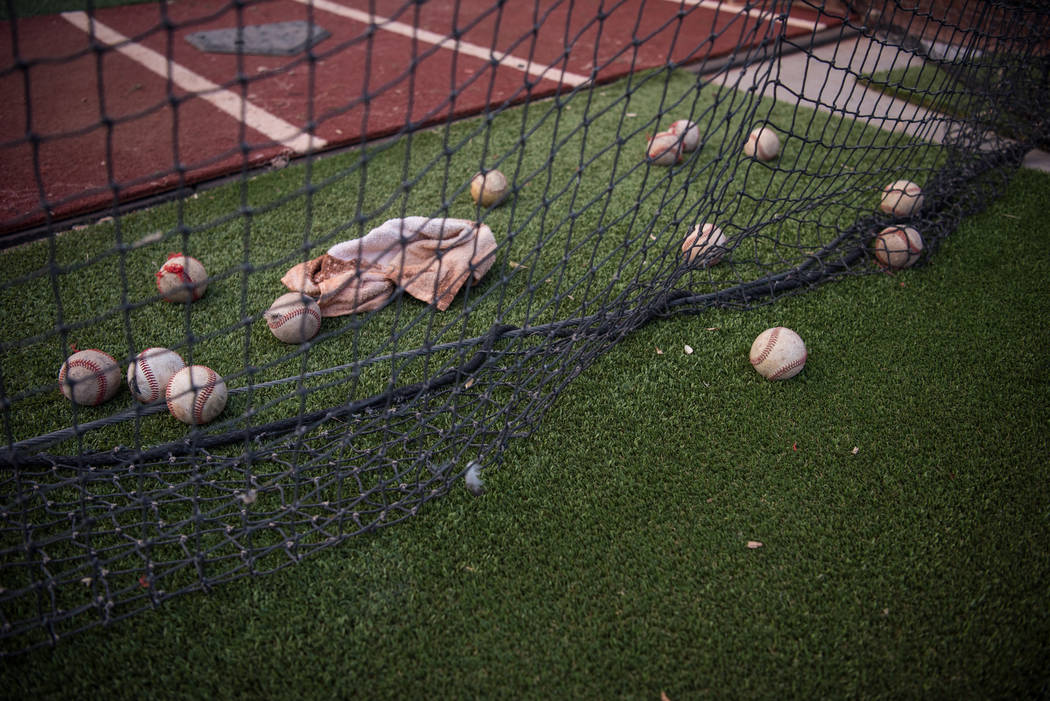 Campbell Holt’s bases-loaded single to right field with two outs in the bottom of the ninth inning Wednesday lifted Desert Oasis’ baseball team to a 4-3 win over Delbarton (N.J.) in the opening round of the National High School Invitational in Cary, North Carolina.

Holt’s hit plated Colton Zobrist with the winning run as the Diamondbacks advanced to the tournament quarterfinals.

Zobrist started the rally with a walk. He took second on a passed ball with one out, then moved to third on Parker Schmidt’s fielder’s choice grounder to short. With two outs, Aaron Roberts was intentionally walked to load the bases for Holt, who finished 2-for-5.

Palo Verde 5, Las Vegas 2 — At Palo Verde, Nate Bartlett scored the tie-breaking run on a passed ball in the sixth inning as the Panthers edged the Wildcats.

Joel Lindahl was 2-for-4 with a home run and an RBI for Las Vegas.

Del Sol 6, Pahrump Valley 4 — At Del Sol, Logan Morgan, Jose Galicia, and Javier Marti each supplied two hits and an RBI, as the Dragons used two runs in the sixth inning to edge the Trojans.

Gelkis Digurnay and Bradley Walton each had two hits, and Jacob Chairsell added an RBI triple for Del Sol.

Jalen Denton and Chase McDaniel each had two hits, and teammate Willie Lucas provided a two-run double to lead Pahrump.

Cimarron-Memorial 14, Cheyenne 7 — At Cimarron, Zach Culver went 3-for-3 with five RBIs to help the Spartans top the Desert Shields.

Andrew Johnson was 1-for-1 with three RBIs for Cimarron, which built a 14-4 lead after two innings.

Joseph Barile and Anthony Pauley each went 2-for-4 for Cheyenne.

Arbor View 8, Clark 3 — At Arbor View, Garrett Cutting was 3-for-3 with a double to lead the Aggies by the Chargers.

Rancho 12, Faith Lutheran 4 — At Rancho, Cris Verdugo went 3-for-3 with a home run, a double, two runs and three RBIs as the Rams downed the Crusaders.

Donovan Gladney was 3-for-3 with a triple and three RBIs, and Matthew Baughn was 3-for-4 with an RBI for Rancho. Raymond Minero went 2-for-4 with a home run and two RBIs for the Rams.

Jacob Ortega was 1-for-3 with two RBIs for Faith Lutheran.

Virgin Valley 11, Pahranagat Valley 1 — At Alamo, Booker Wakefield was 2-for-4 with two doubles, two runs and two RBIs to help the Bulldogs to a six-inning win over the Panthers.

Stevie Fuqua was 2-for-3 with two runs and an RBI for Virgin Valley.

Daxon Toone, Fuqua and Tyler Jensen combined on a two-hitter for the Bulldogs.

Valley 14, Mojave 4 — At Valley, Kollin Losee and Keenan McNair each went 2-for-3 with two runs and two RBIs to lead the Vikings by the Rattlers in six innings.

John Rex Natividad and Gary Bricker each went 2-for-4 with two RBIs for Valley.

Logan Forepaugh was 1-for-2 with a double and two RBIs for Mojave.

Western 14, Democracy Prep 1 — At Western, Mark Gastelum went 2-for-2 with four RBIs, and winning pitcher Christian Perez fired a two-hitter with 13 strikeouts as the Warriors subdued the Blue Knights in five innings.

Gonzalo Lopez hit a single and drove in three runs for Western, which led 10-0 after three innings.

Shadow Ridge 17, Canyon Springs 2 — At Shadow Ridge, Branson Tressler went 3-for-3 with a triple and two RBIs as the Mustangs downed the Pioneers in four innings.

Bonanza 18, Desert Pines 3 — At Desert Pines, Matthew Cox went 3-for-4 with a home run, a triple, a double and four RBIs to power the Bengals to a five-inning win over the Jaguars.

Julian DeLeon was 3-for-4 with two doubles and three RBIs, and Keanu Atienza-Sabagala was 2-for-2 for Bonanza. Jerry Galaviz and Yankiel Gonzalez each went 2-for-4 with an RBI for Bonanza.

Erick Hernandez was 2-for-2, and Jorge Milian was 2-for-3 for Desert Pines.

The Meadows 16-11, Adelson School 2-0 — At The Meadows, Davidson Rufty tossed a three-hitter with five strikeouts and went 3-for-4 with a triple and three RBIs as the Mustangs routed the Lions in five innings in the first game of a doubleheader.

Sam Kaplan went 3-for-3 with a triple and three RBIs, and Brett Lieuallen tripled and drove in two runs for The Meadows.

In the second game, Jerry Applehans and Brandon Medina combined on a five-inning one-hitter with Applehans fanning eight.

Eshaan Verma doubled and drove in a run, and Lars Carlson supplied a hit and two RBIs for The Meadows.

Mordechai Shirit had a double for Adelson School’s only hit.

SLAM Academy 14, Indian Springs 2 — At Indian Springs, Austin Martin was 2-for-4 with a double and three RBIs to help the Bulls down the Thunderbirds in six innings.

Nathan Miller and Ryan Gertz each went 1-for-3 with an RBI for Indian Springs.