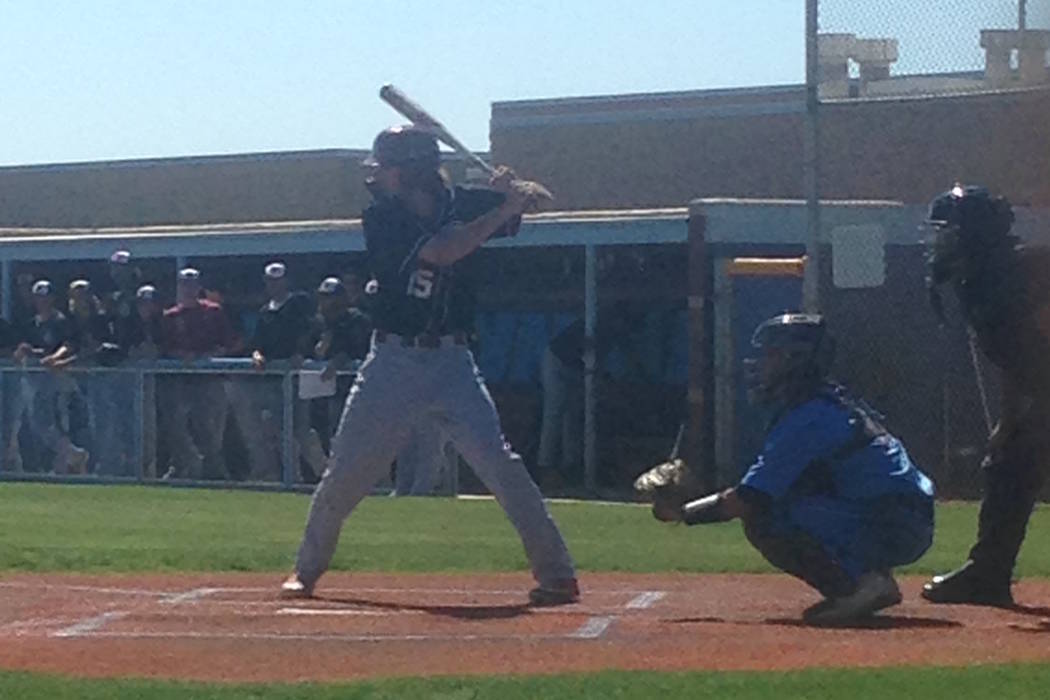 Desert Oasis has used an explosive offense and a lock-down pitching staff to overwhelm most of its local competition this season.

The top-ranked Diamondbacks had neither Saturday and still found a way to win.

Desert Oasis managed just four hits — all singles — and routinely pitched into and out of trouble on its way to a 4-1 baseball win at fourth-ranked Centennial.

“On both sides, it was a little bit sloppy, but in the late innings, we found ways to get a few hits,” Desert Oasis coach Paul Buboltz said. “We’re playing a good team, and if we don’t capitalize better, it’s going to hurt us in the long run.”

The Diamondbacks, who average almost eight runs per game and entered with a team batting average of .375, did have plenty of patience Saturday, drawing 12 walks. A hit batter, four balks and three wild pitches by Centennial hurlers also helped the cause.

Three of the Diamondbacks’ four runs were scored by players who reached on a walk.

“We had a pretty good approach,” Buboltz said. “We stung some balls early on, and they didn’t fall, but that’s baseball.”

Desert Oasis (24-6) had only one hit until consecutive two-out singles by Parker Schmidt, Colby Smith and Aaron Roberts produced two runs in the sixth inning to increase the Diamondbacks’ lead to 4-1.

Centennial (21-8) threatened in every inning despite collecting just three hits. Desert Oasis pitchers walked nine and hit three batters, but worked their way out of trouble.

The Bulldogs left the bases loaded in the third and seventh innings and had the bases loaded with one out in the fifth when Jacob Walsh got Centennial’s Dallan Cave to ground into a double play.

Centennial went 0-for-17 with runners on base and stranded 15 runners, 10 in scoring position.

“You’re playing with fire a lot when you do that, but they found a way to work themselves out of it,” Buboltz said. “Our defense made plays when they had to.”

Desert Oasis faces Basic in a showdown for the Desert League title Wednesday. Centennial can finish as high as second in the Mountain League.

Las Vegas 5, Foothill 3 — At Las Vegas High, Trevor Johnson was 2-for-3 with two RBIs to help the Wildcats edge the Falcons.

Eric Vaccaro went 2-for-3 for Foothill.

Durango 13, Legacy 3 — At Durango, Daniel Hauben went 2-for-3 with a double, two runs and four RBIs as the Trailblazers topped the Longhorns in six innings.

Ryan Barry was 2-for-3 with a double and four RBIs, and Blake Logan went 2-for-3 with two runs for Durango. Adrian Oles and Irvin Weems each went 1-for-2 and scored three runs for the Trailblazers.