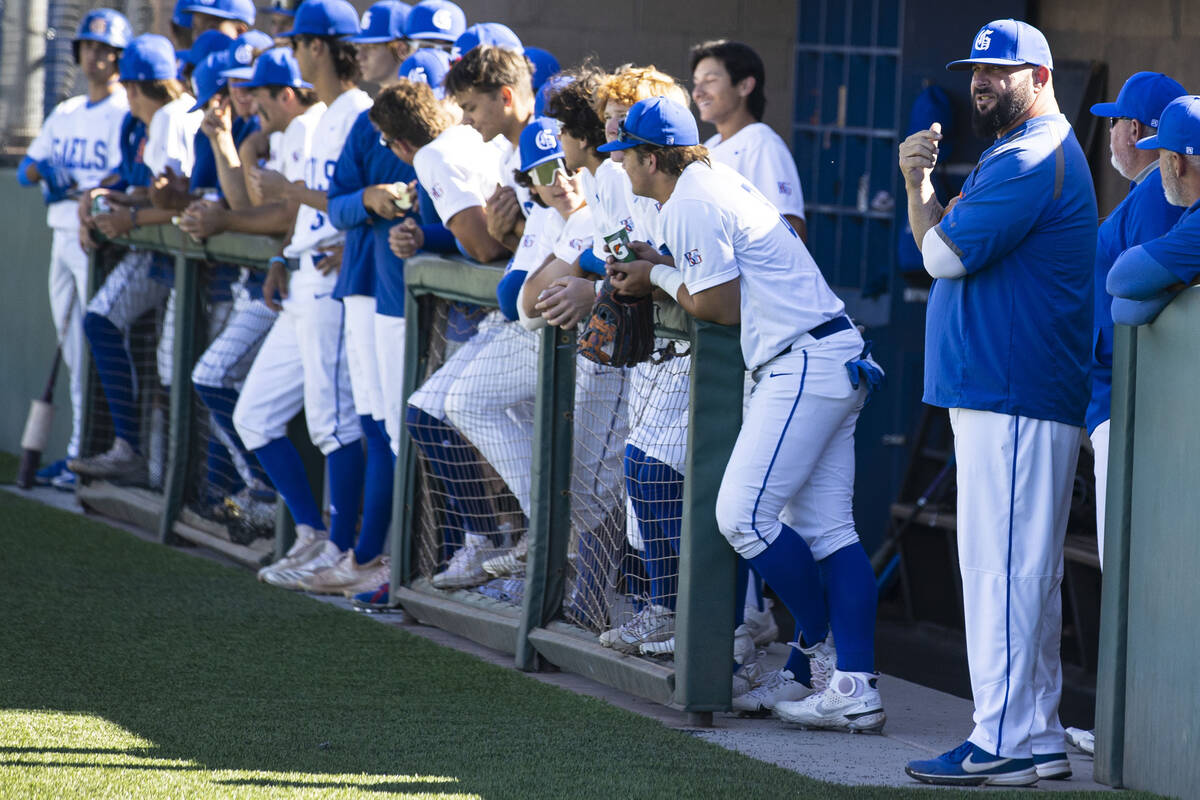 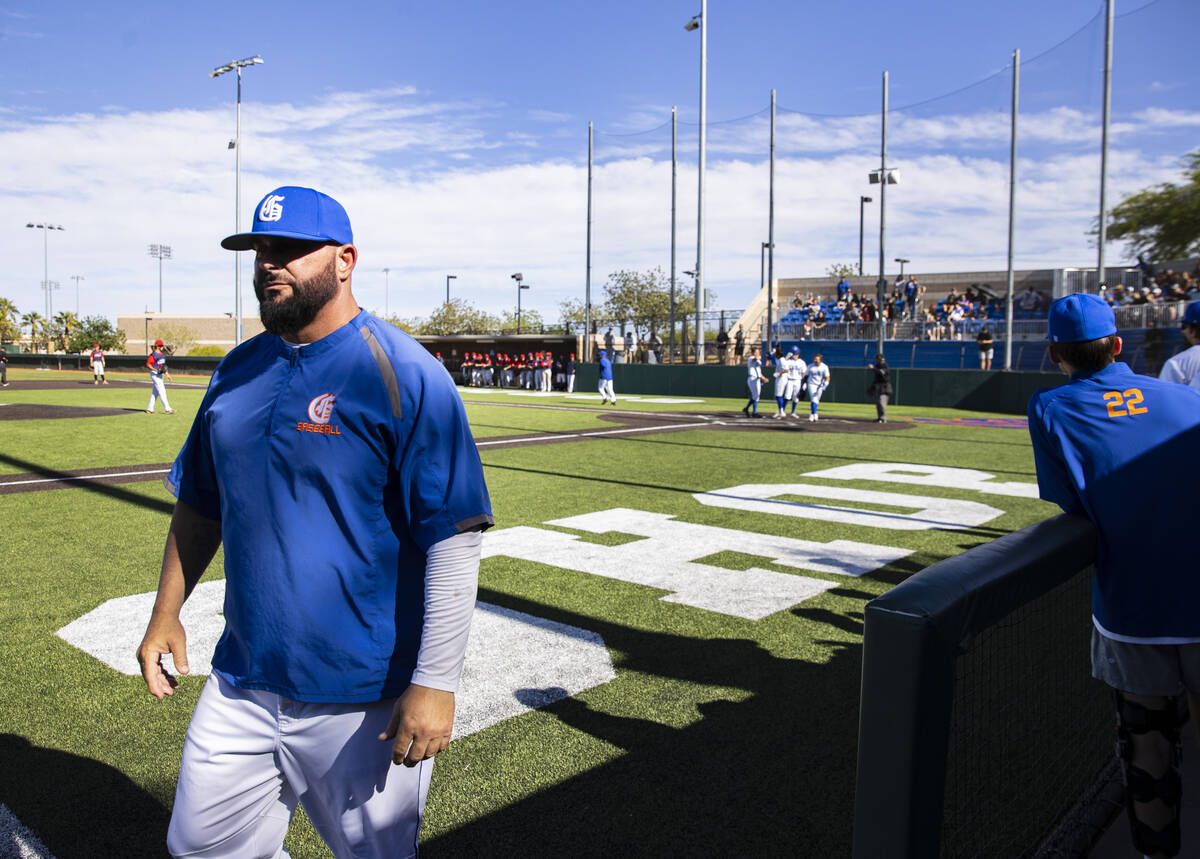 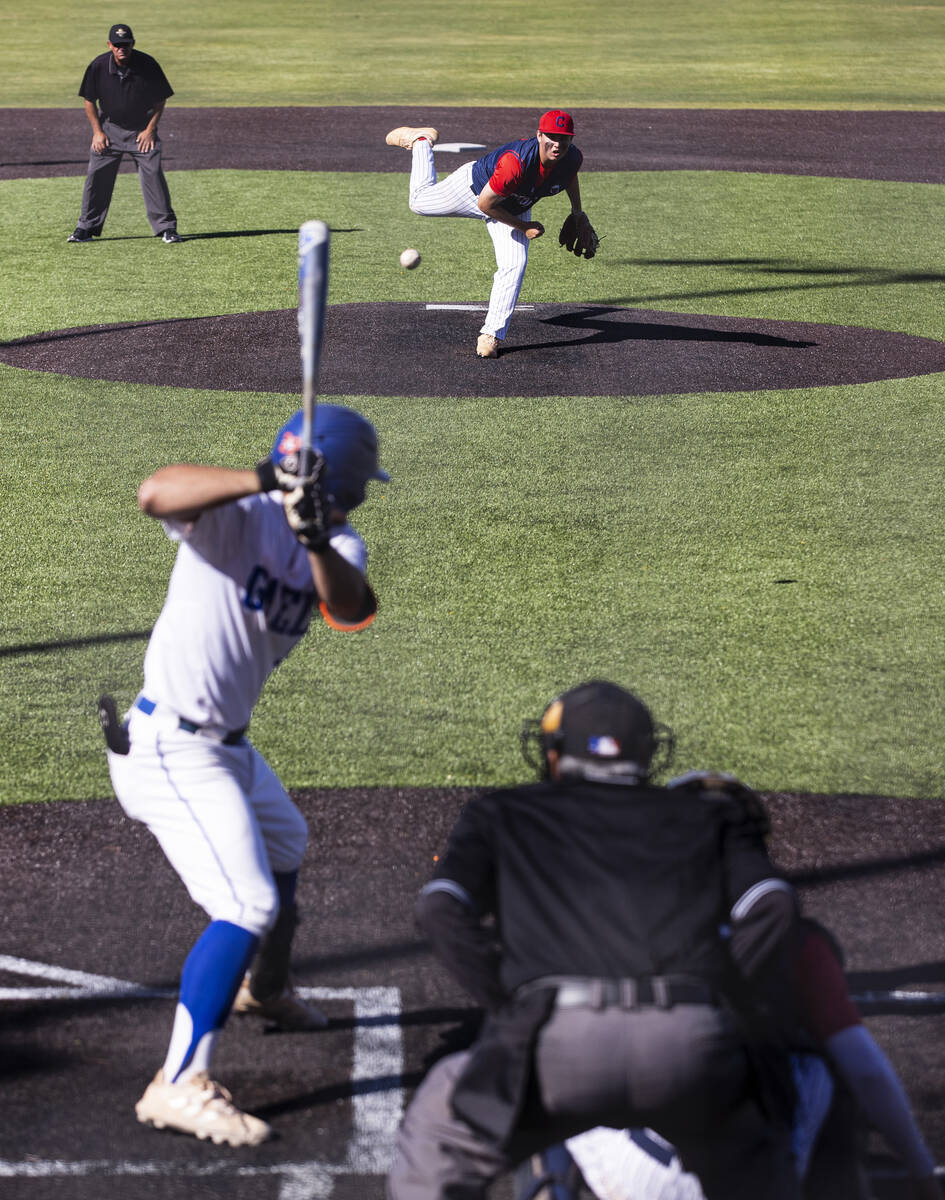 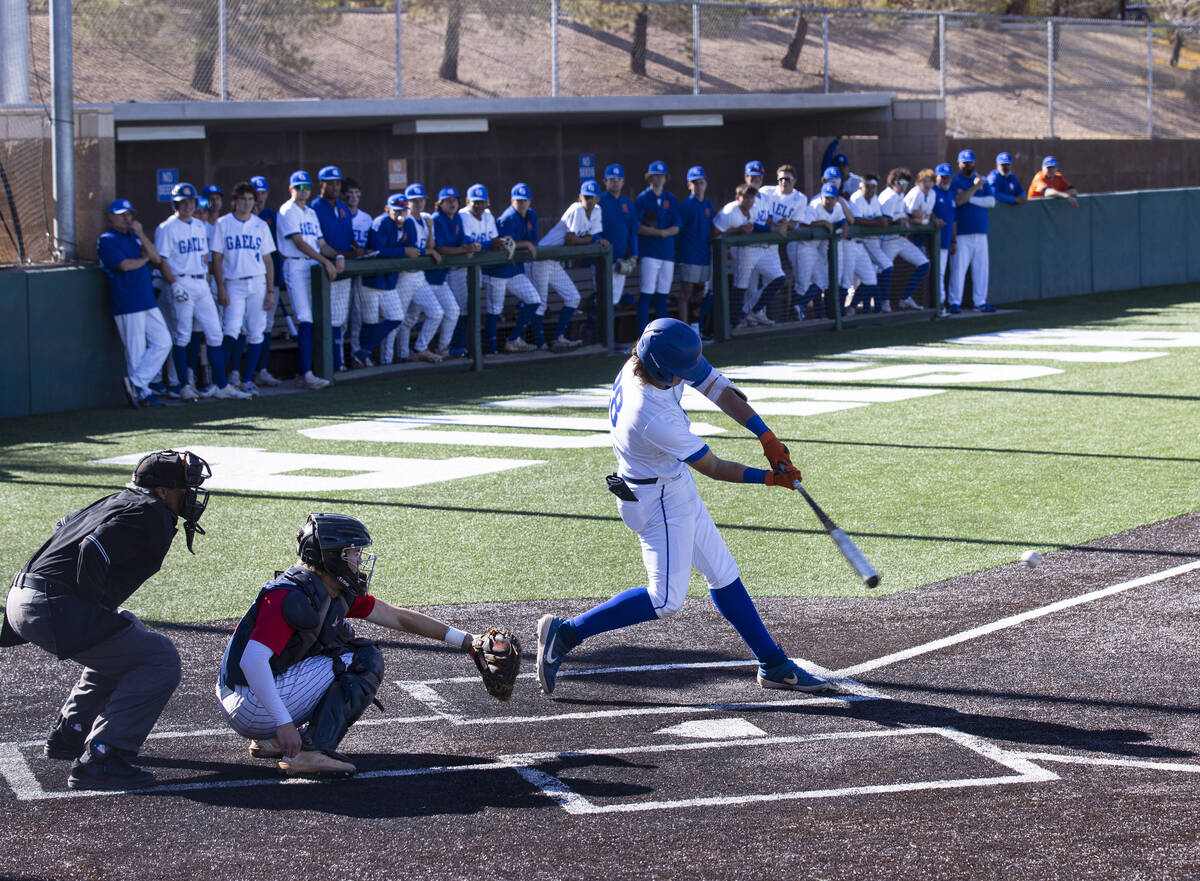 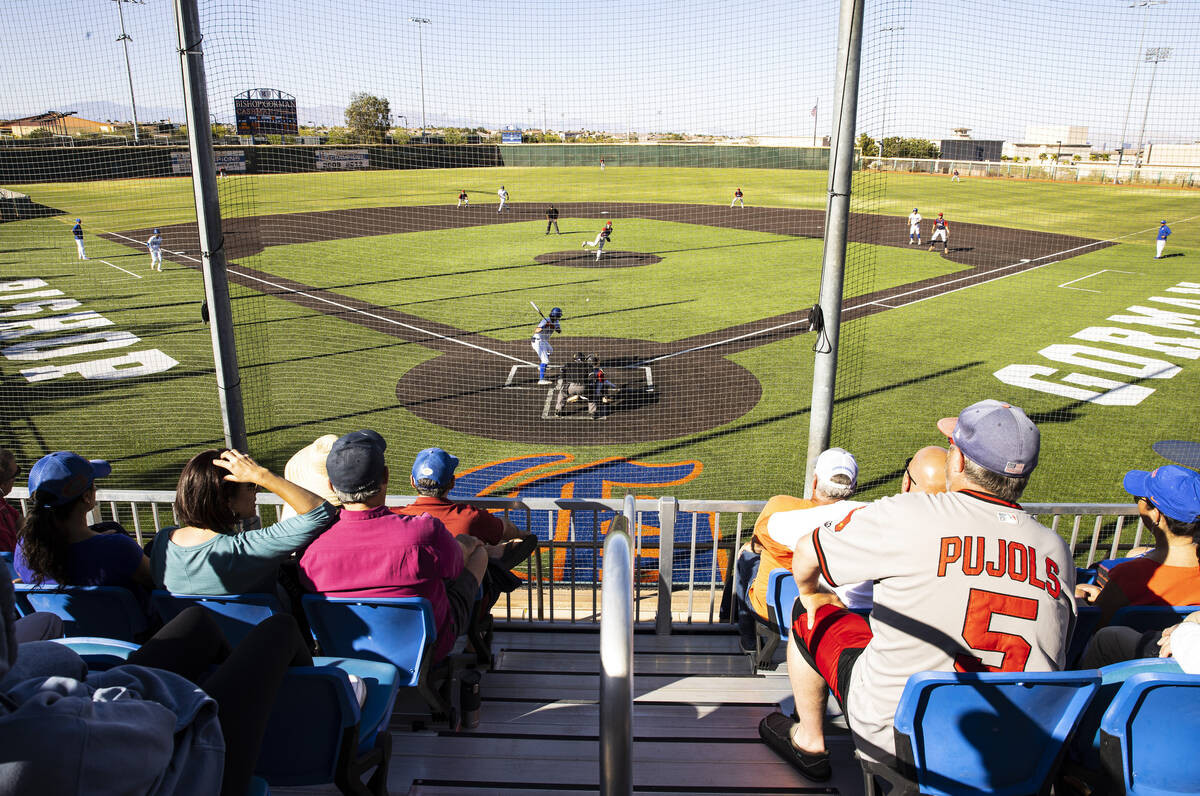 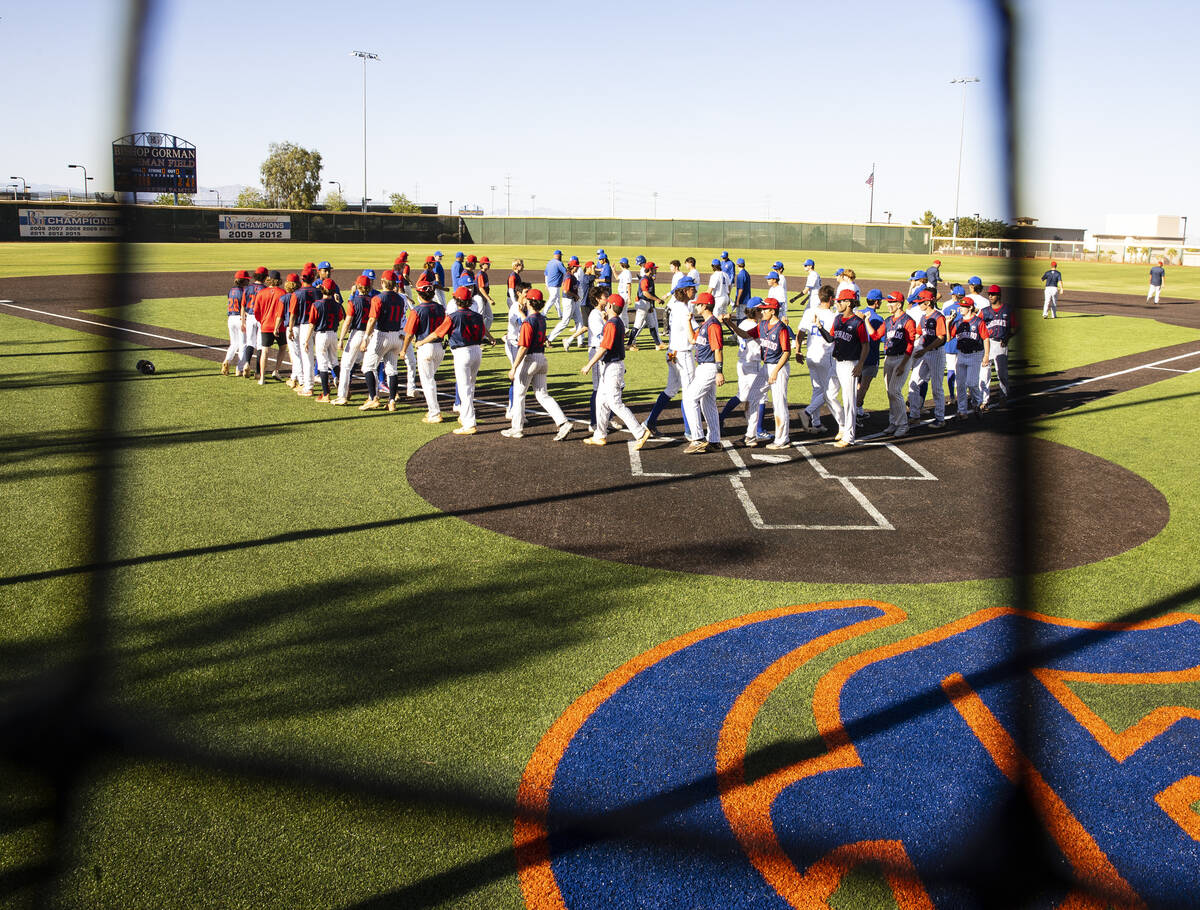 Of all the words written about baseball, these seven once spoken by Babe Ruth probably best explain why dynasties on the diamond have been fewer and farther between in Southern Nevada than in other high school sports:

Bishop Gorman has won eight state championships and sent 10 alums to the major leagues. Heading into this week’s state tournament, it has compiled a 33-4 record and is ranked No. 8 in the nation by MaxPreps.

As Gaels coach Gino DiMaria said after a recent victory — and unlike in the marquee sports of football and basketball at his school — just making it to the state tournament is enough to call a baseball season a success, even at Gorman, where state titles are practically a birthright.

Gorman won seven in a row from 2006 to 2012 and added another under DiMaria in 2015. But to his point, that was the last time the Gaels went all the way — and they didn’t even reach the final four in the two years before the COVID-19 pandemic hit.

On Friday, the Gaels were beaten by rival Basic in two Class 5A Southern Region championship games and will enter the state tournament as the South’s second representative behind the surging Wolves.

“Las Vegas is a baseball town pure and simple,” Aviators president Don Logan said about the city’s reputation as it relates to the myriad high school programs that have raised the championship banner. “The proof is the number of kids playing in the big leagues, the minor leagues, how many college guys are out there.

“Palo (Verde) is good, Centennial’s been really good through the years, Desert Oasis, Basic is good. Gorman has had dominance. But baseball is so good in the other parts of town that other schools have caught up.”

Before there was parity or at least the appearance of it, there was Rodger Fairless, who coached at Eldorado, Valley and Green Valley, won 12 state championships, including six in succession, and developed Hall of Fame pitcher Greg Maddux, among other MLB stars in establishing the first local high school dynasty of the recent era.

“I don’t really think people appreciate what Rodger Fairless did,” said Baylor coach and former big league infielder Steve Rodriguez, who played for Fairless at Valley. “He not only built programs and dynasties, he also built men.”

Las Vegas’ mild year-round weather, combined with the city’s population boom and coaches who had to ratchet up in an attempt to compete with Fairless, ultimately spawned other successful programs, as Logan noted.

The nature of the game — baseball is not a contact sport, so a good pitcher (or two) is capable of neutralizing a heavy-hitting lineup — also has produced a more level playing field in springtime.

“It’s not like in football, where Gorman can be in a tight game with Liberty, and by the time the fourth quarter gets there, they wear them out and then it’s 35-7,” said Nick Garritano, who played at Chaparral and coached Green Valley to two state championships before building a junior college powerhouse at College of Southern Nevada.

Added Centennial’s Charlie Cerrone, one of four Nevada high school coaches to have amassed more than 500 wins: “In 2014 we beat Gorman three times in 10 days, and we didn’t have a single kid who could start on their team. But we had a pitcher (Cooper Powell) who was able to beat them.”

The coaches say the gap between the best teams and Gorman began to widen again during COVID. The pandemic not only scrubbed the last two state tournaments but also kept most high school teams from even getting on the field while Gorman and Faith Lutheran were able to continue playing.

Sam Thomas, who played for Fairless at Valley and coached two-time National League MVP Bryce Harper at Las Vegas High, took the Wildcats to the state final four in 2019. This season, his team finished 11-19.

“We had a team that wasn’t scared of anybody, but we are a shell of that now,” Thomas said. “High school baseball (in Southern Nevada) is still pretty good. But there’s been a slow decline that started 10 or 15 years ago, and we’re still in it.”

It was no coincidence that Thomas used that time frame.

It roughly coincides with the rise of club or travel baseball, which many local high school coaches believe is an even bigger threat to their livelihood than not playing during the pandemic.

It used to be that prep players spent their summers playing with their spring teammates on American Legion or Connie Mack squads largely run by their high school coaches.

But the proliferation of club ball, where players (or their parents) pay thousands of dollars in return for exposure that might help them earn college scholarships, has ceded much of the responsibility to furthering their careers to a group that operates outside of the once traditional infrastructure.

“The one thing everybody sees as a concern is how much coaching is being done, as opposed to just putting in a lineup and letting (kids) play,” said Rodriguez, who guided his alma mater, Pepperdine, to eight NCAA Tournament appearances in 12 seasons before moving to the powerhouse Big 12. “So when we get them, we’re having to coach a lot of things that typically were already taught.”

For many high school players, the focus has switched from winning games to compiling a resume.

“You get a lot of these tournaments now that are individual showcases where you pay a bundle of money because that’s where the colleges are at,” Garritano said. “You can’t knock the parents, because they’re looking at what’s next.

“But that’s where it has really changed. It’s not so much a team game; it’s more of an individual game.”

With NCAA schools limited to 11.7 scholarships that are divided among 27 players, the carrot sometimes isn’t worth the price tag of competing for it. Cerrone mentioned one of his former players who had been offered a partial athletic scholarship to Washington State.

“When his (test) scores came in, they were able to offer him so much more academic money,” Cerrone said. “That’s what these kids don’t understand. If they’re chasing a scholarship, they’re wasting money for what they can get.”

Thomas said travel ball coaches sell the dream of a college scholarship. But with those opportunities remaining stagnant and club ball, in many cases, now being played by those with marginal ability because their parents’ money spends just as well as a five-tool prospect’s, the dream is getting further from reality.

“It would be like me trying to go golfing at Shadow Creek,” Thomas said.

As Bishop Gorman’s former coach who now runs his own club baseball academy, Chris Sheff has seen both sides.

“Obviously, I run a business. But that’s never been the main purpose,” he said. “I’m a mentor now, and as I get older, that becomes more important. Kids need guidance.”

In 2004, Sheff coached Gorman to its first state baseball title in 52 years. Before that, he played on Pepperdine’s NCAA championship team (he and Rodriguez were roommates) and was a 10th-round draft pick of the Florida Marlins who had a 10-year minor league career.

Unlike some travel ball coaches, his baseball credentials are hardly impeachable.

He said his program was inspired by the one Mike Gomez established at Durango when Sheff was at Gorman. Durango played a 75-game summer schedule that Sheff copied and supplemented with a 50-game fall slate for his Gorman players when nobody in the valley was playing year-round.

“But I don’t want to diminish what other people did before me because there are some great baseball people in this town who have done some great things,” said Sheff, adding that instead of fighting one another for players, high school and club coaches should work together or at least find a way to peacefully coexist.

Jay Matos, director of the Las Vegas franchise in California Baseball Academy USA, a club ball organization that has helped send more than 800 players to college since being founded eight years ago, said local high school coaches lack the necessary resources to provide players such as Gorman outfield prospect Justin Crawford with the opportunities and instruction that well-sponsored club ball groups can. But they also control a vital resource — the diamonds on which they practice and play.

“Because they lack the budget, they resort to Connie Mack and Legion, which used to be strong leagues but are not strong leagues anymore because of travel ball’s (growth),” Matos said.

High school coaches who coach summer teams also must ask players to pay, Matos said, because the stipends and support they receive from the Clark County School District are not enough to sustain a summer schedule.

Matos said the CBA charges $175 per month — a cost that could be lower if club teams had access to the local high school diamonds. In his perfect world, the prep coaches would have players for three months, then turn them over to club programs for the other nine.

At minimum, his fellow club ball advocates say, a prep baseball offseason in which top high school players would be allowed to join travel teams for selected events instead of being ostracized for it might be a compromise by which everybody wins and preserves Southern Nevada’s reputation as a high school baseball hotbed.

As Sheff said, “There’s a lot of ways for these kids to get to the next level. But when egos get in the way, that’s when it becomes difficult.”