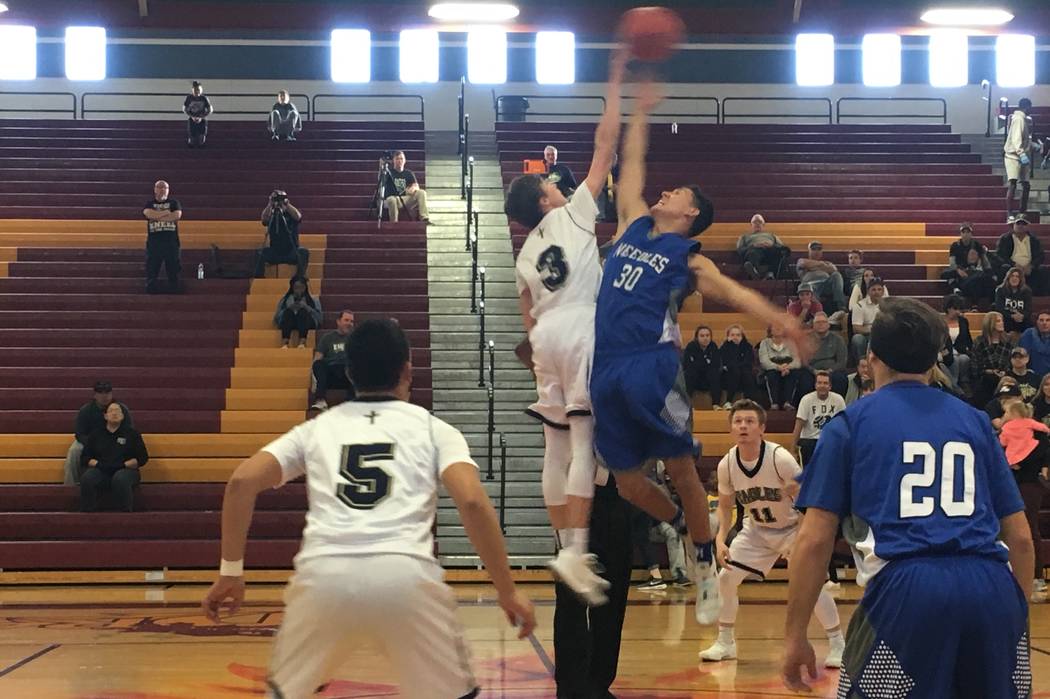 When Pat Woodburn was hired four years ago to coach Needles’ boys basketball, he said his goal was to get to the Class 2A state tournament.

The Mustangs overcame a sluggish start, and their defense stymied Lake Mead en route to a 50-39 overtime victory in the Class 2A Southern League semifinals at Del Sol on Friday evening.

The win sends Needles to the state tournament in Reno next week for the first time since 2011. The Mustangs will play Democracy Prep in the league title game at 2 p.m. Saturday at Del Sol.

“Our dream was to go to the state championship in Reno, Nevada, and we’re going there,” Woodburn said. “For us, it’s overwhelming.”

Needles (20-8) trailed 17-11 after the first quarter, but chipped away after that. The Mustangs’ deficit was two points after two quarters, one point after three, and they took a lead in the fourth quarter before forcing overtime.

The Eagles beat Needles twice in the regular season, by a total of four points.

“How fitting is that?” Woodburn said. “Then we pulled away.”

Needles’ defense found its groove in the second half, holding Lake Mead (13-12) to four field goals from the third quarter onward, and 2-for-14 from beyond the arc.

“I thought our defense really carried the day,” Woodburn said. “I thought we really struggled offensively, but they’re a good defensive team.”

Overtime belong to Needles. The Mustangs drained the first three buckets of the extra session, and scored more in the extra period than in any other quarter.

Donte Bristol had 13 points for the Eagles, and Kai Madela scored 12.

Democracy Prep 100, Mountain View 39 — At Del Sol, three players scored at least 26 points for the Blue Knights as they blew by the Saints in the other semifinal.

Akeemis Williams led all scorers with 29 points for Democracy Prep (26-3), and hit nine 3-pointers. As a team, the Blue Knights sunk 19 3-pointers.

Tyrell Brooks and Terrence Brooks each had 14 points to lead the Saints (14-14). Terrence had eight rebounds, and Tyrell had six. No other Mountain View player had more than three points.