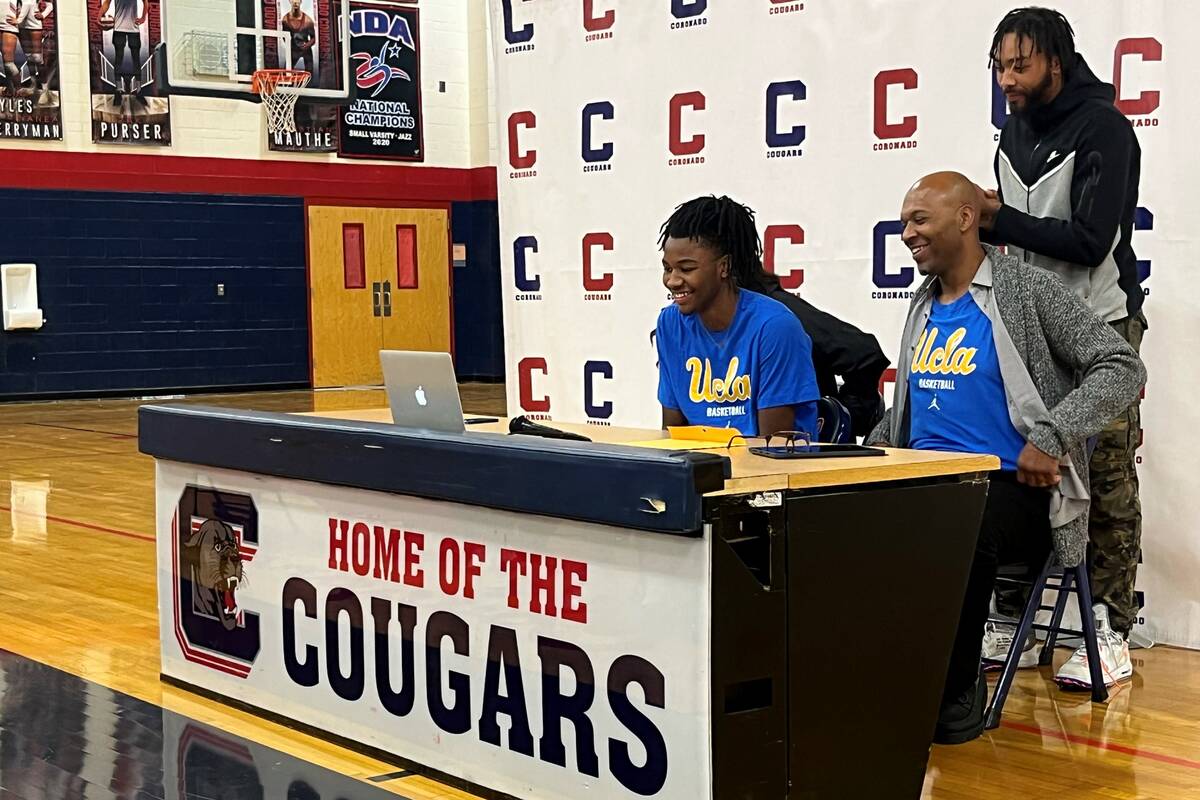 Coronado guard Sebastian Mack smiles with his family by his side after announcing his commitment to play college basketball at UCLA next season on Wednesday at Coronado High School. (Alex Wright/Las Vegas Review-Journal)

Coronado senior guard Sebastian Mack wasn’t going to rush his decision to commit to a college.

The four-star prospect and top-ranked Nevada high school basketball player in the class of 2023 by 247Sports had plenty of interest from some prominent programs.

With just over a week before the start of his senior season, Mack came to a decision. The 6-foot-4-inch guard signed his national letter of intent to play for UCLA and coach Mick Cronin on Wednesday.

“I’m excited,” Mack said. “I know I made the right decision. I feel like being with Coach Cronin and UCLA, it’s going to help me become a better player, but also as a leader.”

Along with UCLA, Mack had Florida State and Oklahoma in his final three. Other notable offers came from UNLV, Washington State and Texas A&M.

Mack described the process as a “roller coaster,” but said he focused his decision on which coach he felt was going to get the best out of him.

He said he believes he found that with Cronin. Coronado coach Jeff Kaufman agrees.

“Sebastian fits right in,” Kaufman said. “He is a Mick Cronin kid. I was really excited. UCLA is the right fit.”

Mack is a highly touted scorer, but he said he is looking to fine-tune other aspects of his game. He pointed to Bruins guard Tyger Campbell as an example of a player Cronin has worked with to be a better all-around player.

“As a pro, you’re going to need those abilities,” Mack said. “And I feel like Cronin can help me develop more of that and tune up a few things for my game.”

Before he puts on a UCLA jersey, Mack will play his senior year with Coronado after transferring from Durango. He said he’s looking forward to competing for a state title with the Cougars.

In his short time with Coronado, Kaufman said he has been impressed with the leadership Mack has shown.

“When one of your best players is one of your hardest workers, you’re lucky,” Kaufman said.