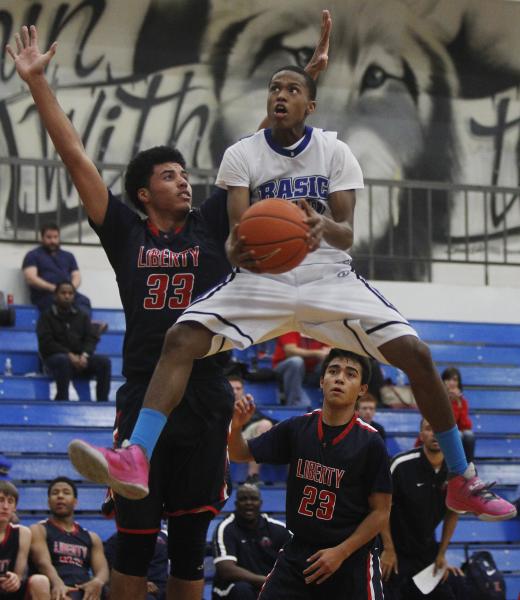 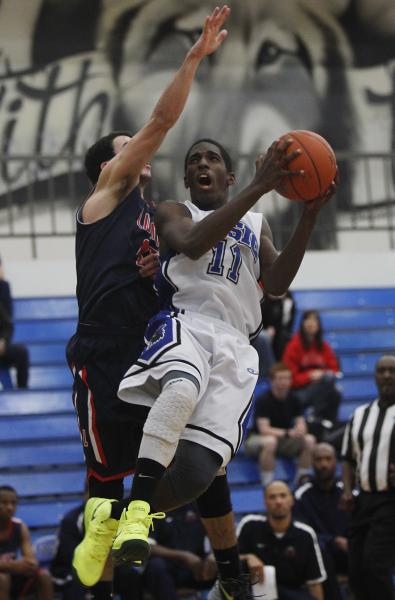 Basic’s Josh Villaros (11) goes up for a shot against Liberty’s Ryan Taggert during Thursday’s game. 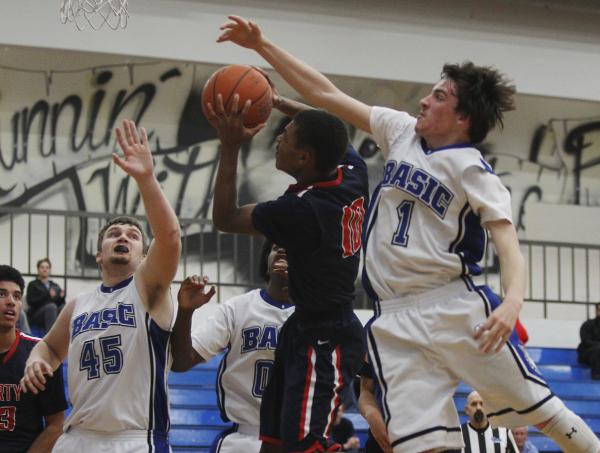 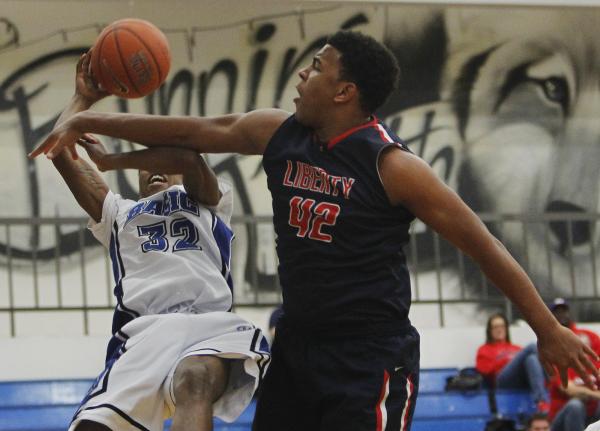 Basic’s Robert Sutton (32) is fouled by Liberty’s Noah Jefferson (42) during the first quarter of Thursday’s game.

The fourth quarter was a different story.

The host Wolves made five 3s in the final eight minutes and pulled away for a 65-54 victory over Liberty.

“They were giving us good looks from 3 all night and they weren’t falling,” Basic coach Leonard Taylor said. “But when we needed it most down the stretch, we knocked them down.”

Jared Meacham finished with 18 points and hit four of Basic’s seven 3-pointers. Josh Villaros chipped in with 11 points and three steals, and Shelldan Slayton had 12 rebounds as the Wolves (9-13, 3-3 Southeast League) remained tied for third place and all but eliminated Liberty (6-14, 1-5) from postseason contention with four games to play.

“This was not just a must-win for us to make the playoffs. We’re still fighting for the (No.) 2 seed,” Taylor said. “We’re in control of our own destiny as far as that goes. We’ve got all our guys now, and they’re ready to rock ‘n’ roll.”

The Patriots led 44-43 early in the fourth quarter before Basic got hot from outside and went on an 18-6 run in the next 5 minutes, 50 seconds. Meacham, who also had four rebounds and two steals, hit a 3-pointer from well beyond NBA range to put the Wolves ahead 49-44. He drained another 3 — after a quick behind-the-back dribble — to give Basic a 59-50 lead with 2:30 remaining.

The Wolves were 5-for-7 from 3-point range in the fourth quarter and made seven of 13 overall.

“That was a momentum changer,” Taylor said of Meacham’s long 3-pointer. “Jared Meacham is one of the premier shooters in town. He’s got the green light, and he knows that. Anything on this side of halfcourt is in his range.”

The Patriots trailed by 13 points in the first half, but closed the second quarter on an 11-2 run and scored seven of the first eight points to open the third. Graves capped the rally with a layup and then made both free throws after an intentional foul to give the Patriots their first lead at 34-32.

Graves’ basket off a nice feed from Jayven Hines-Stockton put Liberty ahead 42-40 heading into the fourth quarter before Basic rallied.

“We tried to get a lot of guys in due to the lead we had (in the first half),” Taylor said. “Their starters ate at our bench and got back in the game. But everyone on our team woke up in the fourth quarter.”