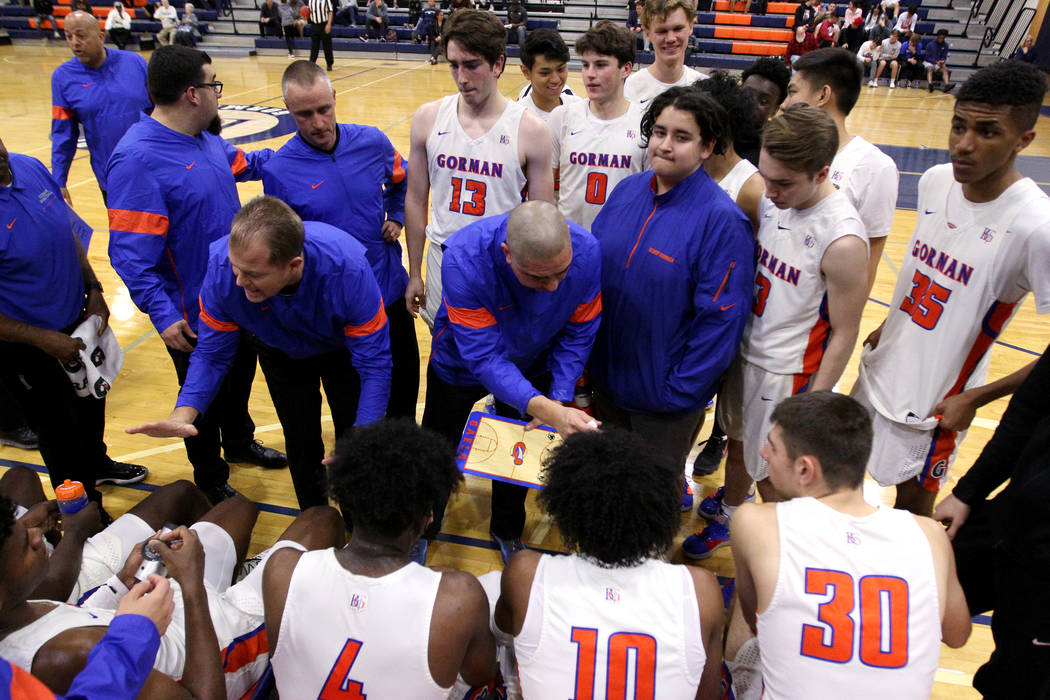 Bishop Gorman coaches talk to their players before the start of the fourt quarter of their basketball game against Durango at Bishop Gorman High School in Las Vegas Monday, Jan. 27, 2020. (K.M. Cannon/Las Vegas Review-Journal) @KMCannonPhoto

There’s no dispute going into the Class 4A high school basketball playoffs which teams are the favorites.

After all, the Bishop Gorman boys have won a state-record eight straight state championships, while the Centennial girls are attempting to stand alone in the girls record books with their sixth in a row.

The postseason began Monday with first-round games, but the second round Tuesday and Wednesday is when most teams will get rolling.

The regional championship games will all be Thursday, Feb. 20. Desert Oasis (Desert Region) and Desert Pines (Mountain Region) are the host sites.

Let’s take a look at each region’s bracket and how they shape up.

Gorman cruised through the Southwest undefeated, although it had a couple close calls, most notably an 80-77 overtime win over Durango on Jan. 7. Coronado dropped its last game, a 71-66 decision in an intense road showdown against Liberty, but still claimed the No. 1 seed.

Outside of Gorman, not many teams enter the playoffs hotter than the Diamondbacks. They have won six of their last eight. Their losses came against Gorman, which scored 35 fourth-quarter points to outlast them 73-66, and Silverado, which handed them a 60-58 road defeat.

The favorites: Desert Oasis (No. 1 Southwest), Spring Valley (No. 2 Southwest)

The Southwest League race was a battle among Desert Oasis, Spring Valley and Gorman, with the Diamondbacks coming out on top. Spring Valley was the only team to hand Desert Oasis a league loss and has a balanced team offensively. Liberty won the Southeast but falls short of favorite status largely because of a 63-35 neutral-site loss to Desert Oasis on Jan. 25.

The young Gaels have come a long way in a short time. Their results include a 53-52 overtime win over Spring Valley on Jan. 21.

“Now we know what we have to do,” Gorman coach Kevin Nixon said. “We beat each other up pretty good throughout the year (in the Southwest League), and we’re all better for it.”

Desert Pines didn’t drop a league game on the floor, but it forfeited two games for use of an ineligible player. Arbor View shared the title with Palo Verde, and it has as much individual talent as any team in the region.

The Crusaders aren’t physically imposing, but they have given the top teams in their league all they can handle.

“We like the way our guys are playing, and they play really well together,” Faith Lutheran coach Bret Walter said. “It’s going to be a really competitive tournament.”

Both of the No. 1 seeds ran through their leagues undefeated, and neither had to sweat much in any game to get that done.

Legacy was the only team that played Canyon Springs close, falling by a combined 12 points in their two meetings.

The regional championship games will all be Thursday, Feb. 20. Desert Oasis (Desert Region) and Desert Pines (Mountain Region) are the host sites.