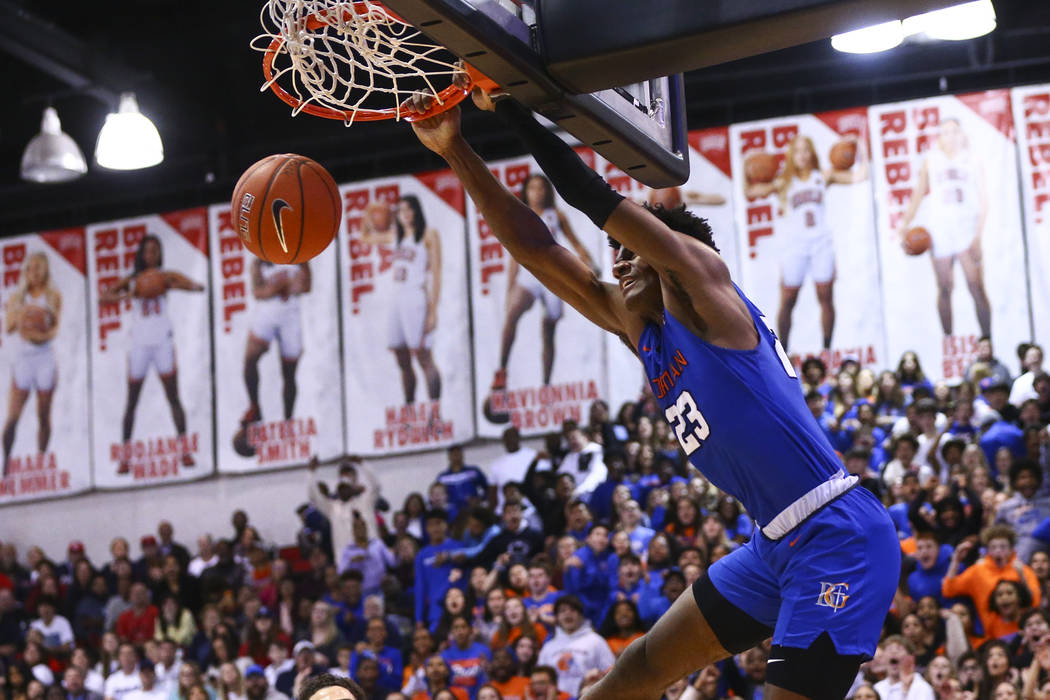 Bishop Gorman's Mwani Wilkinson (23) dunks off an alley-oop during the second half of a basketball game against Coronado at the Cox Pavilion in Las Vegas on Friday, Jan. 24, 2020. (Chase Stevens/Las Vegas Review-Journal) @csstevensphoto 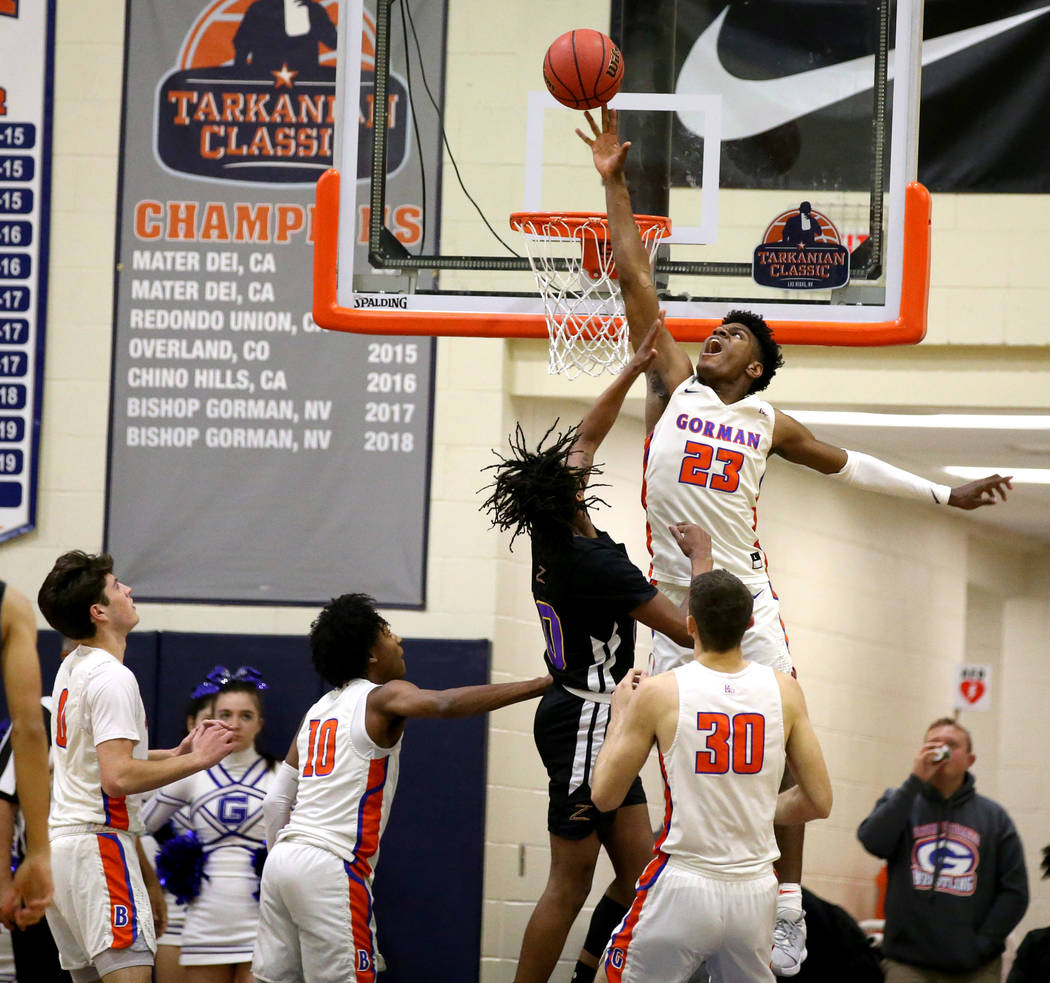 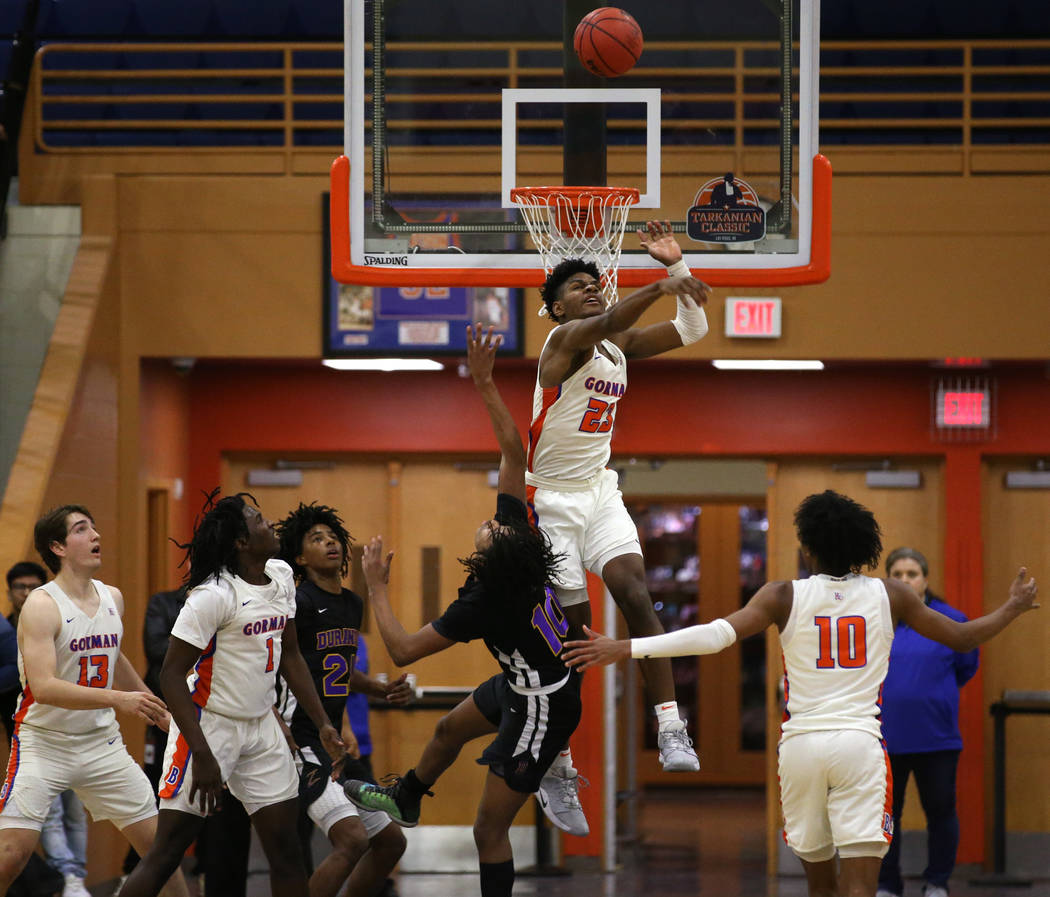 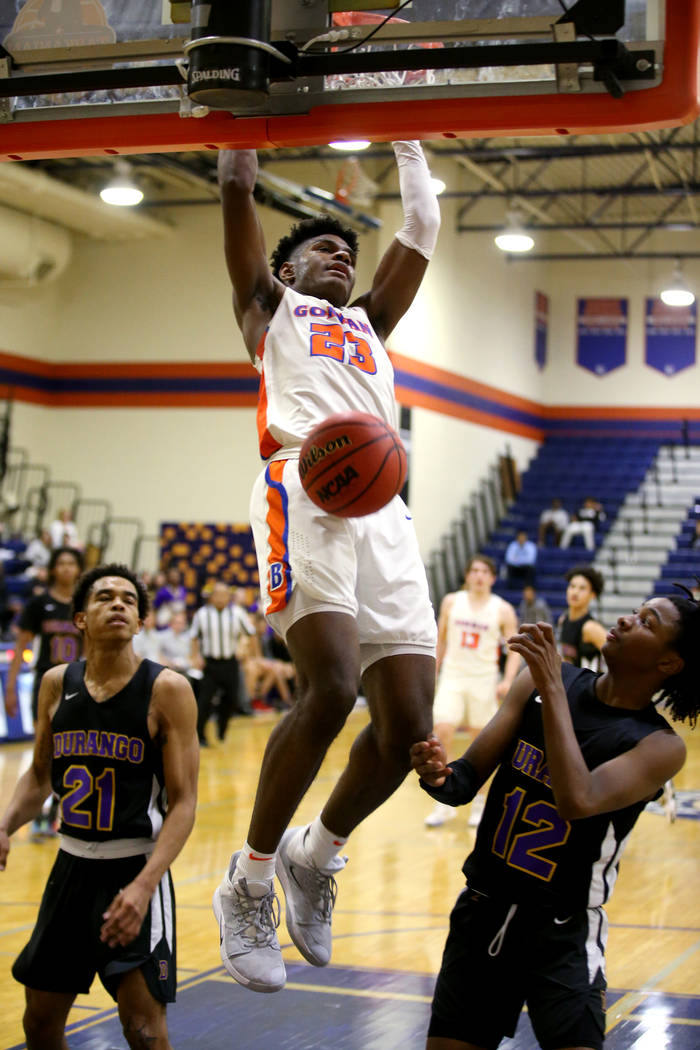 There has been no doubt about several Bishop Gorman players going on to play major college basketball over the years.

Some of them were being recruited as freshmen, and the only question is where they would go.

It wasn’t that simple for Mwani Wilkinson. The Gaels’ 6-foot-6-inch senior swingman’s athleticism always has been undeniable. But as his basketball skills began to catch up with his natural ability in the past year, schools came calling.

Wilkinson, who has moved up to No. 80 in the nation in the rivals.com rankings, said he was torn between a few schools but finally committed to Louisiana State on Saturday. He’s averaging 19 points on 65 percent shooting, 10 rebounds and 3.5 blocks.

“I got that offer in June, so it was in the middle of (the recruiting process),” Wilkinson said. “I thought about it, and one day I knew that’s where I wanted to go. I knew I couldn’t go wrong going there.”

It could be a perfect fit. Wilkinson’s family is from Baton Rouge, Louisiana, so he’ll have plenty of support.

Also, LSU will lose seniors Skylar Mays and Marlon Taylor, and sophomore forward Emmitt Williams could leave for the NBA. That could allow Wilkinson a chance to get playing time early, something he didn’t get at Gorman.

“He’s only been heavily recruited since last summer, so it’s a neat thing,” Gorman coach Grant Rice said. “It’s always been our philosophy at Gorman that sometimes it takes a little longer to get on the court here, but it pays off in the end.”

Wilkinson’s day begins with workouts at 6 a.m., and he stays after practice to work with assistant coach Jim Jones. He has improved his jump shot, one-dribble pullup and midrange game, Rice said.

Wilkinson said he was happy to have the decision behind him, especially with the Gaels preparing for the postseason and their bid to win a ninth straight state championship.

“It’s a really big deal, especially for me and my senior teammates,” he said. “We don’t want to be the ones to mess up the streak.”

Valley’s Christian Franklin has been named the Gatorade Nevada Boys Cross Country Runner of the Year.

The senior won his second consecutive Class 3A state championship in the fall. He also won the Southern Region title, the Larry Burgess Las Vegas Invitational, the Falcon Invitational and the Lake Mead Invitational.

Franklin is the first Valley runner to win the award.