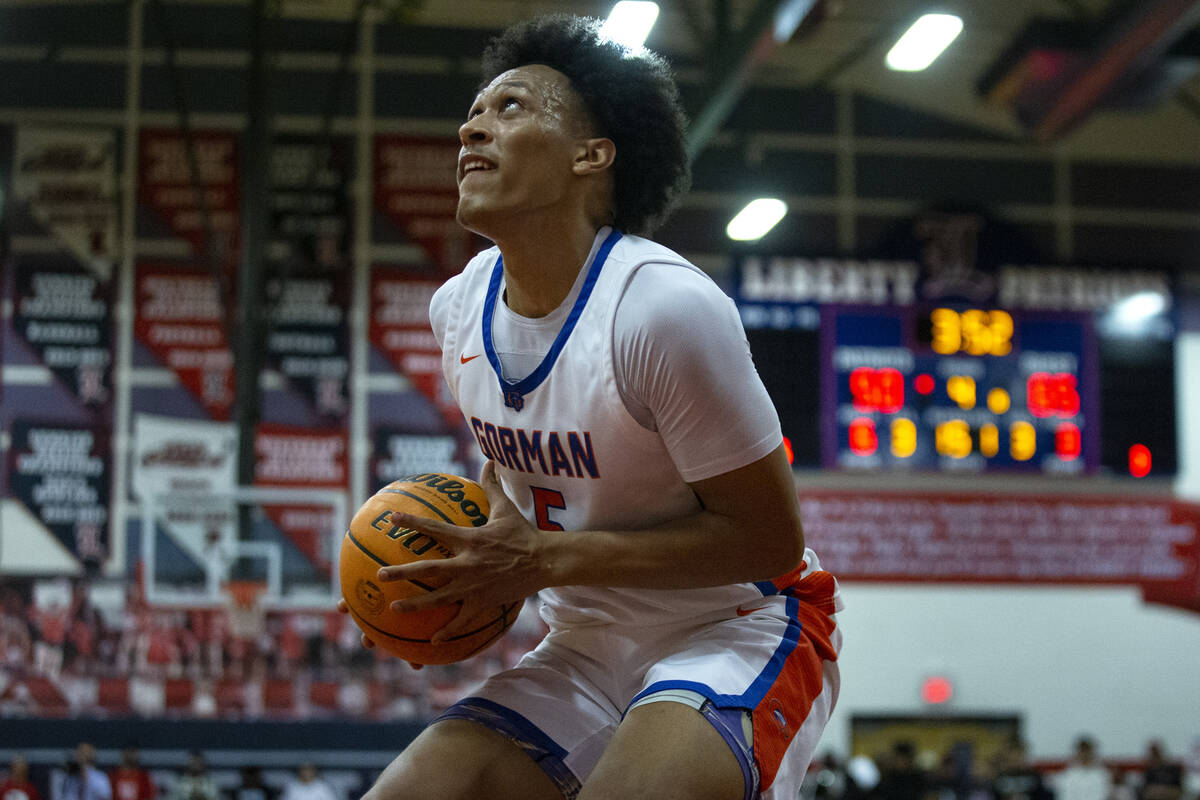 Bishop Gorman’s Darrion Williams (5) dips before shooting a layup against Liberty during the second half of a boys high school basketball game at Liberty High School on Thursday, Jan. 27, 2022, in Henderson. The game is a rematch of a double-overtime game from December 2021. (Ellen Schmidt/Las Vegas Review-Journal) @ellenschmidttt

Bishop Gorman and Coronado both like to play at a fast pace, and both have the horses to do it.

Gorman just has a few more of them.

The top-seeded Gaels went on a 13-2 run in the second quarter, and their pace and depth were too much for No. 4 Coronado to handle in a 79-55 home win in the Class 5A Southern Region semifinals Wednesday night.

“We knew Coronado was going to come out ready to go, and we wanted to get through that first quarter,” Gorman coach Grant Rice said. “I think our depth and some of our guys had a really good second quarter, and we extended the lead.”

The win guarantees Gorman a spot in next week’s 5A state tournament in Reno. The Gaels will host No. 2 Liberty, a 73-68 winner over No. 3 Durango, for the 5A Southern Region title at 6:30 p.m. Friday.

Darrion Williams scored 18 points to lead the four Gaels in double figures. Gorman (28-0) made nine 3-pointers to none for Coronado.

Jase Richardson had 15 points for the Gaels, and John Mobley and Chris Nwuli added 11 apiece. Richard Isaacs led the Cougars (17-10) with 19 points, but Gorman made him work on both ends of the floor and he fouled out in the fourth quarter. Josiah Cunningham scored 10 of his 17 points in the fourth quarter for Coronado.

“We know they have a really talented team, but obviously, we wanted to focus on (Isaacs),” Rice said. “We know how talented he is. If he gets 25 or 30, then they’re really, really good. We didn’t double team him, but we wanted to pressure him and make him work, but he was great. He kept them in it in the first half.”

The teams traded baskets for much of the first quarter, but Gorman got the better of that thanks to four 3-pointers from four different players. The last of those came at the buzzer from Richardson and gave the Gaels a 20-15 lead.

The regular season meeting between these teams was scrapped because of a five-day COVID shutdown in January. Both teams played with high energy in the first quarter before the Gaels started to wear down the Cougars.

“We were looking forward to (this game),” Williams said. “We didn’t play our best in our first-round game, so we wanted to come out here and make a statement.”

Gorman led 39-25 at halftime and extended that margin to as many as 29 at 64-35 after the third quarter before cruising home.

Gorman and Liberty have met twice this season, with the Gaels winning both. The first was a 97-95 double-overtime classic in the Tarkanian Classic final. Gorman controlled the early portion of an 80-71 win at Liberty on Jan. 27.

“They’re a great team, so it’s going to be challenge,” Williams said. “We’ve just got to come out ready to play. If we play our best, I think we can beat anybody.”