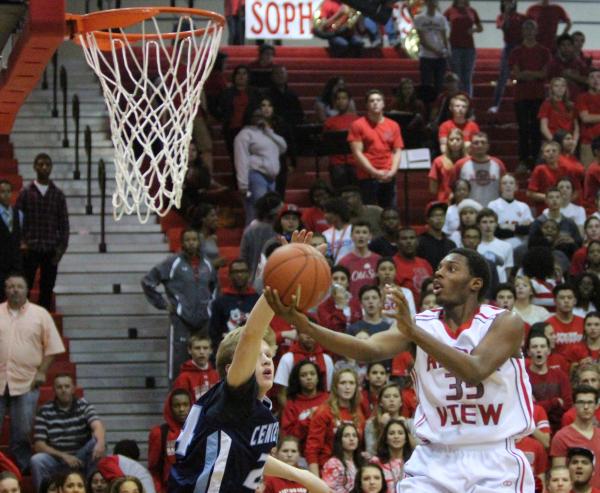 Arbor View’s Terrell Butler drives past Centennial’s Garrett Scheer on Friday. Butler scored 19 of his 23 points in the second half as the Aggies earned a 75-68 home win. 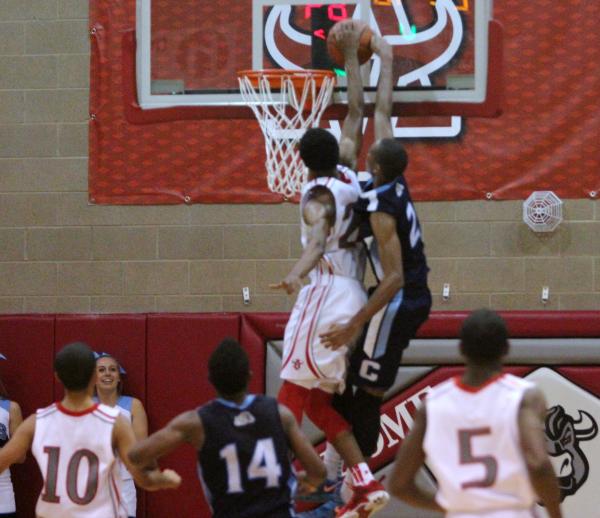 Arbor View’s Justin Burks, right, prevents a dunk by Centennial’s Troy Brown in the fourth quarter on Friday. Burks was whistled for a foul on the play. 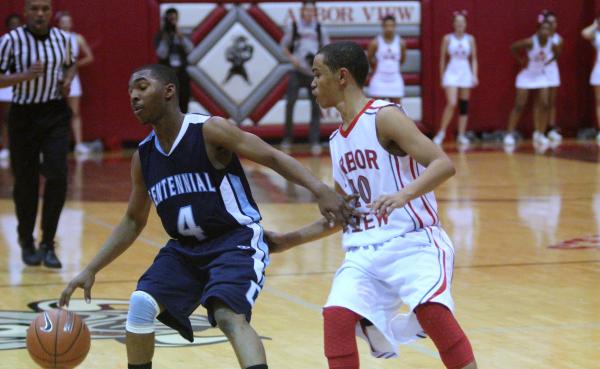 Terrell Butler and the rest of Arbor View’s boys basketball team had been waiting for a shot at Centennial since February.

And the Aggies made the most of their opportunity on Friday night.

Butler scored 19 of his 23 points in the second half to lead Arbor View to a 75-68 home win over the Bulldogs.

Centennial knocked the Aggies out of the Sunset Region playoffs last season.

“We’ve been thinking about this one since last year in the playoffs, and this is a great way to get it back against them,” Butler said. “I was happy that we pulled it out in front of our home fans in the way that we did, because we were down tonight the whole game. I’m just happy, proud of the team and proud of our effort.”

Butler scored the first five points of the fourth quarter to put second-ranked Arbor View (8-0) up 61-58, and the Aggies didn’t trail again.

“Tonight was Terrell’s chance to save the day, and he did,” Arbor View coach Kyle Hageness said. “He played extremely well in the second half on both ends of the floor.”

Butler had only four points on 2-for-8 shooting in the first half, and the Aggies trailed 38-34 at the break. But Butler was 8-for-11 from the floor in the second half to ignite the comeback.

“I was struggling in the first half,” Butler said. “I was forcing it, so I tried to let the game come to me in the second half. Just little, quick layups here and there, some free throws, and that got everybody going and got us back in the game.”

But the Bulldogs were just 2-for-10 from long range in the second half as Arbor View played more man-to-man defense.

“My guys’ effort on defense is what changed the course of the game, to limit the perimeter shots and try to keep guys from getting offensive rebounds,” Hageness said.

Isaiah Simmons was huge on the glass in the second half for the Aggies, grabbing eight of his team-high 10 rebounds.

“He’s the kind of kid that looks scary coming off the bus and he delivers in the uniform on the floor,” Hageness said of the 6-foot-5-inch, 215-pound Simmons. “If he wants to get the rebound, he’s going to. And he got some huge rebounds in the second half.”