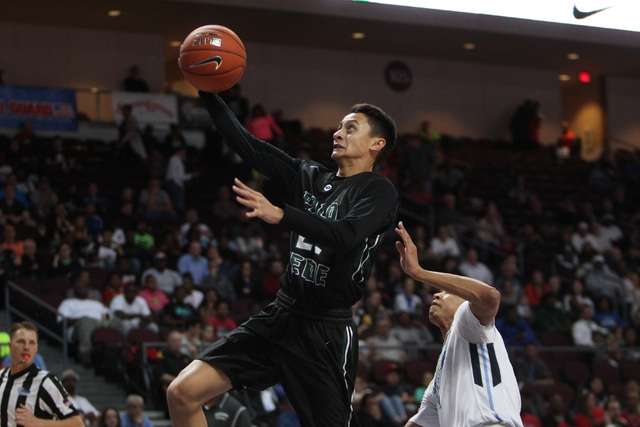 Palo Verde guard Taylor Miller drives to the basket past Canyon Springs guard Jordan Davis during their Division I state semifinal game Thursday, Feb. 26, 2015, at the Orleans Arena. Miller had 19 points to lead the Panthers to a 50-48 win. (Sam Morris/Las Vegas Review-Journal) 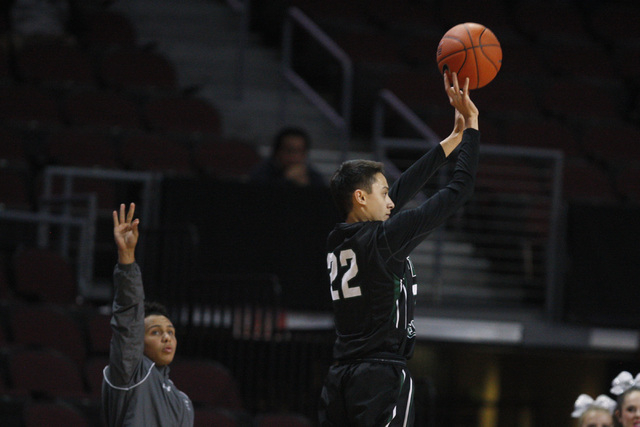 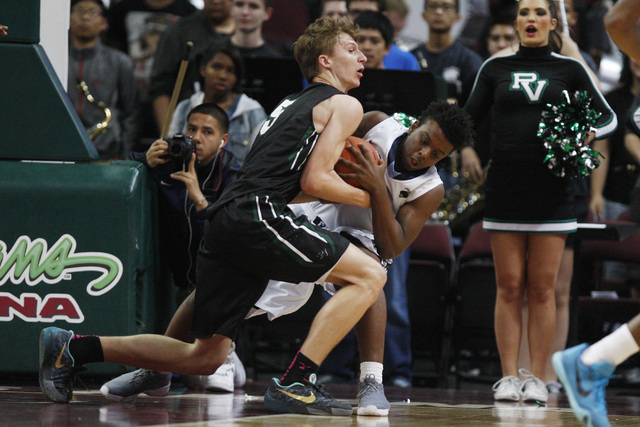 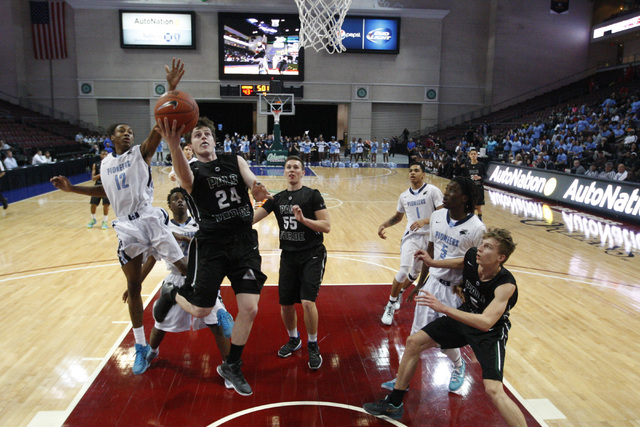 Palo Verde’s Ryan Vogelei drives to the basket against Canyon Springs during their Division I state semifinal game Thursday, Feb. 26, 2015, at the Orleans Arena. Vogelei had two points in the Panthers’ 50-48 win. (Sam Morris/Las Vegas Review-Journal) 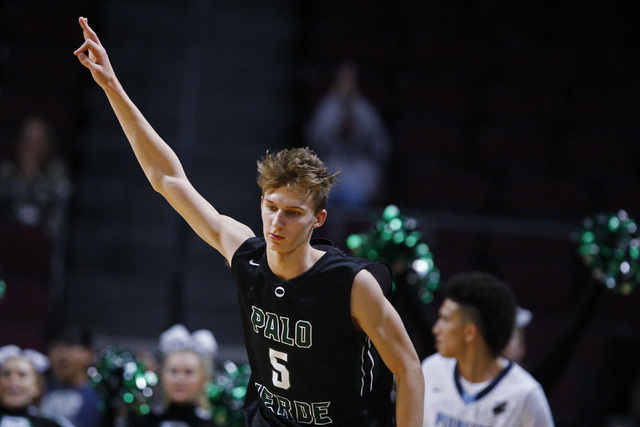 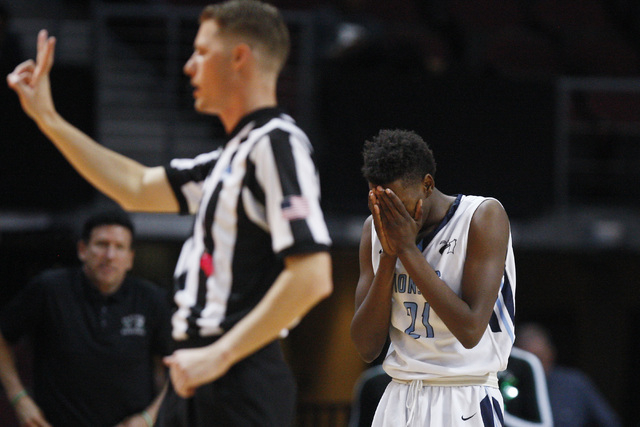 Canyon Springs guard D’Quan Crockett reacts after being called for his fifth foul against Palo Verde during their Division I state semifinal game Thursday, Feb. 26, 2015, at the Orleans Arena. Crockett had six points for the Pioneers, who lost 50-48. (Sam Morris/Las Vegas Review-Journal) 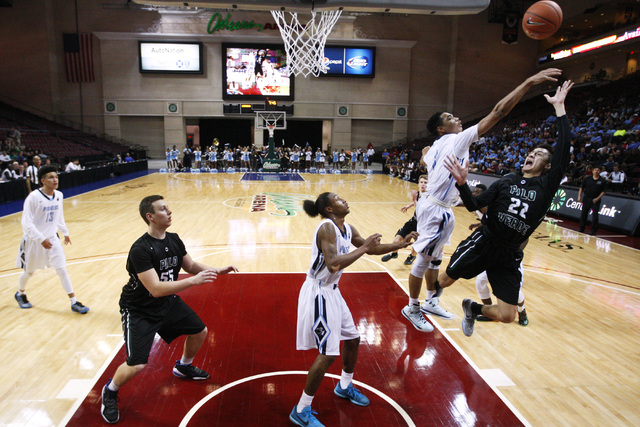 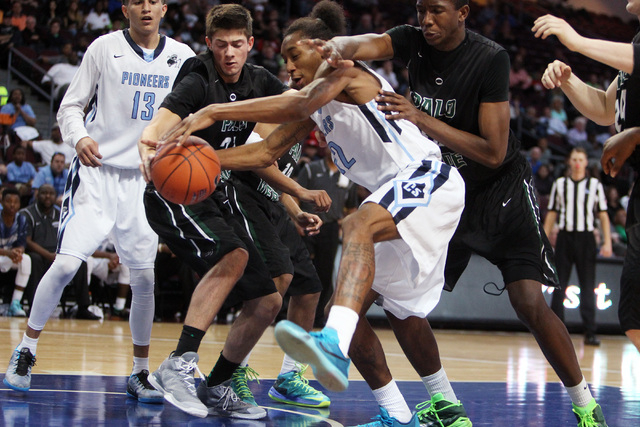 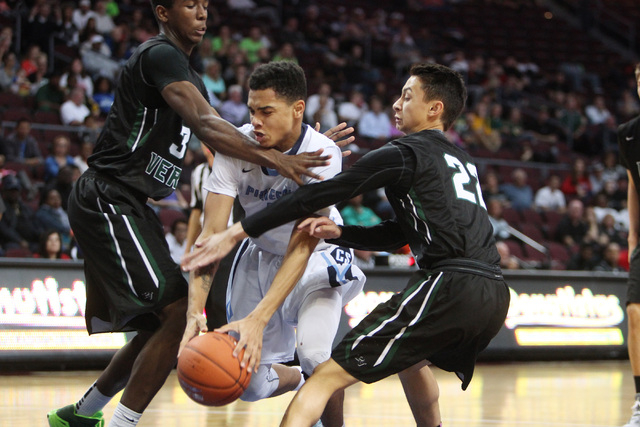 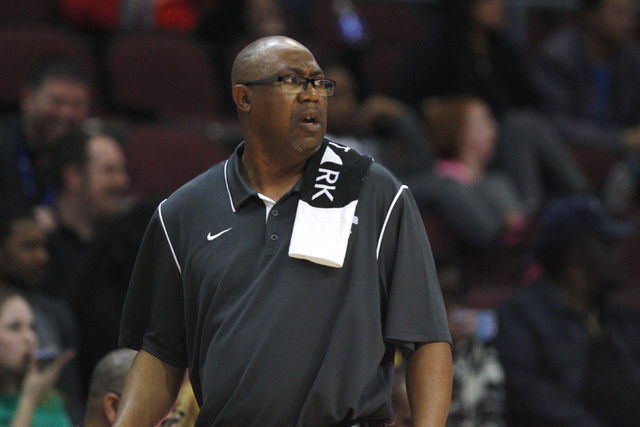 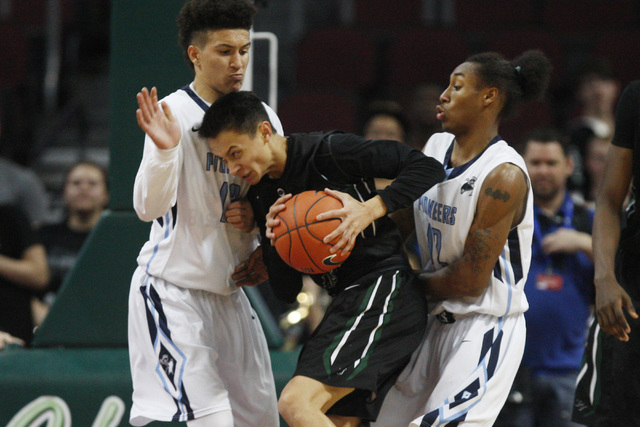 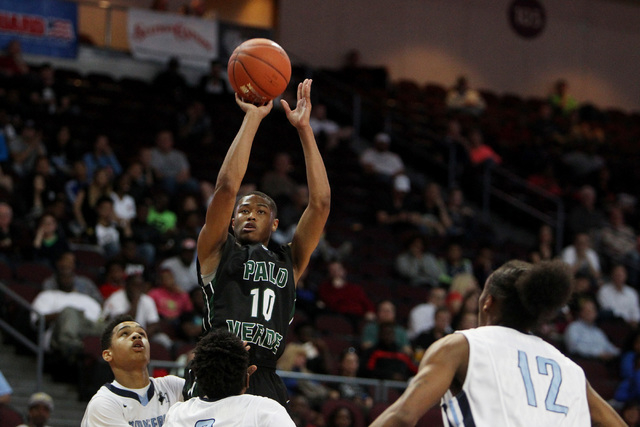 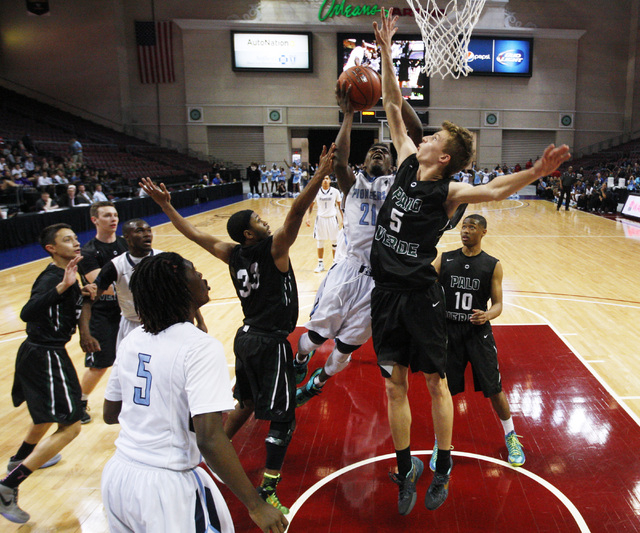 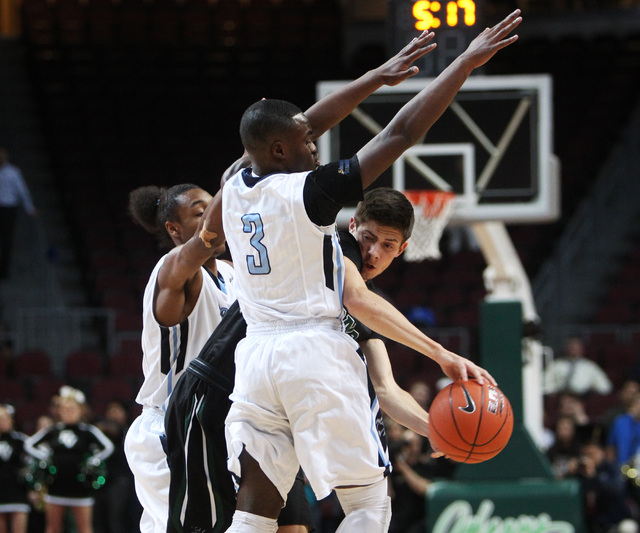 Some players look for someplace to hide with the game on the line. Palo Verde junior guard Taylor Miller looks for the ball.

Miller made the biggest shot of his high school career on Thursday, knocking down a pull-up jumper with 10 seconds to play to lift the Panthers to a 50-48 win over Canyon Springs in the Division I boys state semifinals at Orleans Arena.

The Panthers play Bishop Gorman in the Division I state final at 8:10 p.m. Friday at Orleans Arena.

Palo Verde (21-9) had the ball after a timeout with 22.7 seconds left. It ended up in the hands of reserve guard Ryan Vogelei, who drove toward the lane and dished to Miller in the right corner.

Miller took two dribbles and elevated for a 15-footer to give the Panthers the lead.

“I trust my teammtes to hit big shots, but when it comes down to it, I want to hit the shots,” Miller said. “I want for me to have a big part in (the result). When my teammates find me, I’m always ready.”

Miller said the play wasn’t designed to go to him, but he was indeed ready to take the big shot.

“We just wanted to spread the floor out,” Miller said. “We were looking for Ja (Morgan) and Grant (Dressler) to run a pick-and-roll. Ryan got the ball, drove and Ryan made a good kickout and I hit the shot.”

After Miller’s go-ahead shot, Canyon Springs (19-11) got the ball to Jordan Davis, who raced toward the basket. But the ball was slapped out of his hands as he drove, and Vogelei came up with it and was able to run out the clock.

“(I) should have left less time on the clock,” Miller joked. “We made a big stop. We knew Jordan was going to get the ball and attack. He’s their main guy. Ryan’s a tough defender. He stopped him, and we were just blessed to get the win.”

Canyon Springs led 48-45 after two free throws by Davis with 2:37 to play. After a steal, the Pioneers spread the floor and ran clock. They got the ball to an open Maurice Hunter inside, but his short shot missed, and Dressler rebounded.

Canyon Springs called timeout with 58.6 seconds to set up a play, but Davis was called for traveling with 49.9 seconds left, giving the ball back to the Panthers.

The Pioneers were in control early. They forced 11 first-half turnovers and turned them into 15 points to take a 28-21 lead at the break.

Canyon Springs led 12-3 before some hot outside shooting got Palo Verde back into the game. The Panthers were 4-for-6 on 3-pointers in the first quarter, including two by Miller, who finished with a game-high 19 points.

“That’s a big part of our offense is our outside shooting,” Miller said. “When we’re hitting like we were today, we’re tough to beat.”

“He kind of carried us, because he was the one that kept pumping us throughout the whole game and doing some hard work,” Sanchez said.

The Panthers turned the ball over only four times after halftime, and Sanchez said that was key to taking control of the game.

“The biggest thing was we needed to take care of the ball better,” Sanchez said. “They got us to turn the ball over in the first half. They got some easy fastbreak baskets. Whenever we were able to set up our defense, we held them pretty good. But a bad shot or a turnover and they were racing and getting layups on us.”

Morgan had 17 points, and Dressler added 10 points, 11 rebounds and three blocked shots for the Panthers, who lost twice to Gorman in the regular season and fell 82-46 to the Gaels in the Sunset Region final.