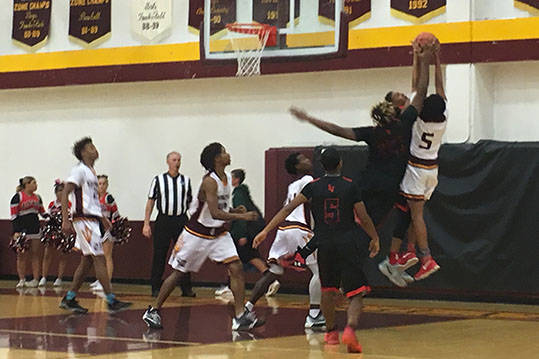 Las Vegas led by as many as 14 points in the second quarter, and watched the lead dwindle to three in the fourth. But Donovan Joyner and his 37 points helped stake Las Vegas a big enough lead that it could hold on and outlast host Eldorado for an 82-73 victory.

“We were undisciplined on defense, we just didn’t play like we’re coached to do,” Wilson said. “We thought he had chances to put the game away early and didn’t take advantage of it.

“It’s always good to get a win, on the road, in conference, on the first game, against a good team.”

The Wildcats (11-4, 1-0 Northeast League) looked poised to run away with the game in the first half, and Joyner scored 15 in the first quarter. They led 45-31 midway through the second quarter, and took a nine-point lead into halftime.

But the Sundevils (10-5, 0-1) did not quit. They trimmed the Wildcats’ lead to six points with four minutes to go, then three points with 100 seconds left after Jalen Malone scored a bucket, finished the three-point play, got a steal and fed Kemo Bell for a score.

That was Eldorado’s last bucket, though, and the Wildcats ended the game on a 10-4 run.

“We maintained, we kept calm and just did our thing,” Joyner said. “We stopped the dribble-drive and we stopped the 3-point ball.”

Joyner said he wasn’t happy despite his big night. He made his first six free throws of the game, then shot 4 of 12 from the foul line the rest of the way and missed six of his 10 fourth-quarter attempts.

“I didn’t play to my potential because missed too many free-throws and easy buckets,” he said.

But his early-game dominance was enough. He had 21 points at halftime and hauled in 12 rebounds. Teammate Jaylin Headen scored 14, and Zion Edwards had 15 boards to help the Wildcats claim their league opener.

Eldorado, playing without star junior Jonathan Thomas, got 17 points from Jordan Carter and 16 from Bell.