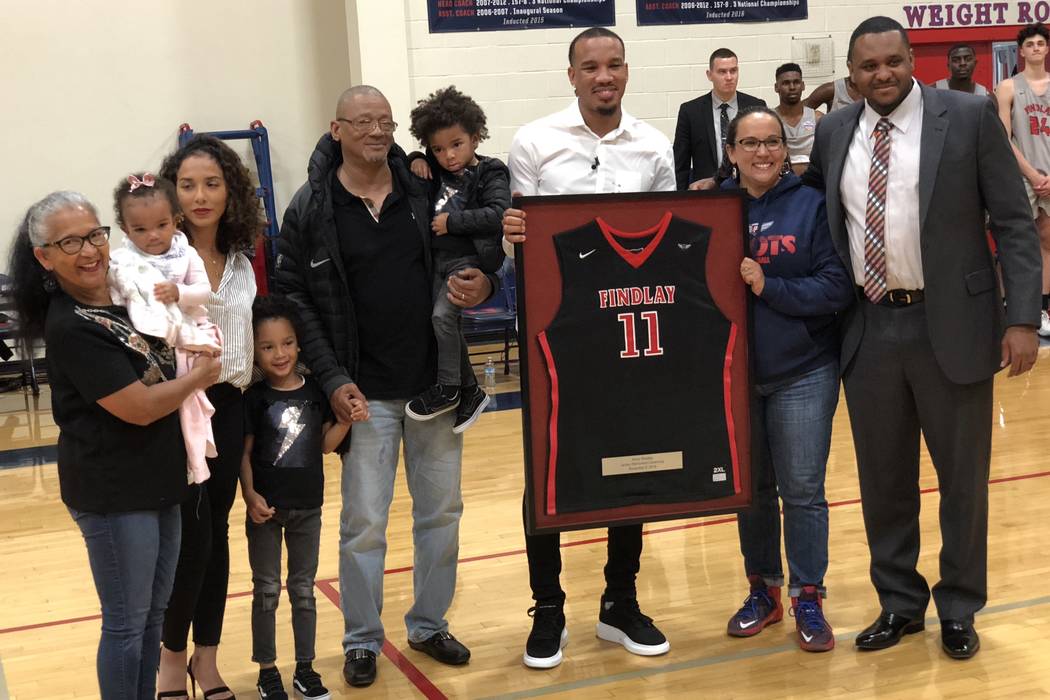 “He made this place what it was,” he said, matter-of-factly. “Findlay wouldn’t be what it was today if Avery Bradley didn’t show up.”

So Bradley showed up again Tuesday night to find that out first hand.

The Pilots honored the nine-year NBA veteran at halftime of their 111-65 victory over Planet Athlete Academy by retiring his No. 11 jersey before an ebullient crowd, family and friends. Bradley was presented with a framed replica of the uniform during a brief ceremony, and posed for pictures amid a standing ovation.

He also mingled with spectators and signed autographs for children, all but turning Findlay Prep’s blowout victory into an afterthought.

“He’s one of the first to do what he’s done here,” Haddix said. “We’re very happy that he got to come back. … It means a lot for us and I know it means a lot to him.”

Bradley, who grew up in Tacoma Washington, starred in his hometown at Bellarmine Prep before transferring to Findlay in 2008 — while the national powerhouse was still in its relative infancy. He guided the Pilots to an undefeated record in 2008-09, a national championship and earned McDonald’s All-America honors as the nation’s top shooting guard recruit.

He spent one year at Texas and was drafted by the Boston Celtics in the first round of the 2010 NBA Draft, having since grown into one of the league’s top perimeter defenders.

He met with the players before the game and shared some of his experiences.

“He’s just like the rest of those guys. He was one of them once,” Haddix said. “It showed them that everybody came here and they were kids at one point. He figured out to get it done.”

Bradley sat behind the scorer’s table during the first half and watched the Pilots rout Planet Athlete Academy. Senior guard and Texas Christian recruit PJ Fuller had 21 points and nine assists, and junior guard Blaise Beauchamp made eight 3-pointers en route to 26 points.

“He’s a player that came through here and was successful coming through here, making it to the NBA and becoming one of the better players,” Fuller said. “It was just good for all of us to see, to let us know that it could be us.”