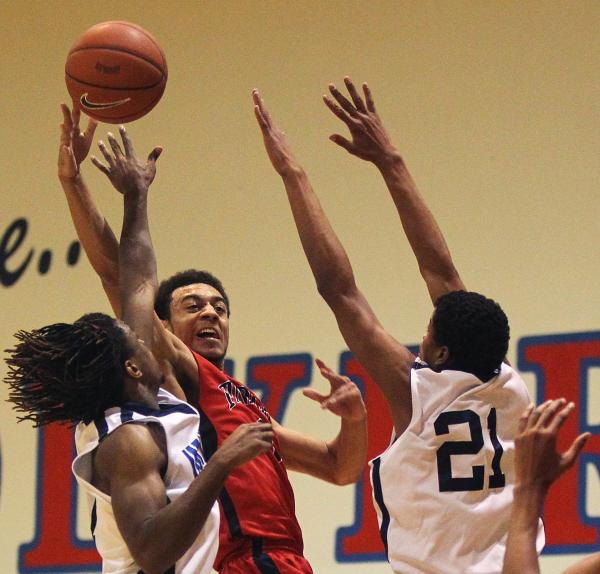 The blueprint for a prep basketball powerhouse was created in the middle of the night over several large pizzas.

Todd Simon and Michael Peck worked long hours together in the film room at UNLV from 2004 to 2006, and they spent plenty of time eating Domino’s and forming their vision for a high-profile program.

They never set out to shake up the basketball establishment.

“Our intention when we started out was to do this the right way, do right by every kid,” said Simon, a student manager on Lon Kruger’s staff for two seasons. “Our thoughts are a little different. But our beliefs were strong enough, and we were convicted enough to say we are going to do things our way.

“We knew if we were going to be unconventional, we could not be afraid of any repercussions.”

Seven years after its formation, Findlay Prep of the Henderson International School — the official name of Findlay Prep — has become one of the most recognizable brands in the increasingly high-stakes marketplace of high school basketball.

And its unique setup, which was once a national topic of debate, now has a string of imitators across the country hoping to duplicate the success of the trendsetting program.

“I think we came around and became successful at the right time,” said Simon, who just finished his first season as the Pilots’ head coach after six as an assistant. “A lot of it had to do with timing and also the sheer level of success we had. We were able to turn some heads.”

Unlike a traditional private school, Findlay Prep is not a member of the National Federation of State High School Associations and does not compete for Nevada Interscholastic Activities Association state titles.

Instead, the program bankrolled by automobile magnate and UNLV booster Cliff Findlay barnstorms the country playing a national schedule designed to prepare players for the rigors of college basketball.

The Pilots played a handful of games in 2006-07 under coach Scott Beeten before Peck was promoted to the head position the following season. The former Rebels video coordinator guided Findlay Prep to the title game of the national prep school championship with a roster that used fifth-year players and included UNLV recruit Brice Massamba.

At least two more Findlay Prep products — led by UNLV freshman Anthony Bennett — are expected to be selected in the first round of this year’s NBA Draft.

“The name recognition and brand equity has happened much quicker than I ever dreamed,” Findlay said. “I do a lot of traveling, and people will come up to me in Europe or if I’m in North Carolina fishing or in Idaho hunting if I’m wearing a Findlay Prep hat.

“Most people who are into basketball know Findlay Prep.”

The program’s players are the lone high school students enrolled at Henderson International, an arrangement that came under scrutiny in a 2009 Sports Illustrated article. Critics focused mostly on the players’ lavish living conditions in a $425,000, five-bedroom house provided by Findlay and their benefactor’s ties to UNLV.

But the Pilots’ rapid rise also has spawned numerous copycat programs seeking to capitalize on the exposure that comes from high-profile events such as the NHSI, which is hosted by ESPN.

Huntington Prep (W.Va.), featuring the nation’s top recruit in forward Andrew Wiggins, uses a similar model to Findlay Prep in which players attend a local Catholic school. Westwind Prep Academy (Ariz.), which lost to the Pilots three times this season, created a firestorm in its home state when it formed a national team in 2012.

Even Deion Sanders co-founded Prime Prep Academy, a charter school in Dallas. The Truth — only Sanders could come up with that nickname — reached the semifinals of the NHSI this month in their first season of existence.

“There’s a lot of places that are starting basketball programs and making up schools to go with them, which is the opposite of what we do,” said Steve Smith, the longtime coach at famed Oak Hill Academy (Va.). “We used to play four or five home games. Now we play 20. They all want to play us.”

Yet, Findlay Prep remains the standard. Including forward Gavin Schilling (Michigan State) and guard Dion Wade (Auburn), who both will sign their national letters of intent today, eight members of this year’s team that reached the NHSI semifinals will move on to the Division I level.

In fact, since the program’s inception, 100 percent of its graduates — 40 in all — have received Division I scholarships, and every one has been academically eligible.

The poster boy for the program’s success is Nigel Williams-Goss. A native of Oregon, Williams-Goss relocated to Las Vegas with his family after the eighth grade in search of better competition and more exposure.

This season, the Washington recruit became the first four-year player in Findlay Prep history and its seventh McDonald’s All-American.

“I definitely think it was worth it,” Williams-Goss said. “I think you’ll keep seeing prep schools getting the best talent in the country because they provide opportunities normal high schools just can’t.”

Simon, who took over the program in 2012 when the Portland Trail Blazers hired Peck to coach their Development League team, said his ultimate goal is for 5 percent of the NBA to hail from Findlay Prep.

For now, though, he takes pride in knowing he helped alter the prep hoops landscape and is confident Findlay Prep will leave a lasting mark.

“My hope is that this is something that is a flagship for programs to copy and copy the right way,” Simon said. “If we stand up and be an example for others and provide a good environment for teenagers who need it, that’s probably greater than our won-loss record.”