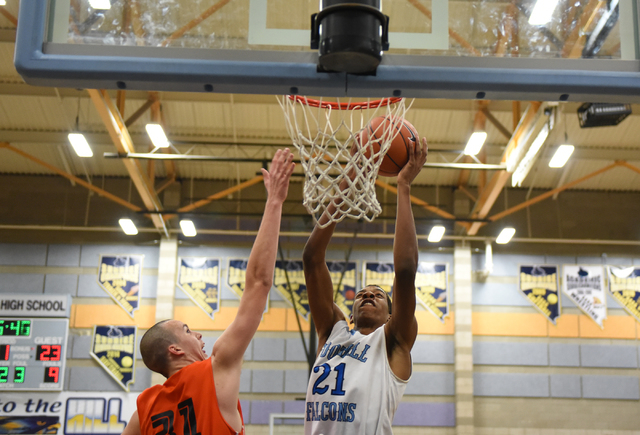 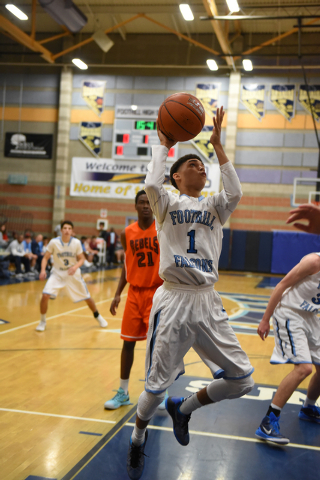 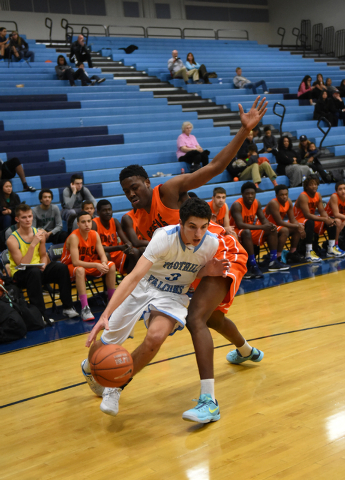 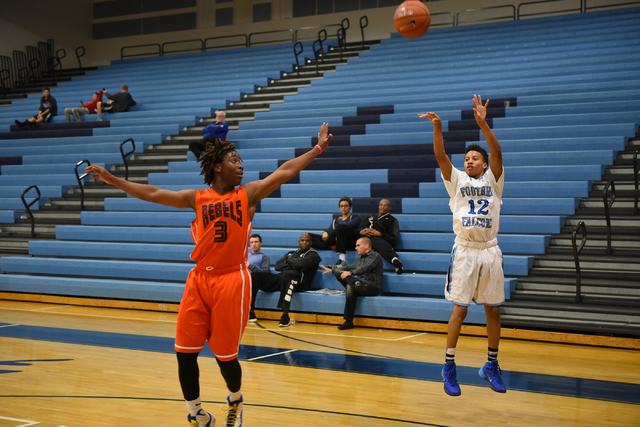 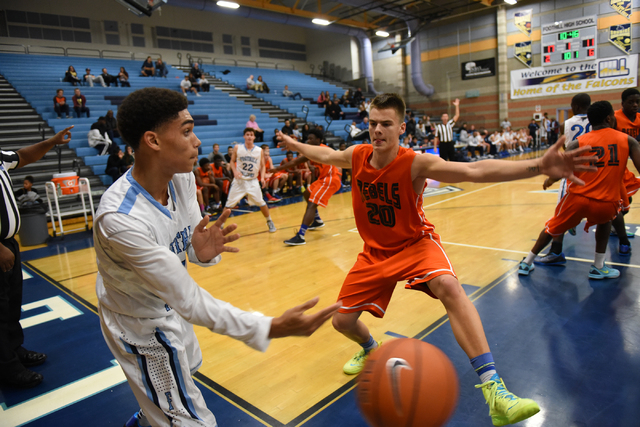 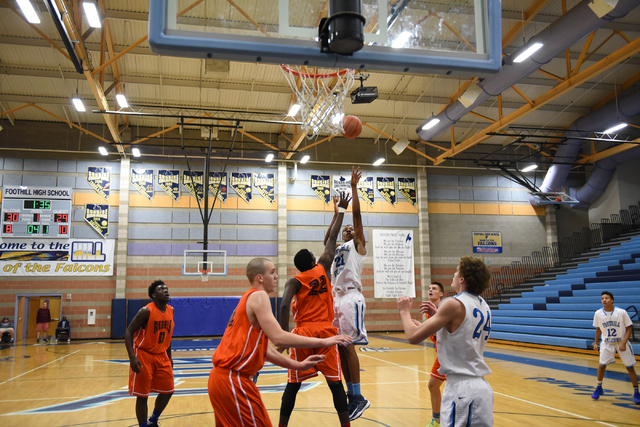 Foothill’s Torrance Littles (21) goes up for a shot against National Prep Academy’s Adesoga Moboligi (22) during the Foothill Holiday Classic championship game played on Monday. Littles had 16 points and 11 rebounds, but i twasn’t enough as the Falcons lost, 65-54. (Martin S. Fuentes/Las Vegas Review-Journal) 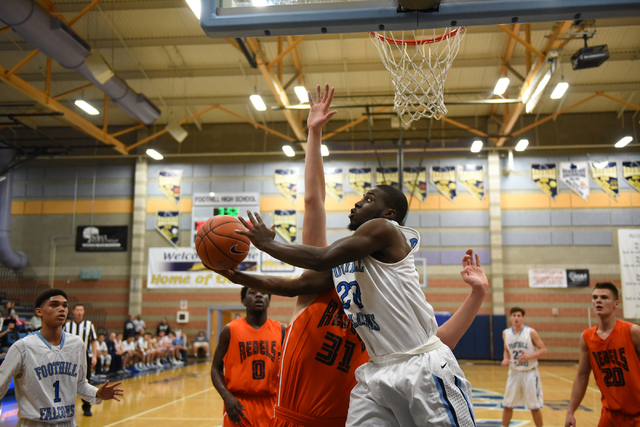 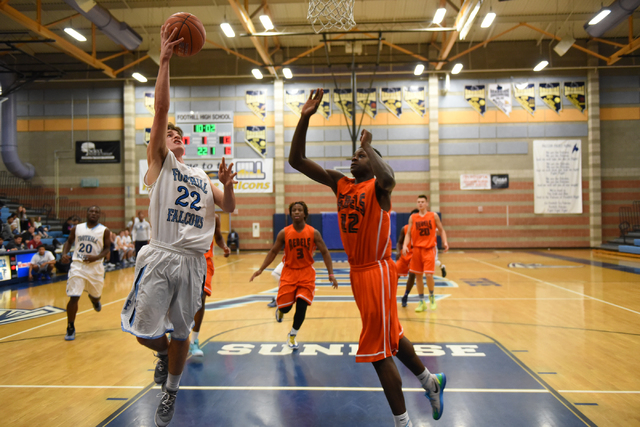 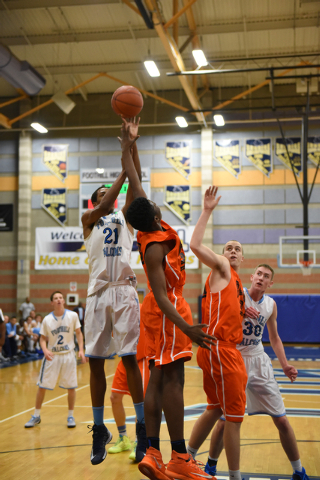 It’s not often that a team that loses in the semifinals finds a way to win a tournament.

But when ThunderRidge (Colo.) couldn’t play in the championship game of the Foothill Holiday Classic because it had reached its game limit, National Prep (Ga.) got a second chance. And the Rebels forced 27 turnovers Monday on the way to a 65-54 win over Foothill for the Gold Division title.

“Our inexperience showed, finally,” Foothill coach Kevin Soares said. “It was the last game, unfortunately, but we’re going to learn from it and get better.”

But that was the last time the Falcons would lead. Yahaya Sedibeh’s follow slam with 10:33 to go tied the game and sparked an 11-2 run that helped the Rebels take over for good.

National Prep forced 15 second-half turnovers and scored 21 points off turnovers in the game.

“We’ve just got to do a better job of taking care of the ball,” Soares said.

Darius Simmons scored all 16 of his points in the second half for National Prep, which lost 62-47 to ThunderRidge in the semifinals.

The Falcons pulled within five several times in the final seven minutes but could get no closer. The last time was on a drive by Kevin Woodland with 3:00 to play that cut the Rebels’ lead to 59-54.

“Our whole goal is to win a regional title and hopefully make the state tournament,” Soares said. “Losing this championship, yeah it sucks, but I tell you what, if it’s going to benefit us down the stretch, we’ll take it.”

Torrance Littles led the Falcons with 16 points, 11 rebounds and three blocked shots. The 6-foot, 7-inch senior fouled out with 1:57 to play.

Ryan Rapp hit four 3-pointers and scored 12 points, and Woodland added 10 points, seven rebounds and seven assists for Foothill. The Falcons were 6 for 15 on 3-pointers after making just 10 3-pointers in their first five games.

“We’re going to need it, because we’ve got an inside game this year, finally,” Soares said of the perimeter shooting. “So people are going to start keying on Torrance a little bit more, and our perimeter guys are going to have to be able to knock down 3s.”

Redemption scored the first 12 points of the game and led until Rapp’s 3-pointer from the left corner with 2:32 to play gave Foothill its first lead, 63-62.

The Falcons didn’t hit a field goal until Curi’s 15-footer from the baseline with 10:56 to go in the first half.

Jeron Bodin had 15 points, and Rapp scored 12 for the Falcons, who got 10 points from Curi.

Palo Verde 69, Silverado 58 — Grant Dressler had 21 points and seven rebounds as the Panthers beat the Skyhawks.

Jaimen Williams and Robert Sutton each added 12 points for Basic.

Valhalla had a final chance, but Cole Henderson’s 3-pointer from the right corner was no good at the buzzer.

Green Valley’s Kevin Omojola hit 1 of 2 free throws with 18.6 seconds left in regulation to give the Gators a 49-47 lead.

But Henderson scored on a drive with five seconds to play to tie the game, and Jarvis missed a 3-pointer from the left wing at the buzzer, forcing overtime.

Henderson had 22 points and 11 rebounds, and Jacob Hammett scored 18 for the Norsemen.

Del Sol 66, Granite Hills (Calif.) 43 — Brian Greer had 18 points as the Dragons rolled to the win in the consolation championship game.

JonRoss Juhas added 17 points, and Rashaun Lawson scored nine for Del Sol, which led 41-21 at the half.

Chaparral 62, Cimarron-Memorial 43 — Marc Silas scored 16 points to lead the Cowboys over the Spartans.

Jaron Ponder and Jadon Brown each scored 10 for Cimarron.

Rancho 67, Shadow Ridge 59 — Kenneth Smith had 21 points and six rebounds, and the Rams rallied to beat the Mustangs.

Ciriman Keita’s fastbreak bucket with 4:47 to play gave the Rams a 55-54 lead, and they didn’t trail again.

Michael Hernandez had 14 points and seven rebounds, and Chrys Jackson had 13 points and five assists for Rancho, which got 11 points and 13 rebounds from Lamont Traylor.