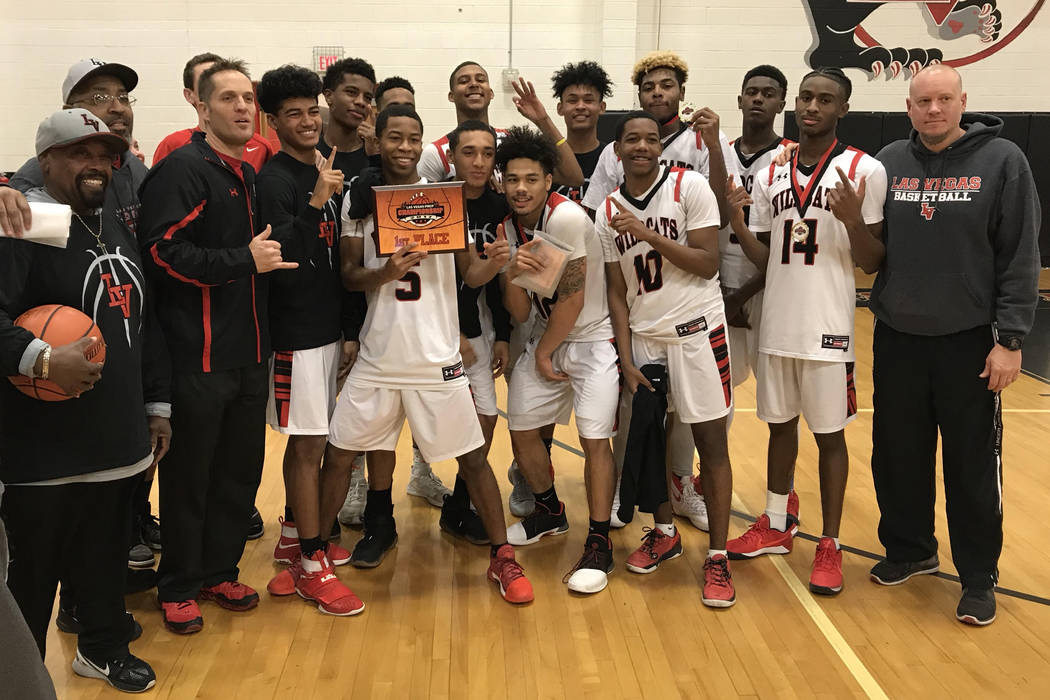 Joyner played all 35 minutes and scored a game-high 31 points to lift host Las Vegas to the tournament championship for the first time in coach Jason Wilson’s 10-year tenure.

Zach Matlock added 16 points and Mory Souhamoro scored 11 for the Wildcats, who were euphoric on their home floor after overcoming a nine-point deficit in the fourth quarter.

Las Vegas dispatched Jefferson (California) in the opening round Tuesday, and beat local foes Chaparral and Desert Pines on Wednesday and Thursday, respectively, to set up its showdown with Eldorado.

The two teams wrestled the lead from one another throughout the first three quarters, and Eldorado seemed to pull away in the fourth quarter in part because of junior wing Jonathan Thomas, who scored all 17 of his points in the second half after sitting out most of the first half with two fouls.

Eldorado led by 10 points midway through the final stanza and by six with a minute to play, but Matlock and Joyner made 3-pointers on back-to-back possessions to tie the game at 65.

“We talk a lot about late-game situations,” Wilson said. “Three minutes is a long, long time in a basketball game.”

The Sundevils had two chances to win the game in the final seconds, but both of their looks were contested and Matlock’s layup attempt rimmed out at the buzzer on the other end of the court.

Joyner said he knew the Wildcats had the game in the bag, though, and proceeded to start the extra session with a pair of layups.

The rest of his teammates followed suit, and Las Vegas completed its comeback by outscoring Eldorado 13-2 in the three-minute overtime period.

“To come back from a double-digit deficit, it means a lot to us,” said Joyner, who played every minute in three of his team’s four games this week. “We had the momentum going into overtime. We knew we had it.”

Chaparral 72, Jefferson (Calif.) 56 — Jonathan Tendale scored 19 points to lift the Cowboys to a decisive victory over the Democrats in consolation play.

Innovations International 61, Santa Fe (Calif.) 64 — Justin Evans poured in 27 points to lift the Ambassadors to a blowout victory over the Chiefs.

Garfield (Calif.) 51, Western 32 — Kizhonie Blunt scored 19 points for the Warriors in their loss to the Bulldogs in consolation play.

No other Western player scored more than five points.

Merced (Calif.) 48, Valley 40 — Andre Jones scored 10 points for the Vikings in a loss to the Bears in consolation play.