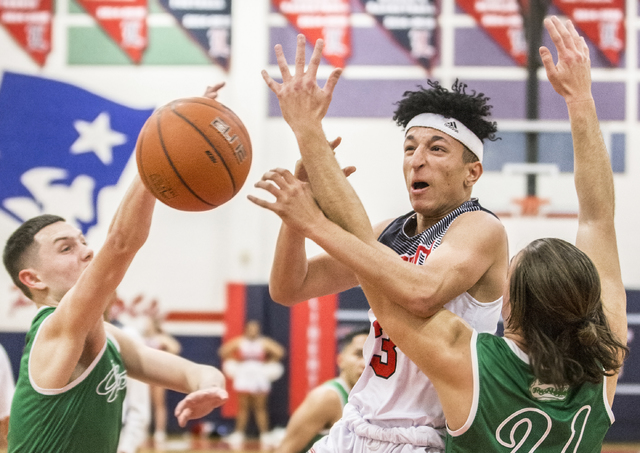 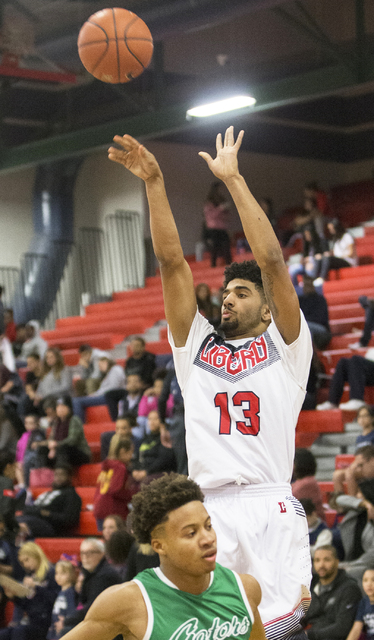 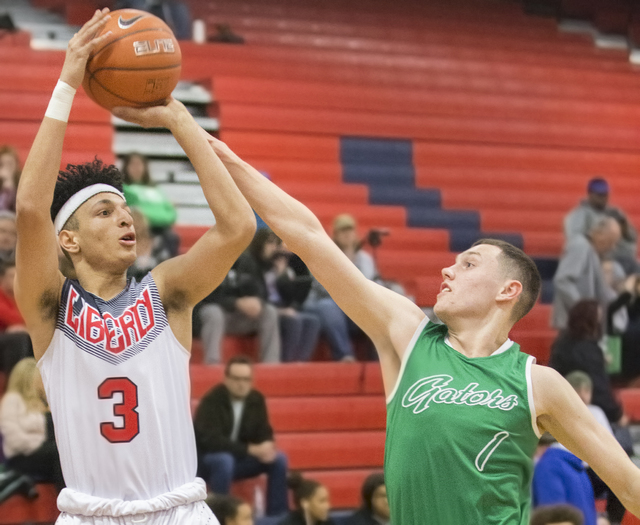 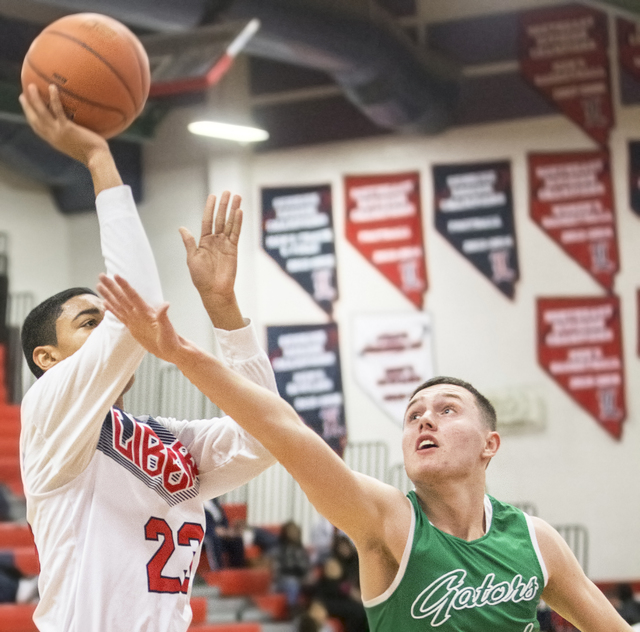 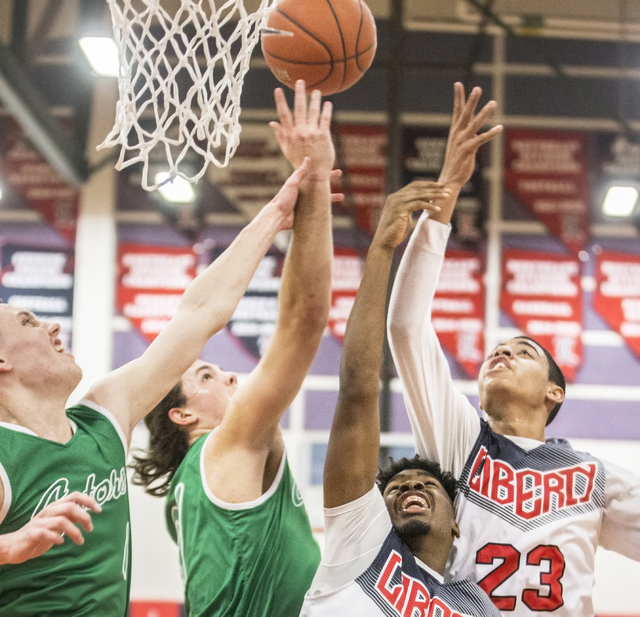 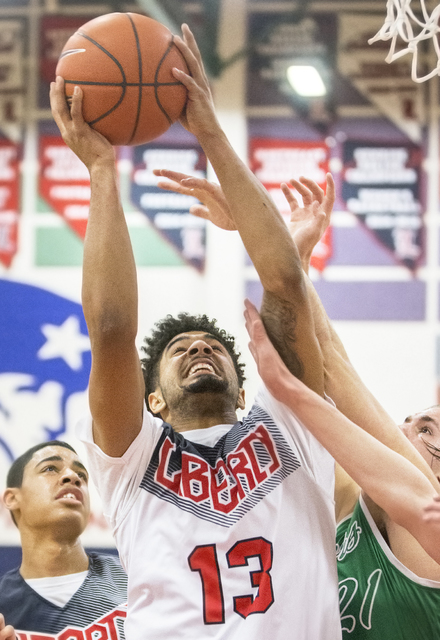 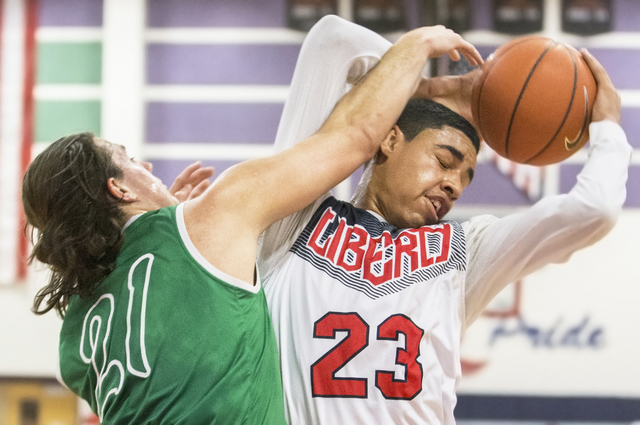 Liberty’s Julian Strawther (23) gets fouled by Green Valley’s Canyon Lewis (21) while bringing down a rebound during the Patriots home matchup with the Gators on Monday, Jan. 30, 2017, at Liberty High School, in Las Vegas. (Benjamin Hager/Las Vegas Review-Journal) @benjaminhphoto 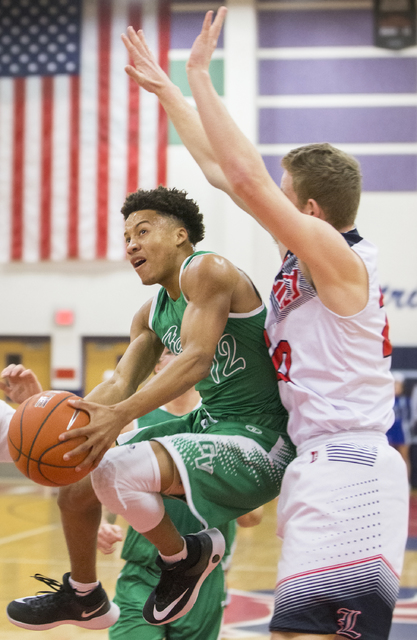 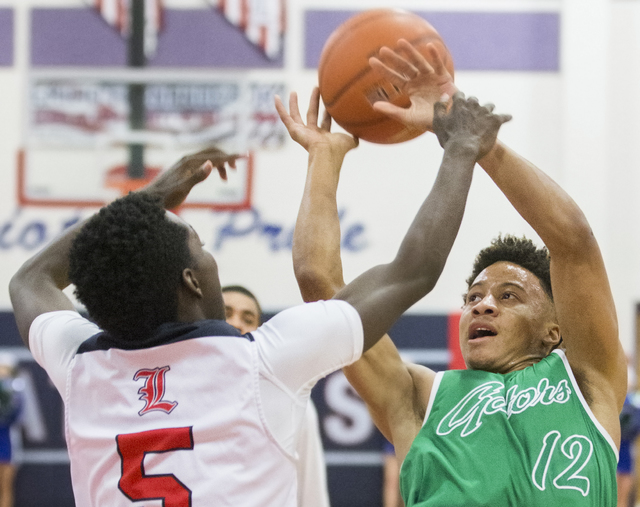 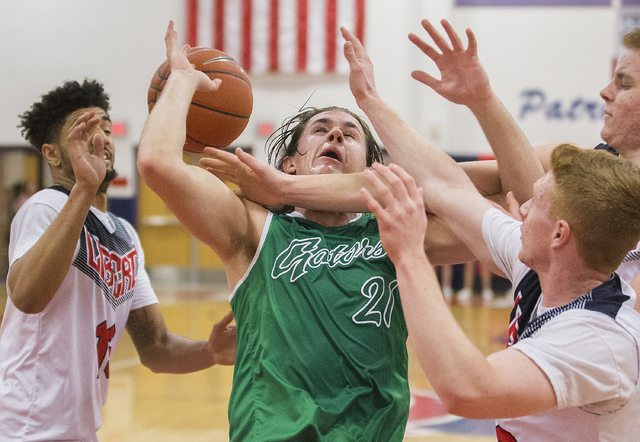 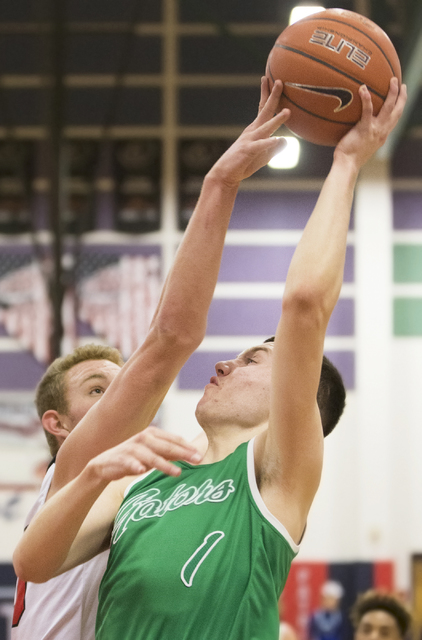 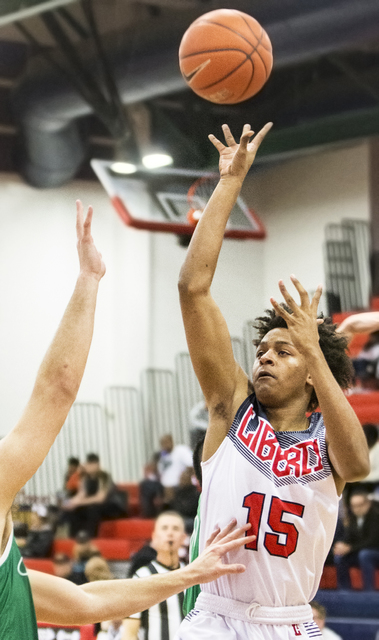 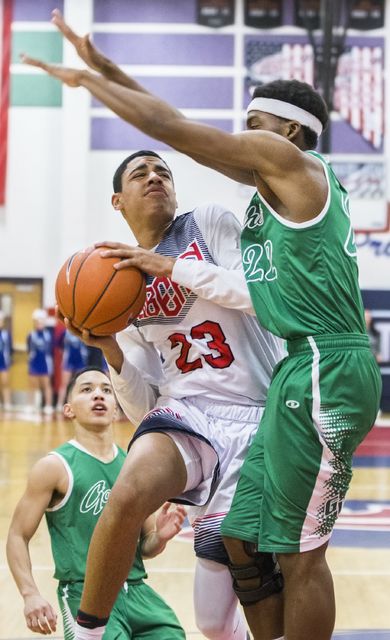 Liberty’s Julian Strawther (23) collides with Green Valley’s Deontae Tillman (22) on his way to the rim during the Patriots home matchup with the Gators on Monday, Jan. 30, 2017, at Liberty High School, in Las Vegas. (Benjamin Hager/Las Vegas Review-Journal) @benjaminhphoto 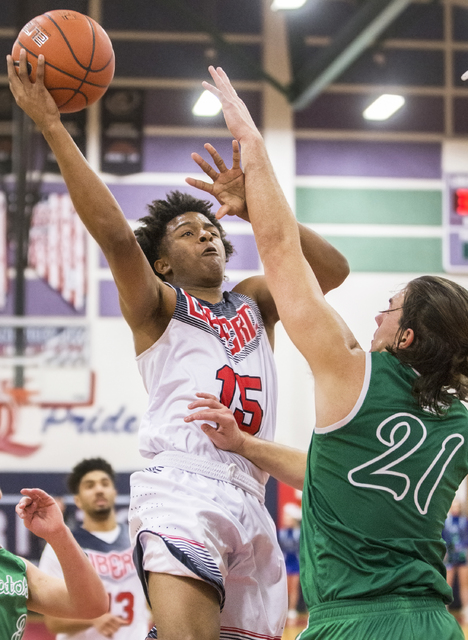 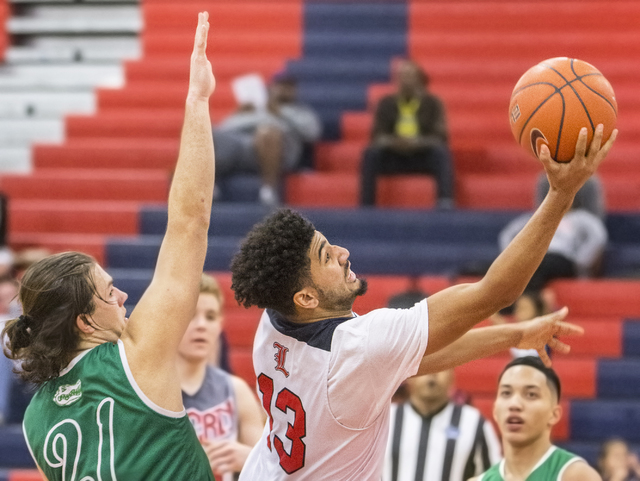 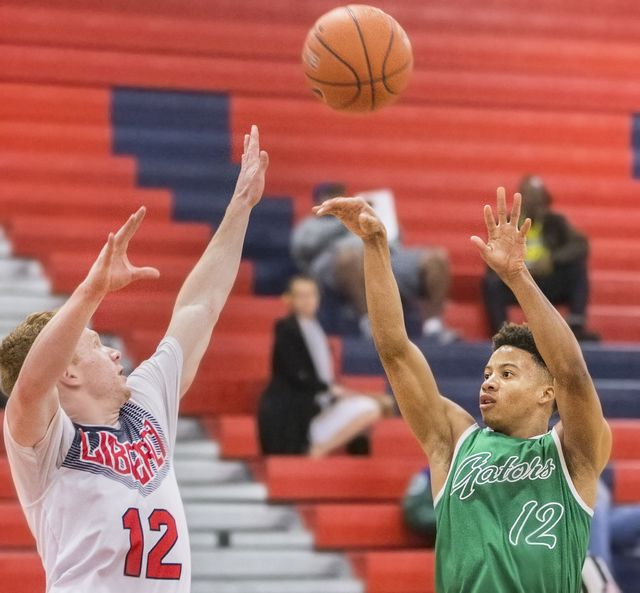 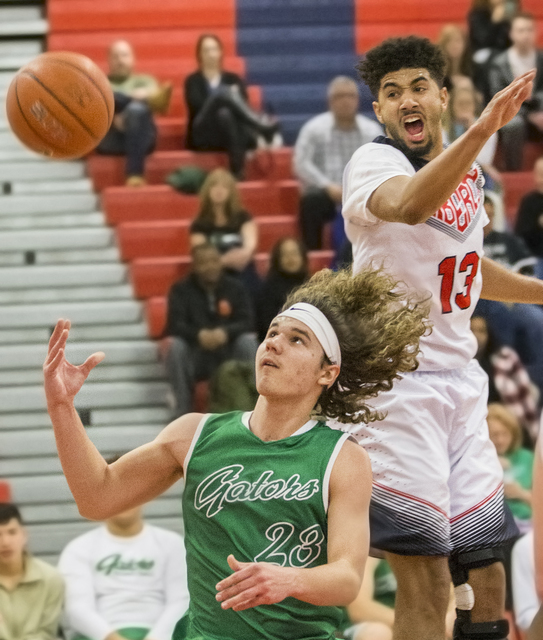 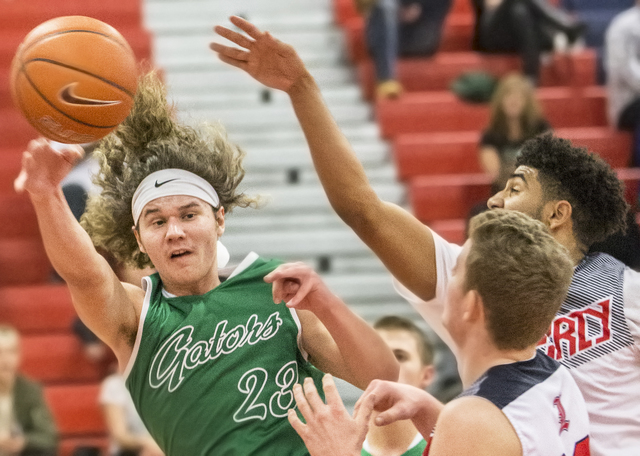 There was still 5:46 left on the clock Monday night, but everyone in the Liberty gym knew it was over.

Liberty’s Dyllan Robinson swung the pass from the top of the key to Davion Ware in the corner, and the Patriots’ bench got to its feet before Ware even started his wide-open shot. When he drained it, the home crowd erupted as Green Valley coach Lorenzo Jarvis called a timeout with a dejected look on his face.

Ware’s 3-pointer early in the fourth quarter put the Patriots’ boys basketball team up by 18, to that point its biggest lead in a game it would go on to win 70-46.

“That three gave us a good boost and gave us a great lead,” Ware said. “Once we hit the three we had the game in control and we just had to maintain.”

Ware’s shot was the culmination of a nearly perfect second half for the Patriots (10-13, 3-4 Southeast League). Leading by just four at halftime, they outscored the Gators 40-20 in the third and fourth quarters. Liberty’s Braden Cain hit two 3-pointers to open the half and seize momentum, then Liberty’s defense only allowed nine field goals in the second half and was only charged with one foul that led to free throws.

“Everything contributed to that run right there,” Liberty coach Stefan Berg said.

Then came free throws. After last Thursday’s game in which Liberty lost by one point and shot 19 of 38 from the line, Berg hammered into his squad the necessity of making them. On Monday the Patriots were 17 of 21, including 7-for-7 in the third quarter to help pull away.

Liberty’s win over Green Valley, coupled with a Silverado loss to Foothill on Monday, helped the Patriots break a three-way tie and claim sole possession of third place in the Southeast League. With only three league games remaining before the end of the season and the four teams making the playoffs, Monday’s win was a big step in helping the Patriots return to the postseason after winning their division last year.

“It was a must-win for us,” Ware said. “Earlier in the season we lost a close game to Green Valley. We had to come back and get this win.”

“The morale of the team is high now.”