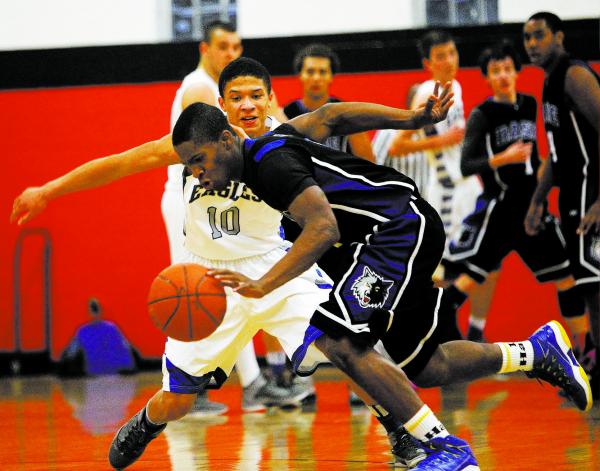 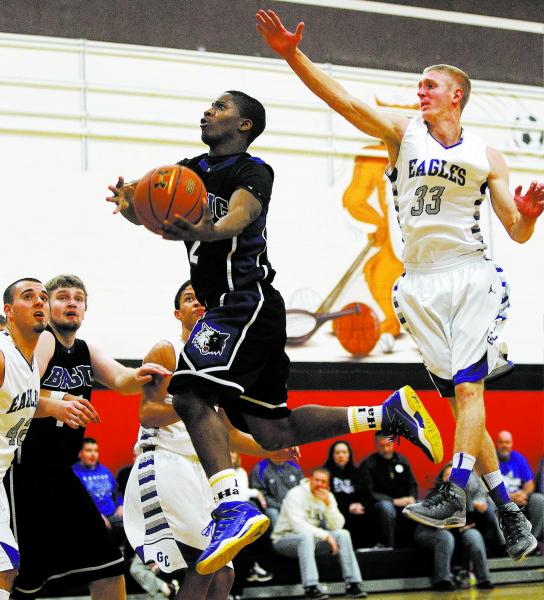 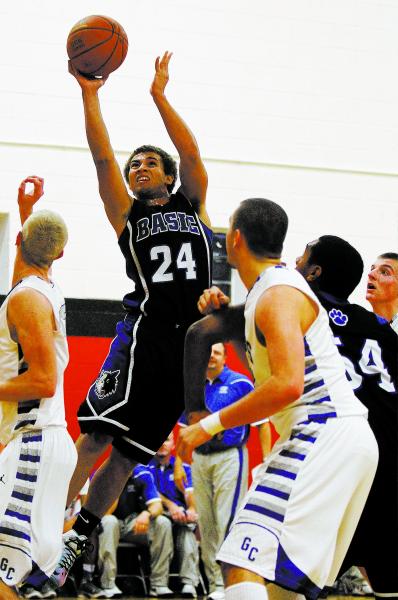 Basic’s Chandler Kamai (24) shoots over Graves County’s Eamon Hannon, left, and Zach Kimbler during the Las Vegas Prep Championship. Kamai had 12 points, but the Eagles rolled to a 70-37 win over the Wolves.

Graves County (Ky.) wasn’t the most imposing team when it took the floor in the back gym at Las Vegas High on Thursday. But maybe the radio crew in the corner should have been a clue that the Eagles meant business.

Graves County placed four scorers in double figures and used a 16-1 run in the second half on the way to a 70-37 win over Basic in the Las Vegas Prep Championship.

“We came into this tournament wanting to play the best,” Basic coach Leonard Taylor said. “Sometimes you’ve got to be careful what you ask for.”

Jake Williams was 4-for-4 from the field and had 14 first-half points to help the Eagles (9-0) take a 35-23 halftime lead, and things got only worse for Basic.

The Wolves (3-5) turned the ball over on three of their first four second-half possessions, as Graves County went on a 9-0 run to start the half.

And after Chandler Kamai scored five straight points for Basic, the Wolves would miss 15 consecutive field goals as the Eagles stretched their lead to 60-29.

“It’s a team, not just individuals,” Taylor said of Graves County, which doesn’t have a player taller than 6 feet, 6 inches. “They play good team basketball.”

Tyler Anderson’s 3-pointer with 4:27 to play ended Basic’s stretch of 8 minutes, 38 seconds without a field goal, but by then Graves County led 60-32.

The Eagles did an outstanding job of sharing the ball. Five players had at least three assists — more than Basic recorded as a team.

“I’ve got two of our top six sitting on the bench for ineligibility,” Taylor said. “I have another starter who missed most of the first half because he missed the last practice. Just lack of dedication issues, as far as not doing what it takes in the classroom and letting their teammates down out there.”

“They were active on the glass, talking on (defense) all five guys talking and doing their part,” Taylor said. “I’m curious to see how they do in this tournament.”

Taylor said he hopes his team can learn from the way the Eagles played.

“That’s a great ballclub for us to play, but we need to have everybody to really show what we’re capable of,” Taylor said. “If you’re playing without two or three of your top five or six against a team like that, you can get exposed. It was a tough night. Hopefully we can bounce back tomorrow.”

Douglas had a chance to tie or take the lead with 1:01 to play, but Pat Johnson missed two free throws, and Amani Gill’s dunk with 41 seconds pushed the Cimarron lead to three.

Garrison hit a free throw with 14.5 seconds to play to make it 73-69. A.J. Paffenberger hit a 3-pointer with two seconds to go to cut the lead to one, but the Tigers wouldn’t get the ball back.

Kyle Skurow had 14 points, and Broussard scored 11 for the Spartans.

James Herrick led Douglas with 15 points. Jaden Wass added 12 points, 10 in the second half, for the Tigers.

Silverado 37, Huntington Beach (Calif.) 35 — At Las Vegas, Isaiah Glover scored all 10 of his points in the second half as the Skyhawks rallied to edge the Oilers.

Glover was 4-for-4 from the foul line in the final 55 seconds to help seal the win. His final two free throws put Silverado up 37-32, and Huntington Beach’s Ryan Morrissey hit his third 3-pointer of the second half with two seconds left for the final margin.

Joe Baldi added eight points and four rebounds for the Skyhawks, who won despite having more turnovers (13) than field goals (12).

Garfield (Calif.) 80, Mojave 70 — At Las Vegas, Jashaun Agosto scored 18 points, and the Bulldogs placed five players in double figures in a win over the Rattlers.

Valley 72, Cesar Chavez (Calif.) 22 — At Valley, Spencer Mathis scored 14 of his 22 points in the opening half to build a 45-15 halftime lead, and the Vikings went on to easily handle the Titans.

Liberty 68, Malibu (Calif.) 58 — At Valley, Tyler Newman hit six 3-pointers and scored 26 points as the Patriots got by the Sharks.

Jayven Hines-Stockton added 12 points for Liberty, which led 35-27 at the break.

Justin Holmes had 21 points for the Sharks, who also got 14 points from Jonathan Baldwin.

Twelve players scored for Woodbridge, which stormed out to a 34-3 halftime lead.