If you are having problems accessing today’s e-Edition, please click on this link VIEW E-EDITION
By Damon Seiters Las Vegas Review-Journal
December 26, 2018 - 10:46 pm 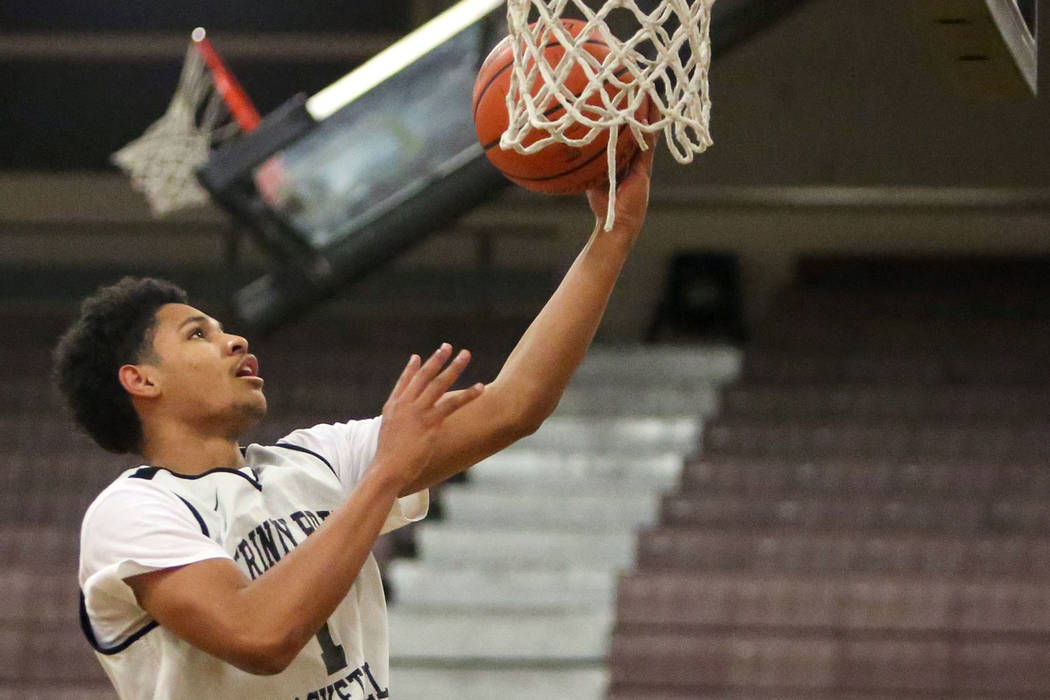 Trinity’s Daishen Nix (1) jumps up to take a shot during the second half of a basketball game against Basic High School at Las Vegas High School in Las Vegas, Wednesday, Dec. 26, 2018. Caroline Brehman/Las Vegas Review-Journal 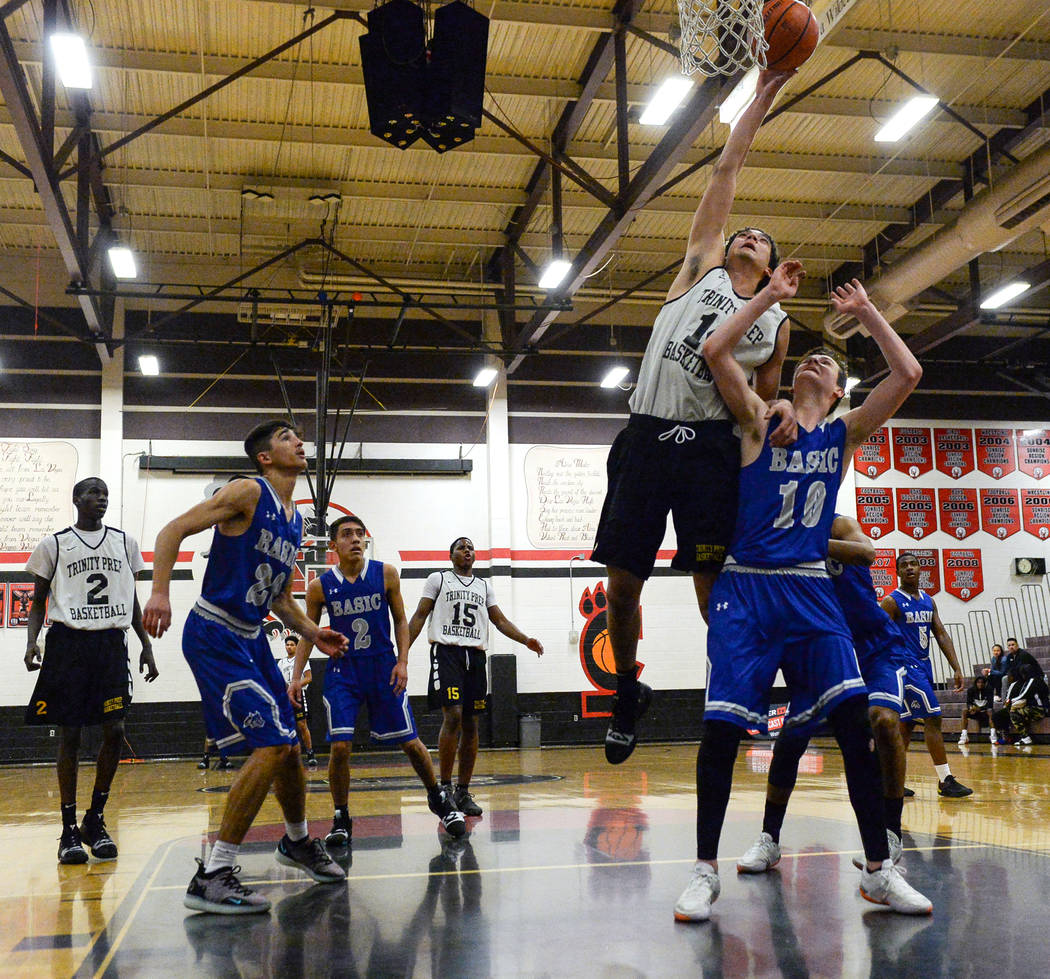 Trinity’s Enrique Lopez Baez (14) takes a shot while under pressure from Basic’s Isaiah James (10) during the first half of a basketball game at Las Vegas High School in Las Vegas, Wednesday, Dec. 26, 2018. Caroline Brehman/Las Vegas Review-Journal 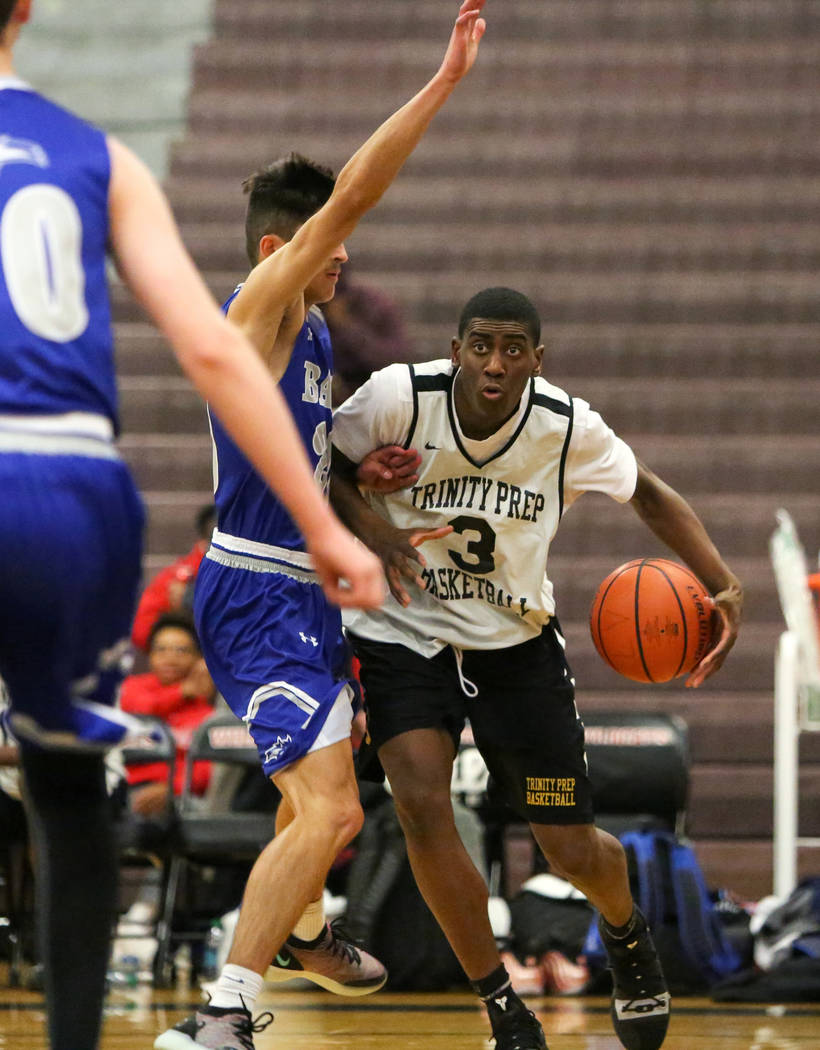 Trinity’s Kevin Giles (3) looks to pass the ball while under pressure from Basic’s Demetrius Vigil (20) during the second half of a basketball game at Las Vegas High School in Las Vegas, Wednesday, Dec. 26, 2018. Caroline Brehman/Las Vegas Review-Journal 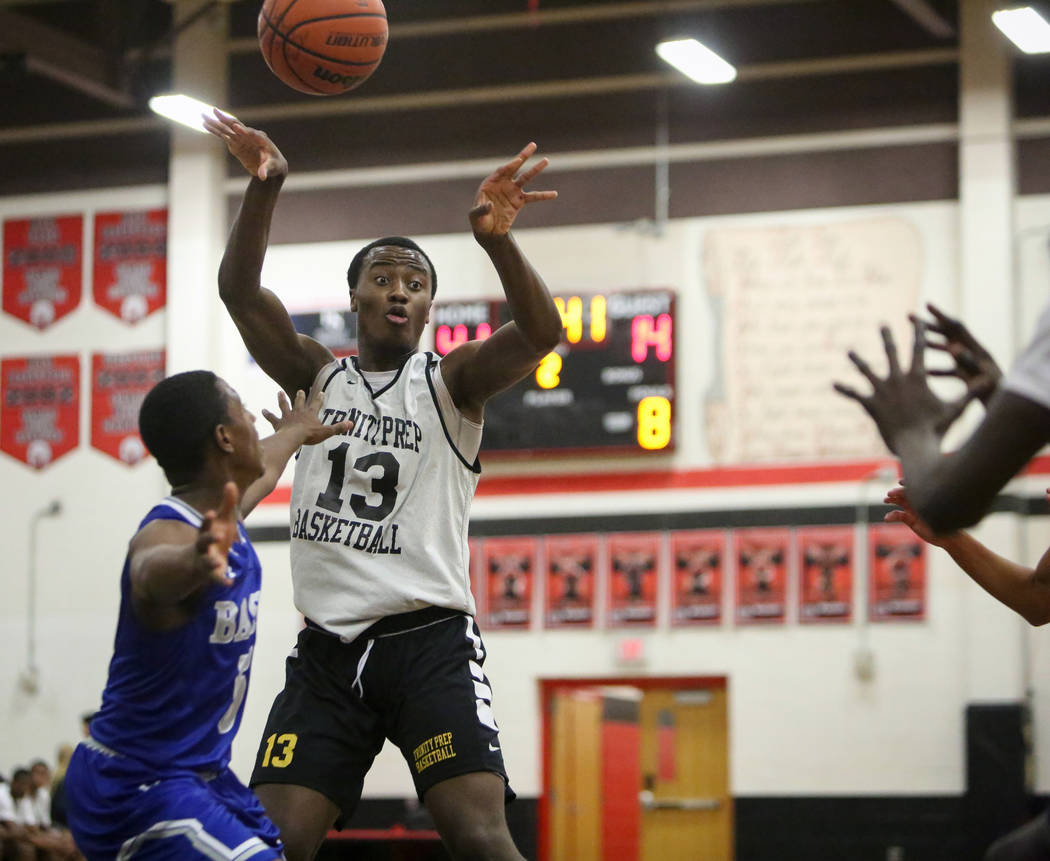 Trinity’s Zaba Bangala (13) passes to a teammate while under pressure from Basic’s Kalauini Keyes (5) during the first half of a basketball game at Las Vegas High School in Las Vegas, Wednesday, Dec. 26, 2018. Caroline Brehman/Las Vegas Review-Journal 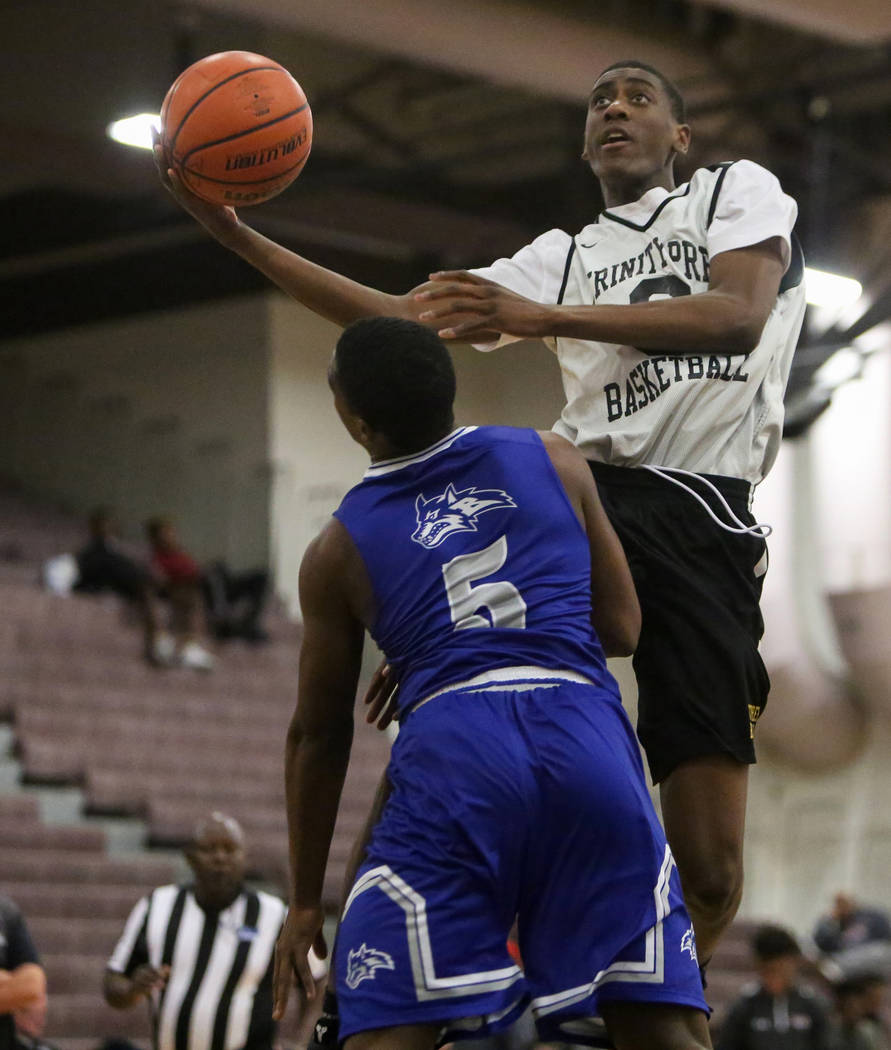 Trinity’s Kevin Giles (3) jumps up to take a shot while under pressure from Basic’s Kalauini Keyes (5) during the second half of a basketball game at Las Vegas High School in Las Vegas, Wednesday, Dec. 26, 2018. Caroline Brehman/Las Vegas Review-Journal 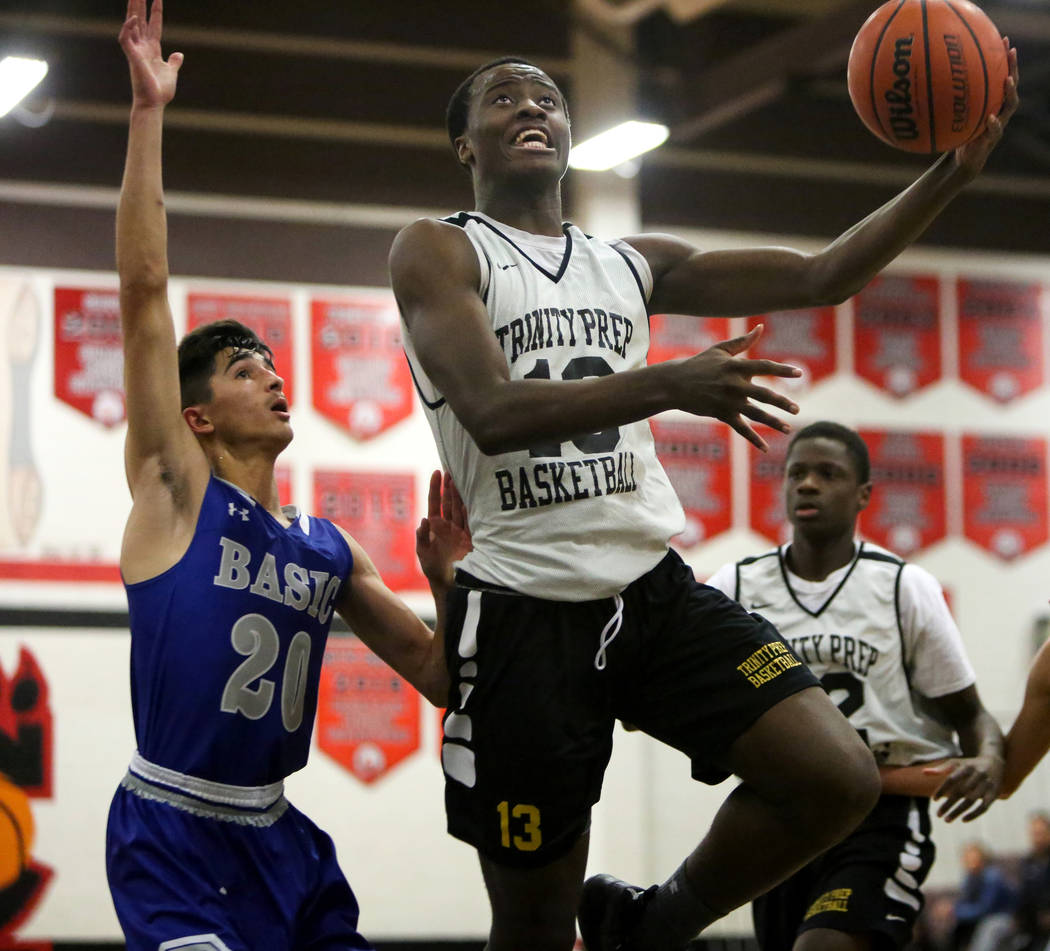 Trinity’s Zaba Bangala (13) jumps up to take a shot while under pressure from Basic’s Demetrius Vigil (20) during the first half of a basketball game at Las Vegas High School in Las Vegas, Wednesday, Dec. 26, 2018. Caroline Brehman/Las Vegas Review-Journal

The best player on the floor made one basket in the first half.

But points don’t even begin to tell the story.

Trinity point guard Daishen Nix had eight assists in the first half alone to lead the Thunder to a 71-27 first-round victory over Basic in the Las Vegas Prep Championship on Wednesday at Las Vegas High.

Nix, who has developed into one of the top players in the junior class, finished with 15 points, 10 rebounds, nine assists, three steals and a blocked shot.

Trinity led 46-16 at halftime, so the only intrigue was how many assists Nix might end up with. And the game’s biggest disappointment might have come when Jose Cuello’s 3-pointer rimmed out with about five minutes to play. Had it gone in, it would have completed a triple double for Nix, who checked out of the game moments later.

“Guys know when they run the lane, they’re going to get the ball,” Lockridge said. “And if they didn’t know, they know now. We tell them, ‘Spacing, run the lane. We’ve got the best passer in high school basketball.”

Nix has made huge strides since arriving at Trinity from Alaska as a freshman. Lockridge said his point guard was overmatched at times that season, but that’s not the case anymore.

“I would tell him, ‘They’re not better than you, they’re bigger and stronger than you,’ ” Lockridge said. “And now he’s big and he’s strong, and his confidence is going. I’m excited for his future, because I don’t know what the limit is.”

Cuello scored 15 points and Zaba Bangala had 12 points and six rebounds for Trinity, which forced 30 turnovers.

Dylan Hushaw added 24 points, and Caleb Stearman scored 22 for Foothill, which was 24-for-27 from the free-throw line.

Jack Nadon scored 18 to lead Aliso Niguel, which made 17 3-pointers.

Silverado 53, Mountain View (Utah) 40 — Martell Williams had 16 points to lead the Skyhawks over the Bruins.

Myles Daniels had nine points and nine rebounds for Silverado.

Mountain View pulled within a point at 32-31 on a 3-pointer by Ben Mella with 7:25 to play, but Silverado answered with a 7-2 run to retake control.

Eldorado 49, Centennial (Ariz.) 45 — LeLenn Ross had 14 points as the Sundevils beat the Coyotes.

Jalen Malone added 10 points for Eldorado, which trailed 31-23 at the half.

Golden Valley (Calif.) 66, Las Vegas 62 — Brandon Nole had 19 points, including the go-ahead 3-pointer with about four minutes to play, as the Grizzlies beat the Wildcats.

Nole’s 3-pointer gave Golden Valley a 58-56 lead, and he followed that with a steal and a basket to push the lead to four.

Cypress (Calif.) 68, Chaparral 53 — Anthony Tello poured in 26 points to lead the Centurions over the Cowboys.

Sameal Anderson led Chaparral with 14 points, and Meshach Hawkins and Dejonte Allen each scored 12 for the Cowboys.

Michael Martin led a balanced attack for Spring Valley with 14 points. Jahlani Blair added 12 points, and A’mari James scored 11 for the Grizzlies, who trailed 34-31 at the half.

James Wade scored 17 points to lead Western. Gawain Powell scored all 12 of his points in the second half and added seven rebounds for Western.