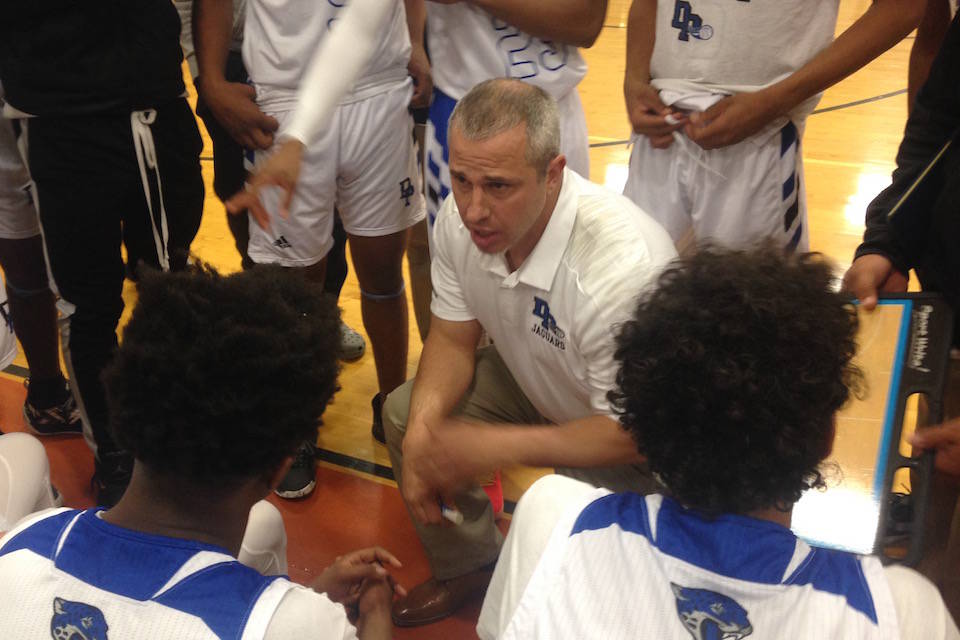 Desert Pines coach Mike Uzan talks to his team between quarters of the Jaguars’ 84-67 win over Centennial in the Mountain Region semifinals at Legacy on Tuesday, Feb. 19. (Bartt Davis/Las Vegas Review-Journal)

It also didn’t take long to figure out Centennial didn’t have an answer.

The Jaguars hit 10 of 17 from the field in the first quarter, including five 3-pointers, opened up a 26-16 lead and never looked back en route to an 84-67 victory over Centennial.

The win moved Desert Pines (22-6) into Thursday’s region final against Arbor View (22-7). Both teams qualified for next week’s Class 4A state tournament.

“We put a lot of shots up in practice so we hit some shots today,” said Milos Uzan. “We wanted to put our foot on their throat first and keep it like that.”

Uzan and Dayshawn Wiley each scored a game-high 19 points for the Jaguars. Darnell Washington added 16 points and 10 rebounds, and Cimarron Conriquez chipped in with 13 points.

“We know Centennial is good, and we watched a lot of tape on them. We just, we were due for one of those,” Desert Pines coach Mike Uzan said of his team’s shooting performance. “Our guys were due for a game like that, we’ve been gritting them out and defending and grinding out and we were just due for an explosive night like that, and I think tonight was it.”

After Centennial cut the Jaguars’ lead to 18-14 late in the first quarter, Desert Pines closed the period on an 8-2 run and never relinquished its double-digit lead from there.

Milos Uzan scored 10 of his points in the second quarter, sparking a 15-4 run to close the half as the Jaguars led 46-24 at halftime.

“Milos is just a team guy, he loves his teammates and he cares about winning first,” Mike Uzan said. “He doesn’t care about anything else, he wants to win. And it shows out there. He’s having fun, he’s facilitating the ball, he’s getting it to four or five different guys every time. It’s not the same guy every time and he knows that.”

The Bulldogs did their best to claw back into the game, opening the second half on a 13-5 run, but Desert Pines answered back with a stringent defense to create transition basketball, which translated to a 10-0 run that included back-to-back slam dunks that essentially buried the dagger in the Bulldogs.

“We lay our hat on our defense and wanted to make sure that we didn’t give anything up easy and make sure we keep them out of the paint as much as possible,” Mike Uzan said. “That was one our goals on our board this week (to qualify for state). We had three goals for the week, and we got through one of them.”

Arbor View 80, Cheyenne 64 — At Legacy, trailing by one at halftime, the Aggies used a 25-8 run — culminated by back-to-back-to-back 3-pointers — to seize momentum and pull away. Arbor View shot 9 of 17 from the field in the third quarter, including making five 3-pointers.

Favor Chukwukelu led all scorers with 29 points, and Tre Williams, Donovan Yap and Larry Holmes each added 14 points for the Aggies.

Tommie Lindsey and Damion Bonty each had 17 to lead Cheyenne. J.D. McCormick and Glenn Taylor scored 12 apiece for the Desert Shields (13-15).