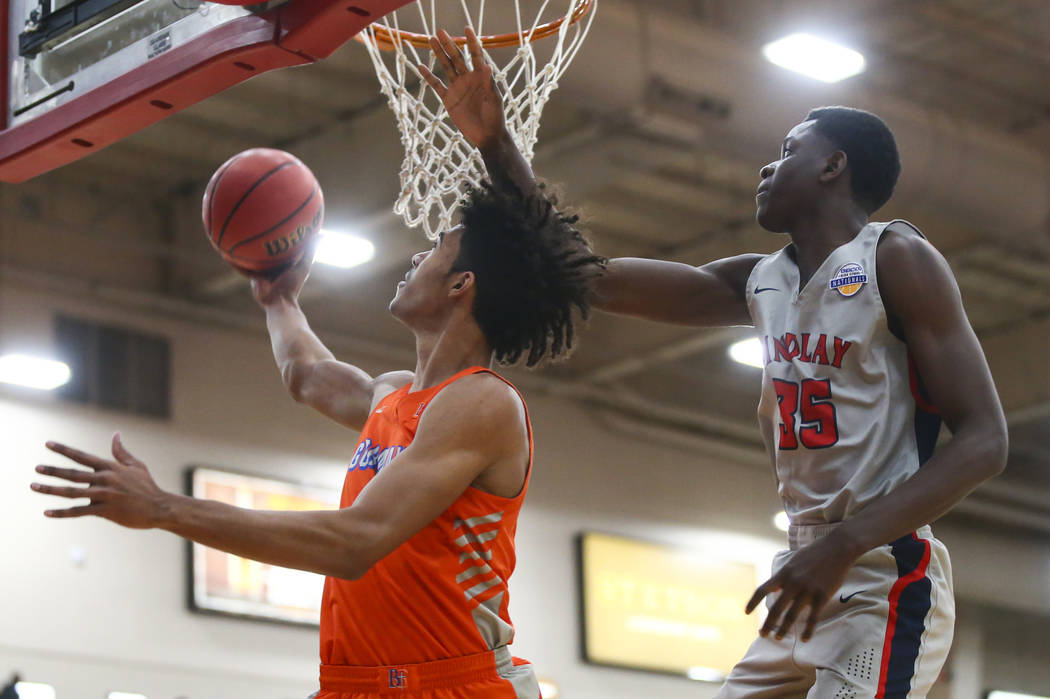 Bishop Gorman's Isaiah Cottrell goes to the basket in front of Findlay Prep's Alex Tchikou (35) during the first half of the annual Big City Showdown basketball game at the South Point in Las Vegas on Saturday, Jan. 19, 2019. Chase Stevens Las Vegas Review-Journal @csstevensphoto

Basketball teams have been busy this holiday season, playing in tournaments near and far to get ready for what’s to come in the new year.

That’s when league play will get into full swing. Most teams in the valley already have played a league game or two, other than those in the Southeast League, which will get started Jan. 8.

Here are a few pressing questions as the league races heat up.

Which is the most competitive league?

Each league should have some intrigue, but the most competitive at the top in boys and girls should be the Southwest. Bishop Gorman’s boys have won eight straight state championships, but Durango and Silverado are both off to a 2-0 start in league play.

Durango has a new coach in Chad Beeten, who moved over from last year’s state runner-up Clark, and already has defeated his old team.

On the girls side, it figures to be a three-team race between last year’s state runner-up Bishop Gorman, Desert Oasis and Spring Valley. Spring Valley got an early leg up with a 77-73 win over Gorman on Dec. 11, and the next big matchup will be Jan. 7 when the Grizzlies host Desert Oasis.

What are some can’t-miss player matchups?

The Southeast League boys play starts with a bang, with Coronado hosting Liberty. That means a battle of arguably the two best players in the valley in Coronado’s Jaden Hardy and Liberty’s Julian Strawther.

Hardy, a 6-5 junior guard, is ranked No. 5 in his class by ESPN and averaged 25.6 points, 8.6 rebounds and 7.3 assists last season. Strawther is signed with Gonzaga, and the 6-7 wing already has a 51-point outing to his name this season.

The Southwest boys league is full of primetime guard matchups. Silverado’s Martel Williams and Durango’s Anthony Hunter are 20-plus-point scorers, and Williams defies his size at 6-3 to collect nearly 10 rebounds per game. They’ll both have to contend with Zaon Collins and Will McClendon at Gorman.

The combination of guard Eliyjah Pricebrooks and forward Desi-Rae Young gives the Desert Oasis girls an inside-outside game that is tough to stop. Spring Valley counters with guards Aaliyah Gayles and Riahana Davis, and forward Garrisen Freeman, all double-digit scorers.

Can anybody upend the Gorman boys and Centennial girls dynasties?

Gorman has won a state record eight straight state championships in the boys ranks, while the Centennial girls are aiming for a record sixth consecutive crown. Both are favored to hoist the trophy again, but there are potential challengers.

Hardy and Strawther give Coronado and Liberty, respectively, a puncher’s chance against anybody. Desert Pines has solid balance and is led by Milos Uzan, a sophomore point guard who was the Northeast League MVP. Donovan Yap helped Arbor View to the state tournament last season, and the Aggies should be a tough out again.

For the girls, Desert Oasis gained state tournament experience last year, as did Canyon Springs, which returns Jeanette Fine as one of the valley’s most well-rounded players. Spring Valley will be difficult to deal with, and Gorman can never be underestimated. Liberty figures to cruise through the Southeast and make some noise as well.