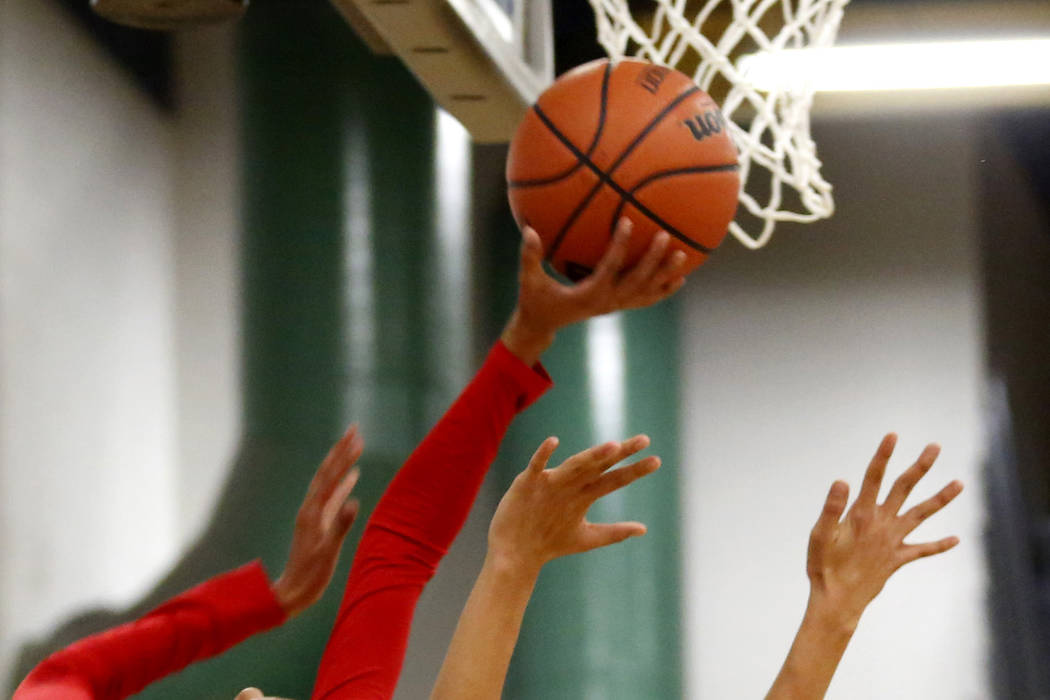 Cimarron-Memorial 66, Cheyenne 65 — At Cheyenne, Brian Lang had 18 points, and the Spartans made three free throws in the final 30 seconds to edge the Desert Shields.

Mahki Walker added 17 points for Cimarron, which shot 16-of-21 from the foul line. Glenn Taylor led all scorers with 23 points for Cheyenne.

Shadow Ridge 74, Moapa Valley 52 — At Mesquite, Aiden Hurley led all scorers with 21 points as the Mustangs rolled past the Pirates in the Bulldog Invitational.

Chaparral 75, Mojave 67 — At Chaparral, Elijah Briggs led five Cowboys in double figures with 17 points as they held off the Rattlers.

Sierra Vista 87, Kanab (Utah) 57 – At Mesquite, Mason Engmann led four Sierra Vista players in double figures with 26 points as the Mountain Lions rolled to the win in the Bulldog Invitational.

Antonio McCoy chipped in 19 points for Sierra Vista, which raced out to a 34-14 lead after the opening quarter.

Foothill 86, Boulder City 60 — At Boulder City, the Falcons made 11 3-pointers on their way to their win over the Eagles.

Pahrump Valley 54, Enterprise (Utah) 51 — At Mesquite, Brayden Severt scored 20 points as the Trojans held on for the win in the Bulldog Invitational.

Enterprise was just 4-for-17 from the free-throw line.

Dixie 58, Centennial 56 — At St. George, Utah, Ethan Bennett made two free throws with 3 seconds remaining to lift the Flyers past the Bulldogs.

The Bulldogs did get a desperation shot off at the buzzer but it didn’t fall.

Marqis Turner scored 13 points to lead the Bulldogs, who struggled from the free-throw line, making 9 of 20 attempts.

Dominique Clifton added 16 points for Eldorado, which outscored Somerset-Losee 24-1 in the fourth quarter.

Johnny Bass and Johnelle Brantley each scored 10 points for the Lions.

Lincoln County 56, Virgin Valley 51 — At Mesquite, Cody Zile had 15 points, and Alex Vincent scored 14 as the Lynx defeated the Bulldogs in the Bulldog Invitational.

Rancho 62, Kingman Academy 49 — At Page, Arizona, James Brown led all scorers with 25 points as the Rams defeated the Tigers in the Lake Powell Holiday Shootout.

Arbor View 66, Bonanza 56 — At Bonanza, Tyre Williams led all scorers with 21 points as the Aggies defeated the Bengals.

Findlay Prep 69, Imagine Prep (Ariz.) 25 — At Surprise, Arizona, Raymond Hawkins scored 20 points to lead the Pilots to an easy victory over the Panthers.

P.J. Fuller added 15 points, and Blaise Beauchamp scored 12 for Findlay Prep, which led 33-8 at the half.

Guyer (Texas) 80, Bishop Gorman 62 — At Scottsdale, Arizona, Jalen Wilson had 19 points to lead the Wildcats over the Gaels at the Hoophall West showcase.

Will McClendon had 23 points to lead Gorman, which trailed 40-32 at the half.

Isaiah Cottrell and Zaon Collins each added 10 points for the Gaels.

Tech 68, Indian Springs 29 — At Tech, Zail Lewis scored 18 points to lead the Roadrunners in a rout of the Thunderbirds.

Luis Avila scored 12 points, and Maverick Cacnio added 11 points for Tech, which led 51-21 at the half.

Winslow 70, Sunrise Mountain 52 — At Flagstaff, Ariz., Zach Wagner scored 17 points to lead the Bulldogs in a rout of the Miners.

Battle Mountain 41, Pahranagat Valley 36 — At Virginia City, Stockton Maxwell scored 20 points, but the Panthers still fell to the Longhorns in the Comstock Classic.

Sierra Lutheran 55, Pahranagat Valle 42 — At Virginia City, Maxwell scored 30 but it wasn’t enough as the Panthers fell to the Falcons in the Comstock Classic.