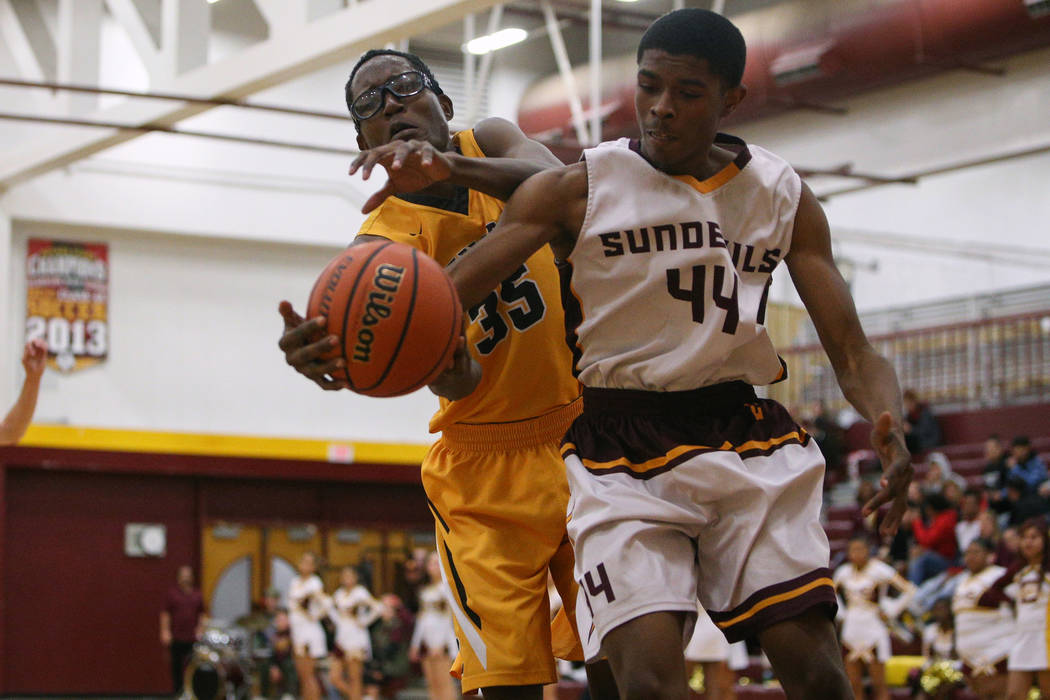 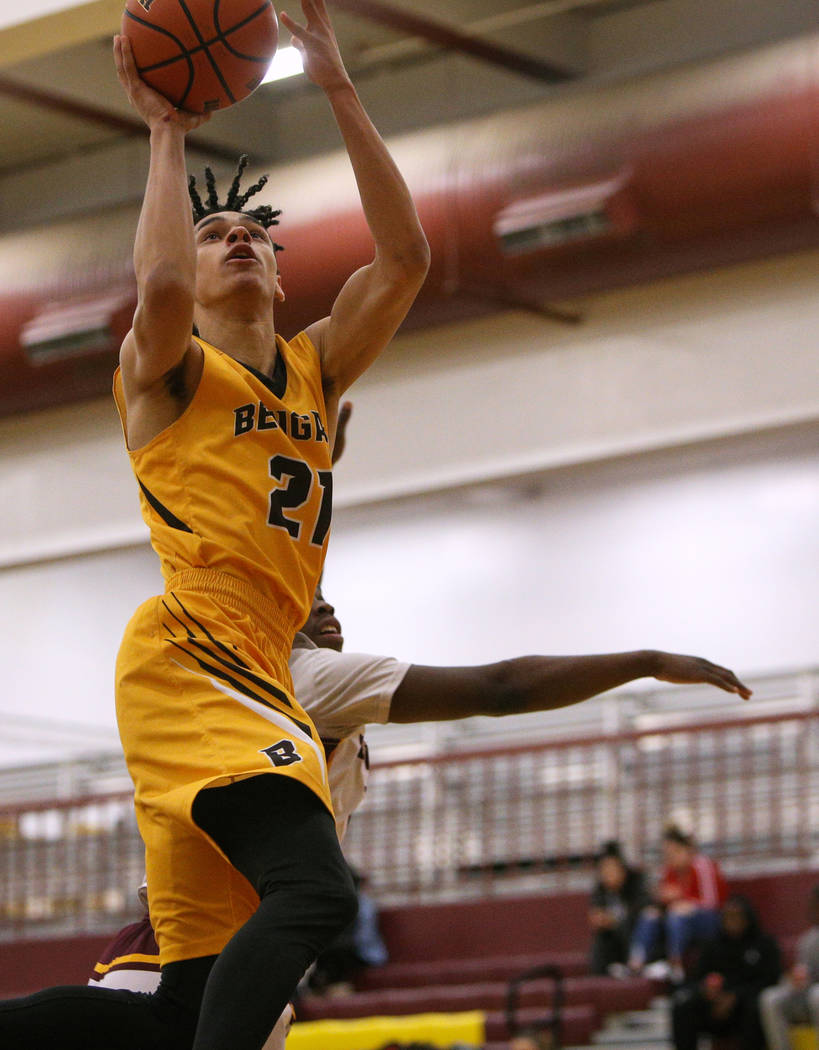 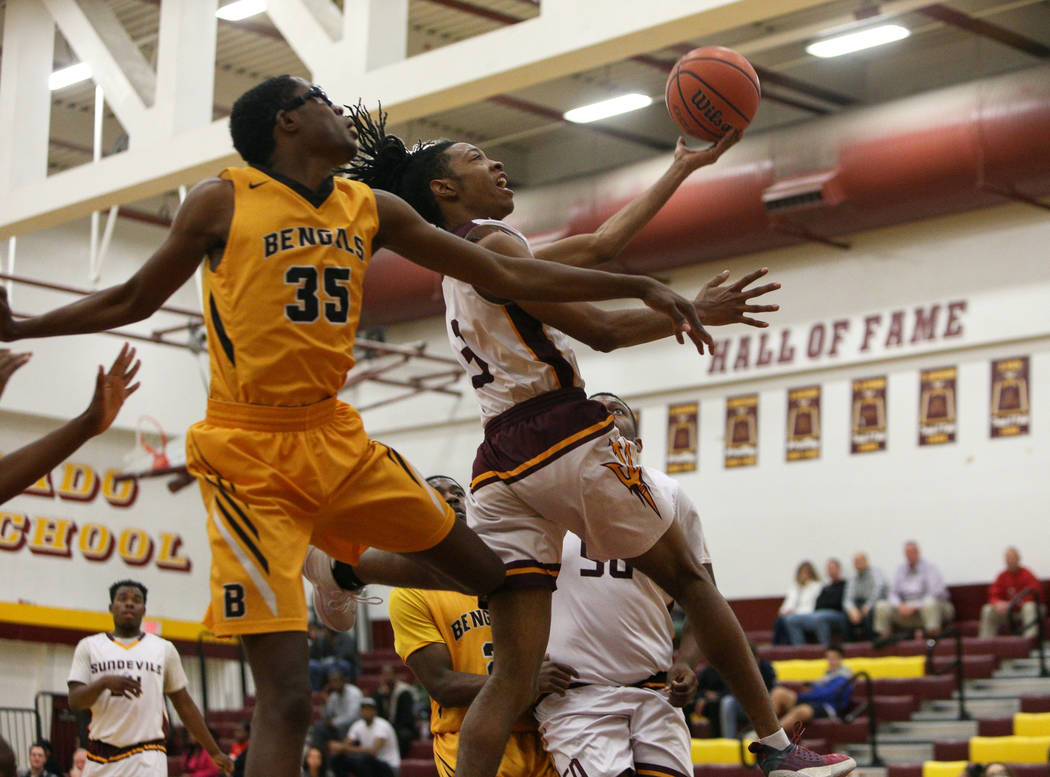 Eldorado’s Jonathan Thomas (3) jumps up to take a shot while being guarded by Bonanza’s Ian White (35) during a game at Eldorado High School in Las Vegas, Monday, Feb. 11, 2019. Caroline Brehman/Las Vegas Review-Journal 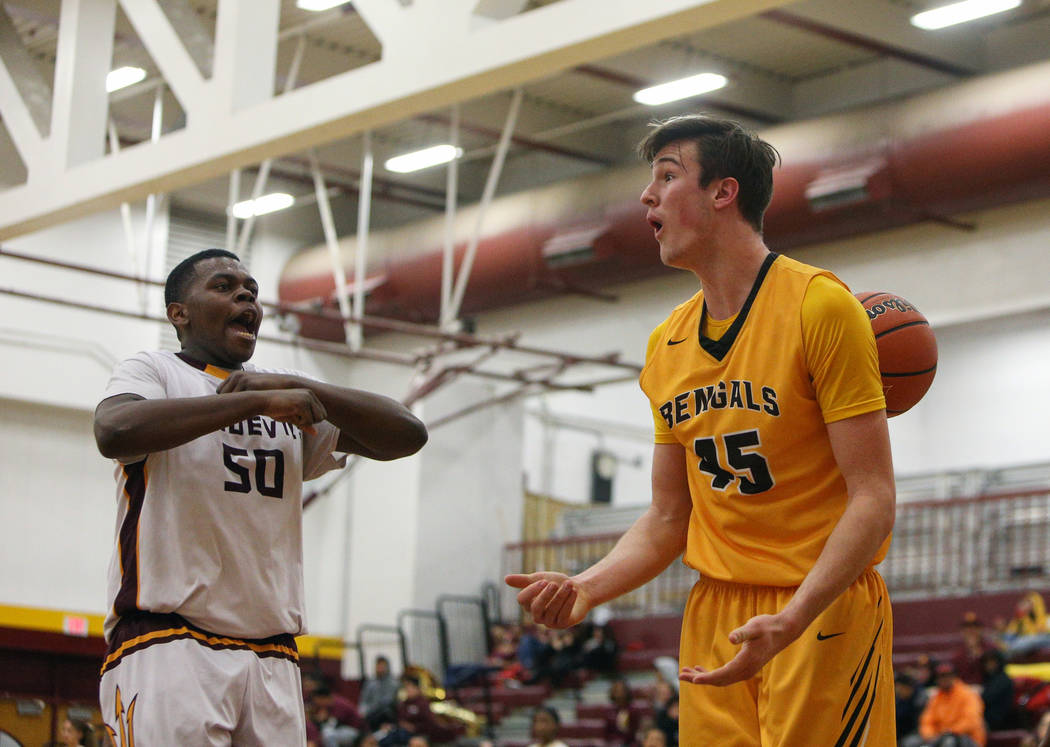 Bonanza’s Kadin Warner (45) looks back at the referee after a call as Eldorado’s Nijerious Mills (50) looks on during a game at Eldorado High School in Las Vegas, Monday, Feb. 11, 2019. Caroline Brehman/Las Vegas Review-Journal 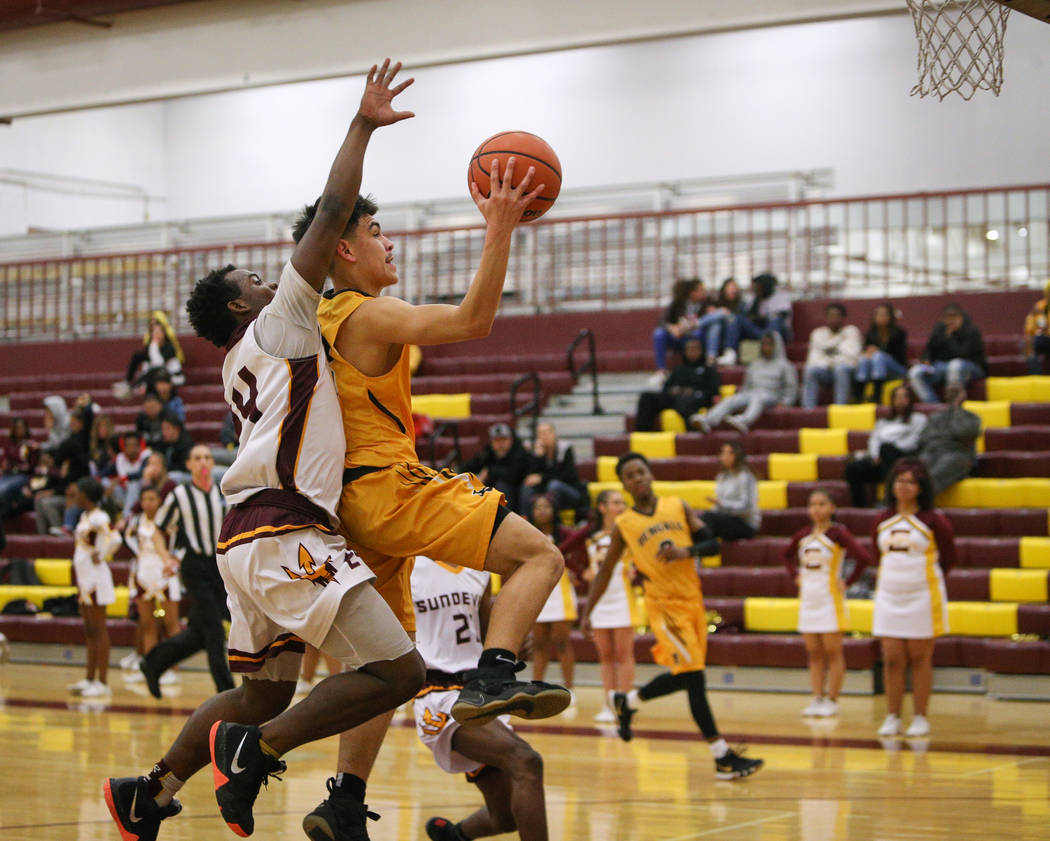 Bonanza’s Nicolas Diaz (33) jumps up to take a shot while being guarded by Eldorado’s Johnny Perry (44) during a game at Eldorado High School in Las Vegas, Monday, Feb. 11, 2019. Caroline Brehman/Las Vegas Review-Journal 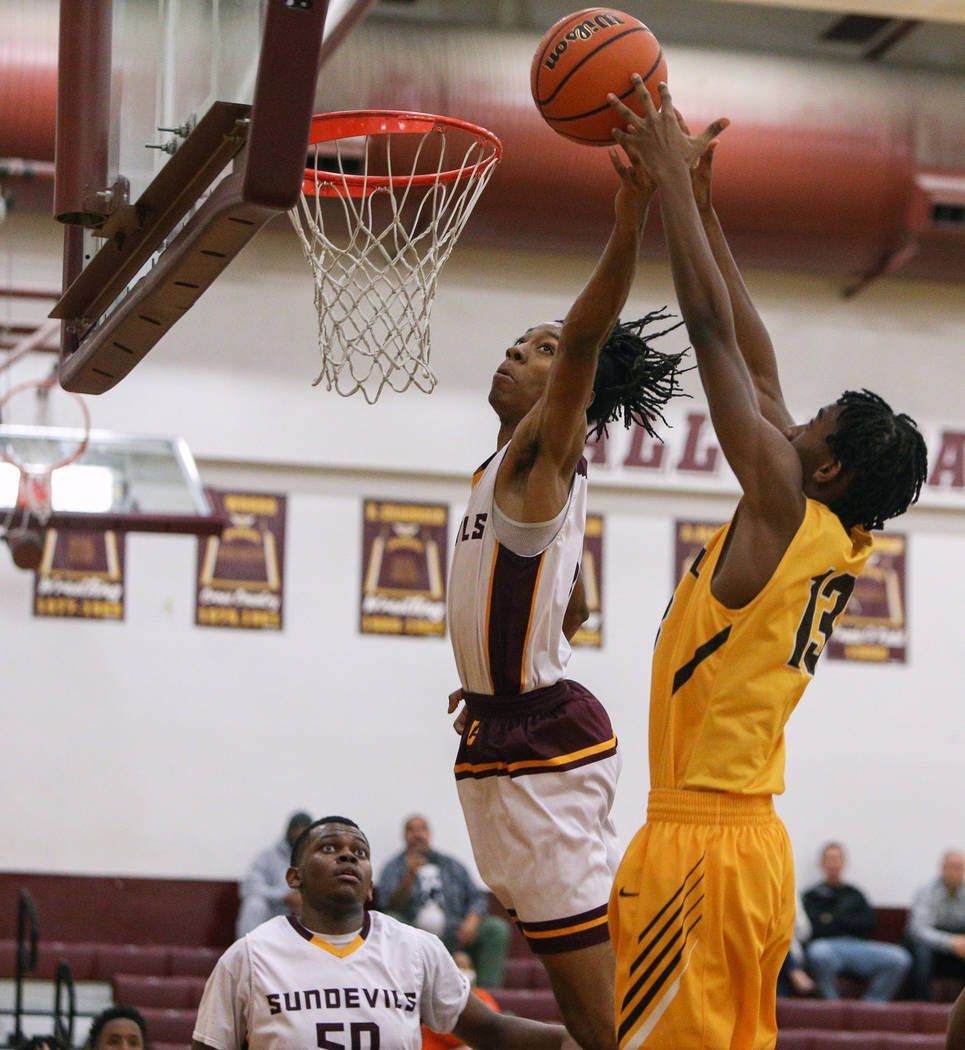 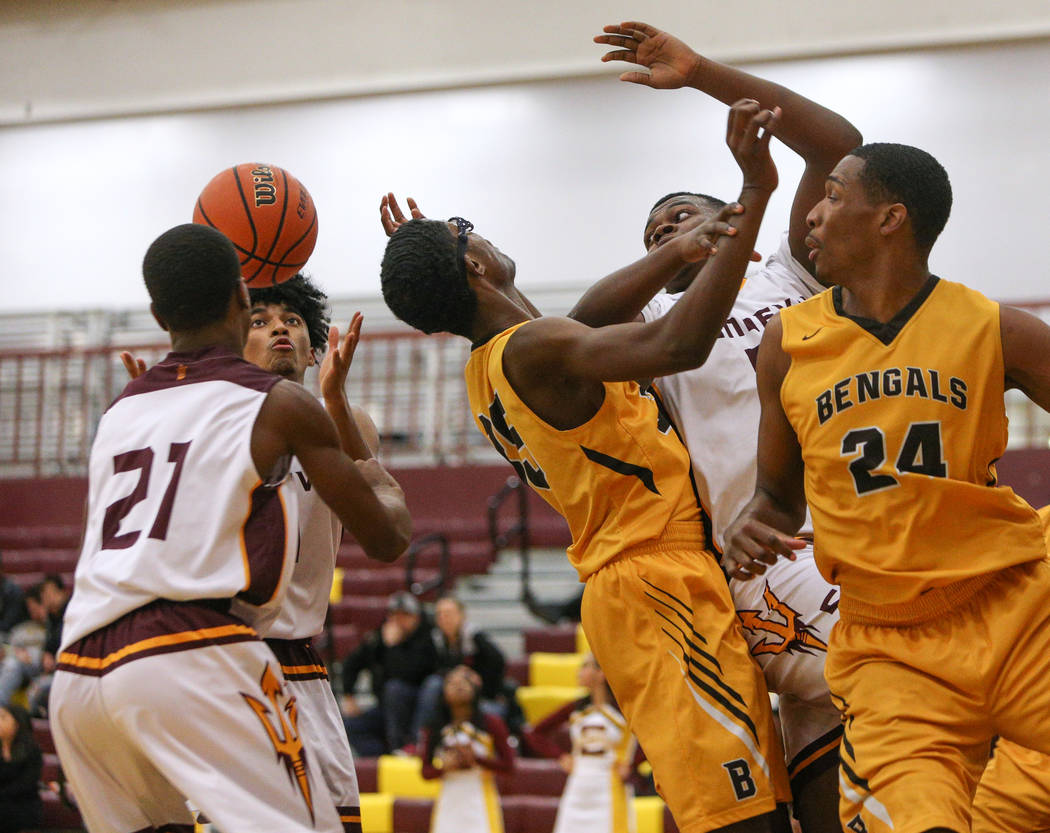 It worked on Monday night.

Eldorado struggled against the Bengals’ 1-3-1 zone, and Bonanza rolled to a 63-45 road win in the opening round of the Mountain Region tournament.

“A lot of people don’t play against that 1-3-1 defense that we have, and it’s kind of like going to the dentist with no Novocain the first time you see it,” Bonanza coach Dan Savage said. “And that was the case in the beginning of the game, is Eldorado struggled finding the open man.”

Kadin Warner, a 6-foot-8-inch senior, had 14 points and 11 rebounds to lead the Bengals, who had a significant height advantage with Warner teaming with 6-6 senior Ian White.

“We definitely took advantage of our posts,” Savage said. “Our guards shared the ball down low in the post, and we got a couple big dunks. Usually, when our big guys finish at the rim it gets our defense really excited.”

White finished with nine points and 11 rebounds and Joseph Brooks scored 12 for Bonanza, which plays at Shadow Ridge (14-11) at 6:30 p.m. on Wednesday.

Eldorado (6-19) got things going to start the second half, forcing eight turnovers in the first five minutes of the third quarter to cut the lead to 40-32. But the Sundevils cooled off again in the fourth quarter and Bonanza pulled away again to win just its second playoff game in the last 11 seasons.

“It’s good for these guys, because they’ve worked hard,” Savage said. “Our record doesn’t really indicate the level of talent that we have. We’ve lost a lot of close games this year. To have 13 wins, we could easily have 18 and be a higher seed.”

Jonathan Thomas and Jalen Malone each had 15 points for Eldorado.

Cimarron-Memorial 71, Rancho 65 — At Cimarron, Brian Lang had 39 points, nine rebounds, eight assists, and four steals as the Spartans edged the Rams in the Mountain Region tournament.

Chance Farnsworth added 16 points for the Trojans, who trailed 32-30 entering the fourth quarter.

Democracy Prep 88, Valley 59 — At Democracy Prep, Najeeb Muhammad had 33 points and 10 rebounds as the Blue Knights rolled past the Vikings.

Mojave 75, Somerset-Losee 43 — At Somerset-Losee, Chris Jackson led four double-figure scorers with 18 points as the Rattlers rolled by the Lions.

Jayden Young and Caevee Cruz each scored 14 points for Somerset-Losee, which got 13 points from Ray’mon Daniels.