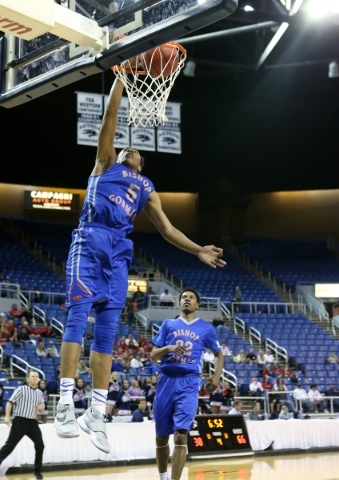 The state basketball tournament is usually perceived as the marquee event in high school sports. In many states, schools from all over converge in a central location to battle for championships.

Alas, no such central location exists in Nevada.

“I keep teasing with people that if we got a serious donor, we’d build us a big arena in Tonopah,” joked Bart Thompson, the executive director of the Nevada Interscholastic Activities Association.

Without an ideal central spot, the state basketball tournament in Nevada has alternated between Reno and Las Vegas since 2005.

And that’s why the 10 Las Vegas-area schools that advanced to championship games had to travel more than 400 miles to Reno last week to play at UNR’s Lawlor Events Center.

“We’re looking for a place, obviously, that has hotel space close enough, and enough ample hotel space for families and teams,” Thompson said. “As well as a venue that can handle the crowd. We’re kind of in the middle where a high school really can’t, but obviously a venue this size, there are a few empty seats. That’s kind of the way it’s going to be.”

Thompson said money is the biggest reason the NIAA alternates between the North and the South.

“It’s mostly economic so that all the schools in the South that make the tournament aren’t bearing the full cost year after year after year, and vice versa for the North, as well,” Thompson said. “And with a great gap between, it’s kind of a fan issue and kind of a fairness issue.”

The state tournament was held in Reno from 1988 to 2004 before returning to Las Vegas in 2005. Part of the reason the tournament left Las Vegas after 1987 was poor attendance.

The 1987 large-school boys state final was between South Tahoe and Valley.

“There were more people from South Tahoe than there were from Valley High School,” Clark County School District executive athletic director Ray Mathis told the Review-Journal in 2004.

All eight of this season’s state finalists in the largest classifications — Division I and I-A — were from the Las Vegas area. That meant there were more than a few empty seats for championship games at Lawlor on Friday and Saturday. But crowds when the tournament has been in Las Vegas have varied widely, as well.

“I’m looking forward to being in Las Vegas next year to see what we get in terms of crowd when we’re down there,” said Thompson, who took over as NIAA director in June. “Obviously, (Friday) night, I was disappointed in the crowd. But we had two Southern schools in both the boys and the girls. I understand that to some extent. I wonder how that would change if we were in the South, how much bigger crowd we would get. I haven’t seen that yet.”

The state tournament is set to return to Las Vegas in 2017, but Thompson said the NIAA does not yet have a site. Orleans Arena has hosted the state tournament the last six times it was in Las Vegas, but that may not be the case next year. That’s because The Orleans is owned by Boyd Gaming Corp., and Station Casinos Inc. is the title sponsor for NIAA state tournament events.

“We’re still looking,” Thompson said. “With Station Casinos being our title sponsor, and they are a very generous sponsor to the association, we need to give them credit for that. They’re very happy to hang their signs up in a Boyd Gaming facility, but the Boyd Gaming facilities are not as excited about that. So that becomes a little bit of an issue with The Orleans. We have several places in mind, and that’s what starts next week, finding where we’re going to be.”

“Quite honestly, it’s tough to get arenas in Las Vegas this time of year,” Thompson said. “So wrestling and basketball, we’re struggling a little bit to find a place when we’re in the South.”

Thompson said he’s open to discussion about possibly changing the current tournament rotation or finding a permanent site for the basketball tournament. He said discussions about how to accommodate the schools from both ends of the state are always important.

“As I come into the state maybe with some fresh eyes a little bit that doesn’t have a dog in the fight North or South … maybe we’ve got the best we can have,” Thompson said. “And over the years, I don’t doubt that that’s possibly the case. But at least we can look at it a little bit new, and it’s going to be a topic of discussion as long as I’m here. That’s if I’m here for 30 years, it’s probably going to be a topic of discussion.”