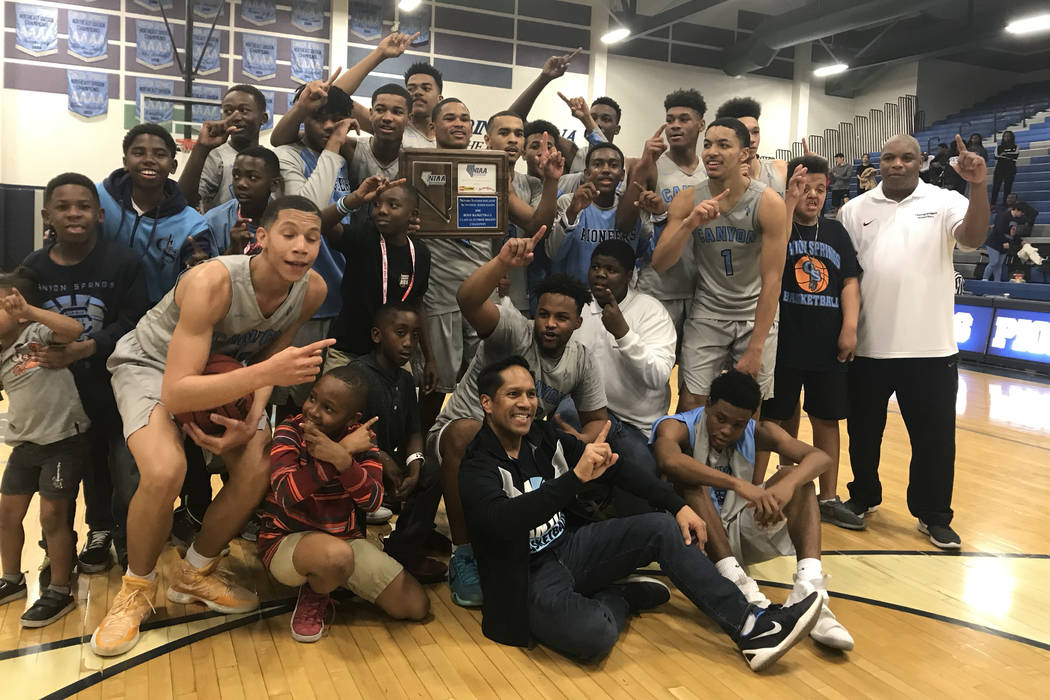 Canyon Springs boys basketball coach Freddie Banks told his players before the Class 4A Sunrise Region championship against Coronado that he planned on attending the state playoffs in Reno — with or without them.

Of course, he wanted their company.

So they made sure to earn the right to join him.

The Pioneers squandered a 16-point lead, but held off the Cougars and their comeback to clinch a 101-89 home victory on Saturday night, the region championship and a berth in Reno to play for the Class 4A state title.

Banks, stoic throughout the game, cracked a euphoric smile as his players celebrated their accomplishment.

“It was time to go (to Reno) again,” Banks said. “I told them I was going. They said ‘We’re going too coach.’ We’re going now to the (champion)ship.”

Canyon Springs set the tempo in the first half by pushing the ball after both makes and misses to build a 43-38 halftime lead.

The Pioneers face-guarded Coronado freshman phenom Jaden Hardy, slowed the Cougars when he couldn’t score and led by double figures for most of the third quarter.

“That was the game plan, make him work from one end of the court to the other end,” Banks said. “Keep your hands up, and when he shoots, contest the shot … We just tried to contain him. Once we contain him, everyone else we can guard.”

But three Canyon Springs’ technical fouls empowered Coronado, which trimmed the lead and tied the game at 85 on Hardy’s fifth and final 3-pointer with 2:18 to play.

Alexander Spaight responded with a layup, though, and Kayvon Alexander grabbed a pair of key offensive rebounds to extend the Pioneers’ ensuing possession.

Hardy fouled out, Spaight made seven free throws and the Pioneers partied like it was 1999.

“Everybody doubted us,” said Legardy, who recevied his Northeast League MVP plaque after the game. “We’re going to state … I just don’t know what to say. I’m speechless right now.”

Hardy finished with a game-high 32 points on 9 of 22 shooting. Senior guard Patrick Simms added 18 points for Coronado, and senior forward Taieem Comeaux had 17 points and 11 rebounds.

“We believed in each other,” Legardy said. “We knew how good we were this year … Everybody that doubted us is going to be coming to state.”