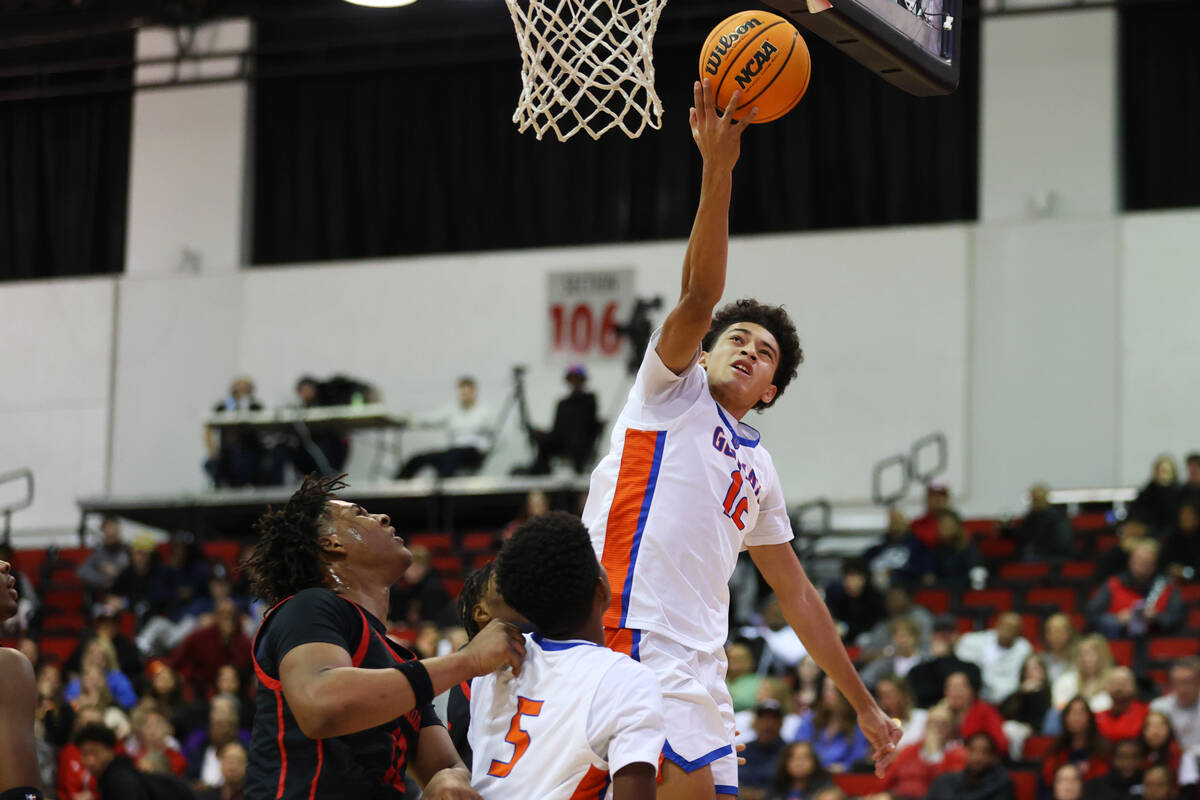 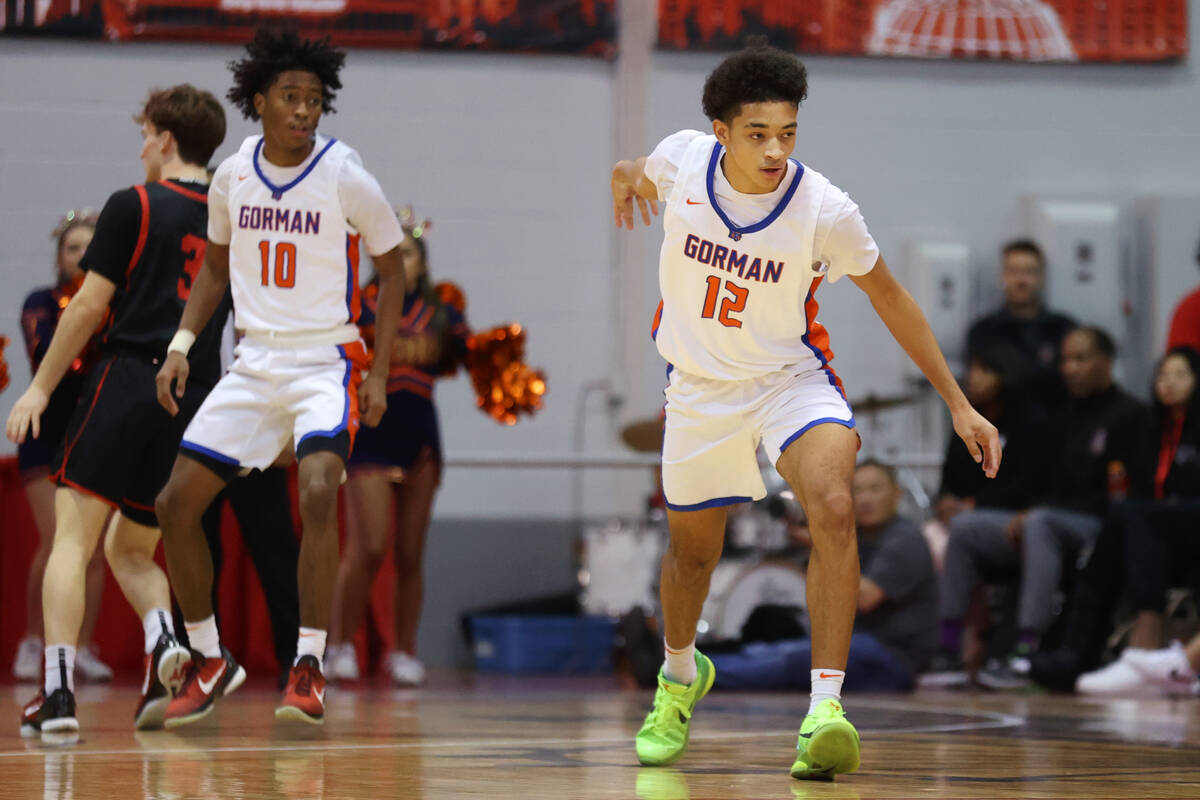 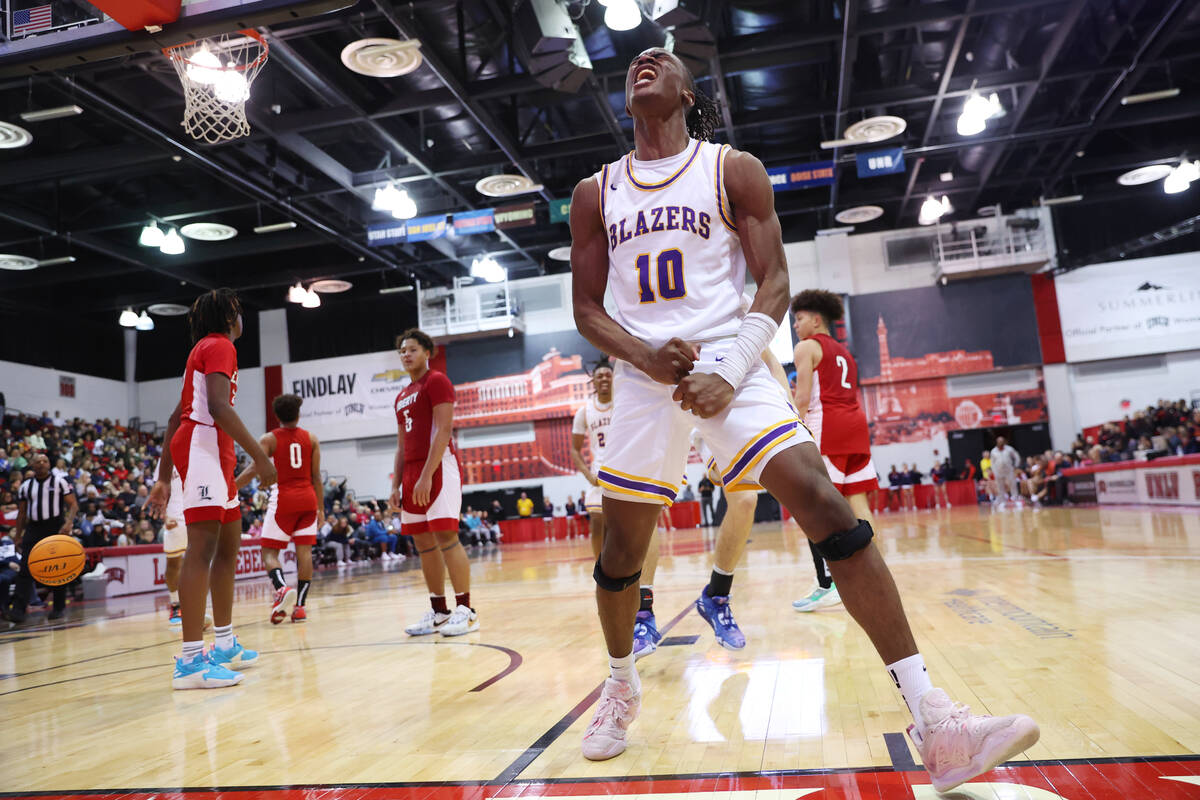 The Gaels were down early and without their top two guards — Jase Richardson, who suffered an ankle injury in the third quarter, and John Mobley, who fouled out in the fourth.

Needing a spark, the Gaels’ depth shined with junior forward Quentin Rhymes scoring 15 points off the bench and freshman wing Jaxon Richardson’s dunk in the final seconds proving to be the game-winning basket.

The results of the potential future playoff matchups showed that the race for the 5A state championship is up for grabs. After Saturday’s games, Bishop Gorman, Durango, Liberty and Coronado have each shown that they are title contenders.

“It’s all up in the air,” Rice said. “None of us have pulled away from each other this year. The rest of the league play is going to be interesting, and the playoffs should be really good.”

It’s not just Saturday’s results that show how close the race is. Liberty outlasted Coronado 72-67 in overtime Thursday. The Cougars had beaten the Patriots 58-55 at the buzzer in the Tarkanian Classic last month.

Durango (11-3, 6-0 5A Southern League) was in a similar situation. The Trailblazers lost to Liberty (11-7, 3-1) in last year’s 5A Southern Region semifinals and at the Tarkanian Classic. Saturday looked like it was going to be another similar result with the Patriots leading 44-32 in the third quarter.

But the Trailblazers went on a late 15-0 run and kept the Patriots’ offense in check to avenge their earlier loss. Coach Chad Beeten said the way his team finished the game is a big boost.

Gorman (13-5, 4-0) hosts Liberty on Wednesday in a rematch of last year’s state title game. With three weeks left in the regular season, Rice said Saturday was evidence that any of the four teams could win the title.

“They can all beat each other on any given night,” Rice said. “There’s other good teams as well, but those four can go back and forth, and that’s what happened (Saturday). … It’s very even.”

Durango still has to play Gorman on the road Feb. 3 and hosts Coronado (10-8, 2-2) on Feb. 9. While Beeten said beating Liberty was a good win, he also emphasized the importance of the Trailblazers winning their next games against the other state title hopefuls.

“Now, we can control our own destiny. That’s the most important thing,” Beeten said. “It’s one game in many that we have to win, and if we don’t win the next one, this one doesn’t matter.”

If there is one clear-cut favorite after Saturday it appears to be reigning 4A boys state champion Mojave. In a rematch of last year’s state title game, on the same court, the Rattlers easily put away Spring Valley 74-38 with a running clock.

Mojave (13-5, 3-0 Class 4A Lake League) plays Las Vegas (12-7, 3-0) on Monday. The winner will have an advantage in the league title race, with the division winner getting a bye to the state quarterfinals.

“There’s always a chance if you give yourself a chance,” Mojave coach KeJuan Clark said. “We’re just looking to make another statement. We want to be there to play defense, to dominate on defense again, and let it fall where it may. That’s the plan.”

Clark said the Rattlers wanted to make a statement Saturday, not just to the rest of league that they are still the team to beat in 4A, but also because they were left off the Big City Showdown event flyer.