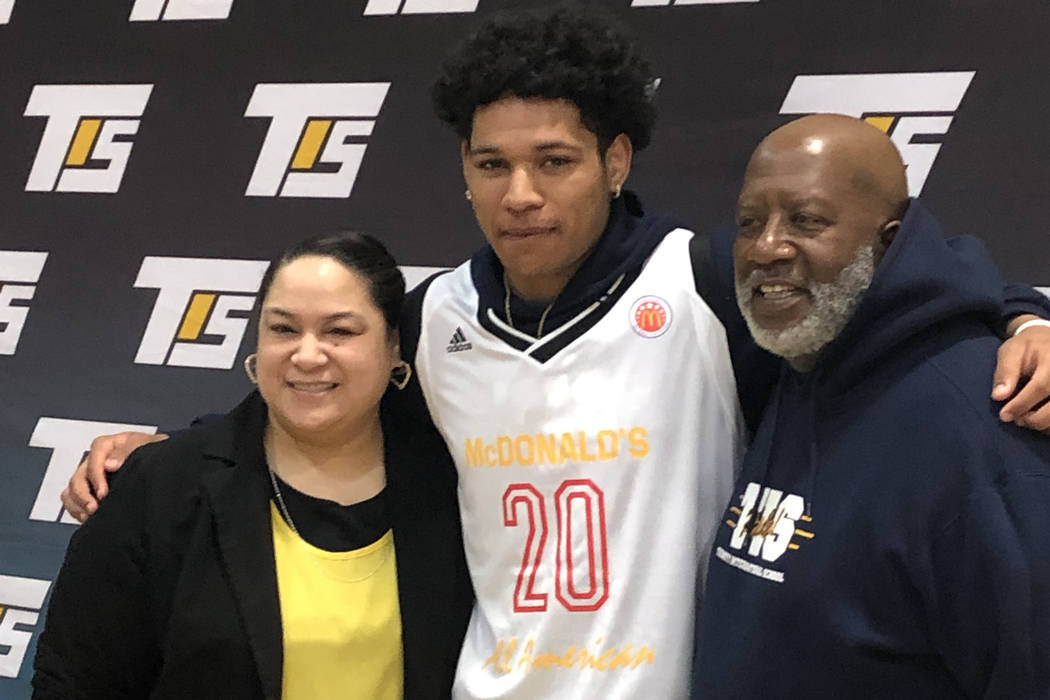 Trinity International Schools point guard Daishen Nix poses with his mother Mina Nix and coach Greg Lockridge after being presented with a jersey commemorating his selection as a McDonald's All-American on Monday, Feb. 24, 2020.

That’s when the Trinity International School point guard was presented with a jersey commemorating his selection as a McDonald’s All American.

Nix was one of 48 players in the country — 24 boys and 24 girls — who earned that distinction in January, and he’ll play in the game April 1 at the Toyota Center in Houston.

“I’m excited right now, overwhelmed, nervous,” Nix said. “The four years of being here and being coached by coach (Greg Lockridge) has paid off, and being in Vegas and at this school.”

Lockridge said he’s also somewhat overwhelmed by seeing Nix receive this honor, despite the fact his talent has always been obvious.

When Nix was 14, Lockridge received a video of him playing in Alaska, which was sent to him by Mina Nix, Daishen’s mother, and his AAU coach.

“I looked at it for two minutes, and my heart started beating really fast,” Lockridge said.

Daishen, who was last year’s national Christian school player of the year, has career totals of 3,228 points, 1,119 assists and 1,1170 rebounds, all of which are school records.

Mina Nix said she visited Las Vegas after Daishen’s seventh-grade year and decided they were leaving Alaska. Daishen was apprehensive at first, but Mina’s plan to give her son better basketball opportunities has paid off.

“As a parent, it’s like, ‘OK, we’re going to go play basketball.’ I’ve got to find the right coach, and I did, and it’s taken him on a platform I’ve never thought he’d be on,” Mina said.