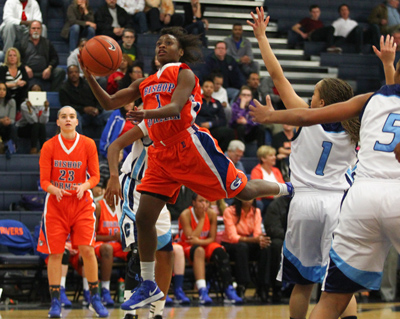 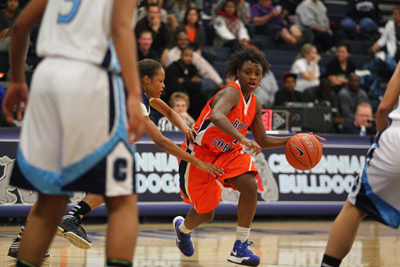 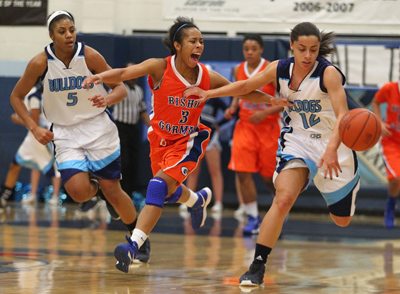 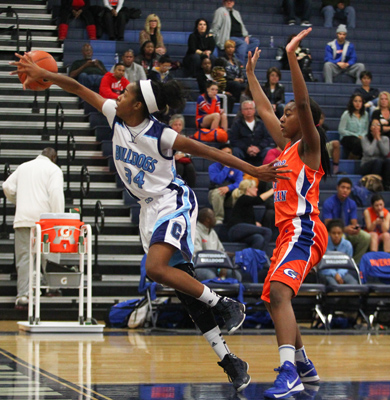 Centennial’s Breanna Workman reaches to save the ball against Bishop Gorman during a game at Centennial High School in Las Vegas on Tuesday, Jan. 22, 2013. (Chase Stevens/Las Vegas Review-Journal) 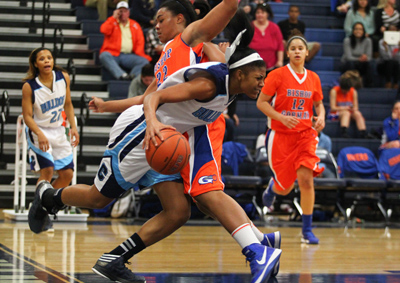 The same was true for her Bishop Gorman girls basketball teammates.

The senior guard changed all of that Tuesday, pouring in 22 points and helping the No. 3 Gaels pull out a 60-59 road win against the top-ranked Bulldogs in a Southwest League game.

“She made things happen tonight,” Gorman coach Sheryl Krmpotich said. “You expect that from your seniors. That was a great effort when we needed her to step up.”

Childress scored five points in a 76-59 loss to Centennial in last year’s Sunset Region final and didn’t score when Centennial routed the Gaels 82-50 for the Sunset crown two years ago.

But with the Bulldogs focused on stopping classmate April Rivers, Childress grabbed the ball and the spotlight, constantly slashing into the paint.

Centennial (19-3, 4-1) called a pair of timeouts with 10 seconds left, but managed only a 23-foot shot by Tramina Jordan that hit the rim and ricocheted away with one second left.

Childress, who played 30:31 of the 32 minutes in a physical game, scored 14 of her points after halftime to help the Gaels erase a 31-23 deficit and hand Centennial just its second loss in its last 64 games against Nevada teams.

“We knew they were going to key on April,” Krmpotich said. “We have a lot of weapons. You can’t just key on one person.”

Rivers added 13 points, including a four-point play that tied the score at 56 with 3 minutes to play.

Freshman Raychel Stanley had 13 points and 12 rebounds for Gorman, which overcame 19 turnovers and beat Centennial for the first time since the 2010 Sunset Region final.

“She’s a stud,” Krmpotich said. “She’s a monster. She’s a beast. She doesn’t realize how talented she is. She’s just a freshman, and she’s a dominant post player.”

Jordan paced Centennial with 16 points, and Breanna Workman scored 14, including a 10-for-12 effort from the free-throw line. Jada Brown had 11 rebounds for Centennial.