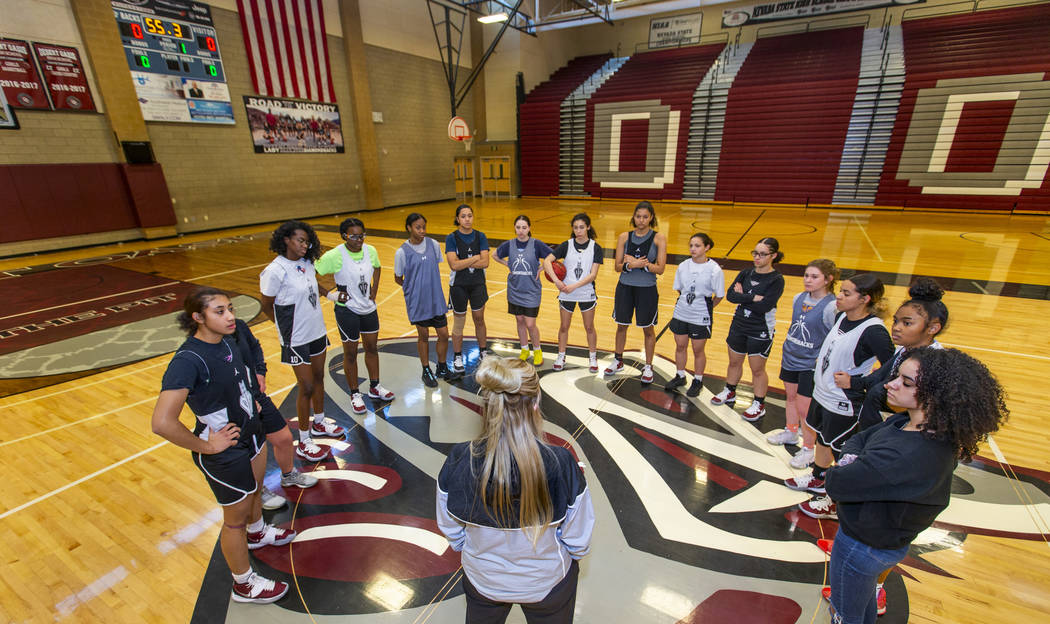 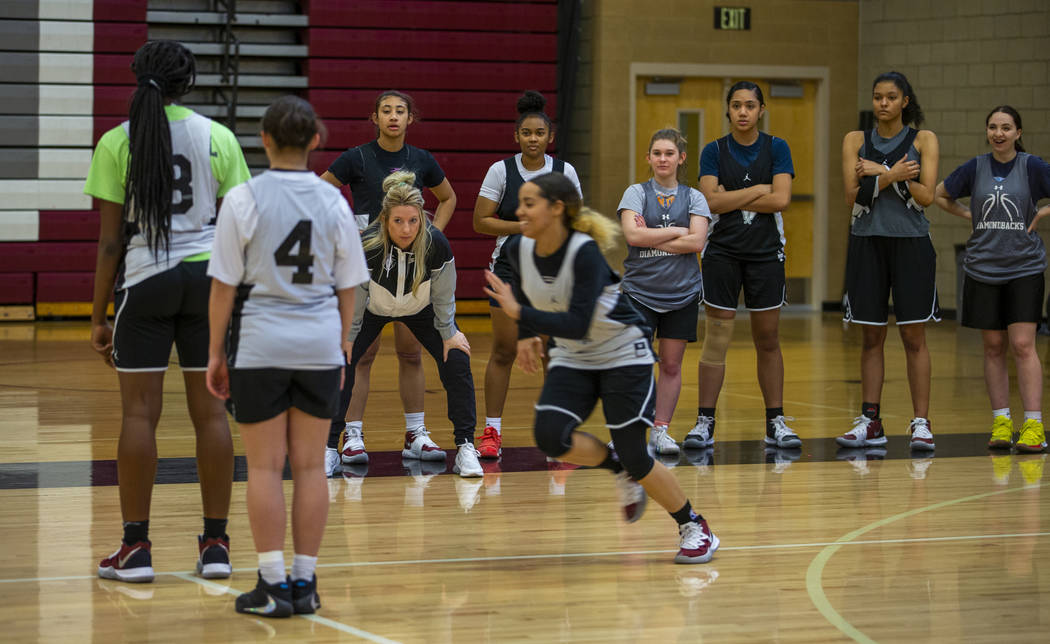 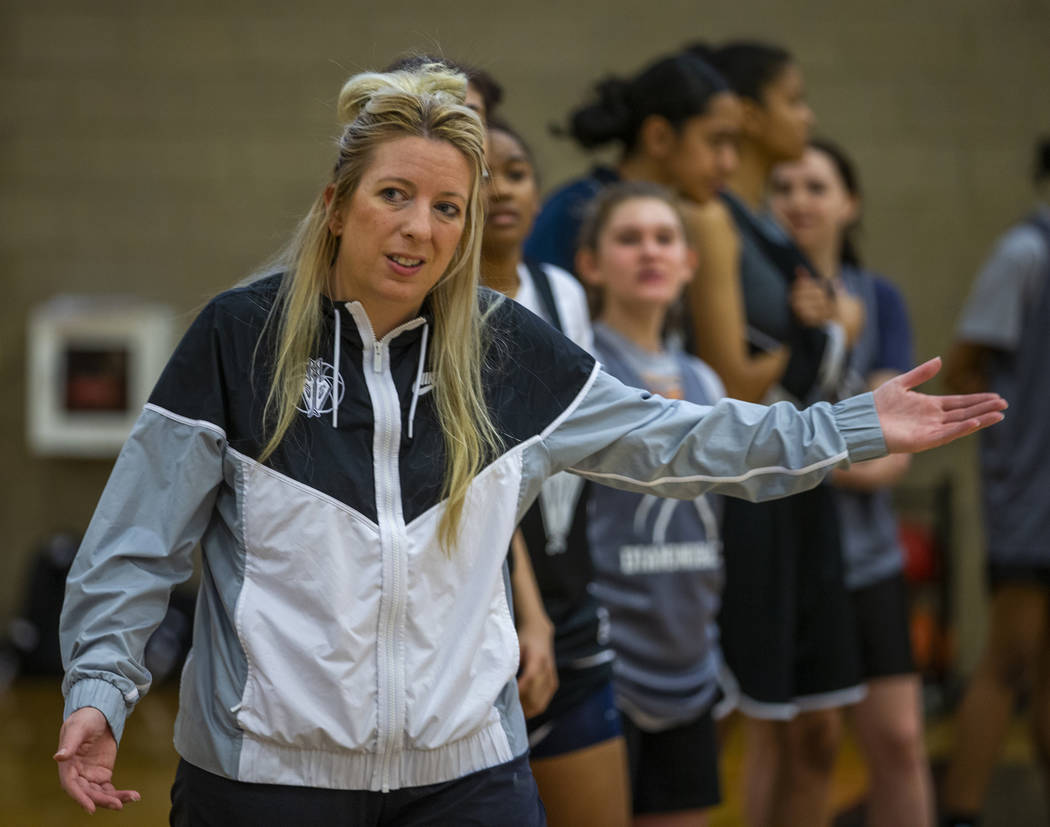 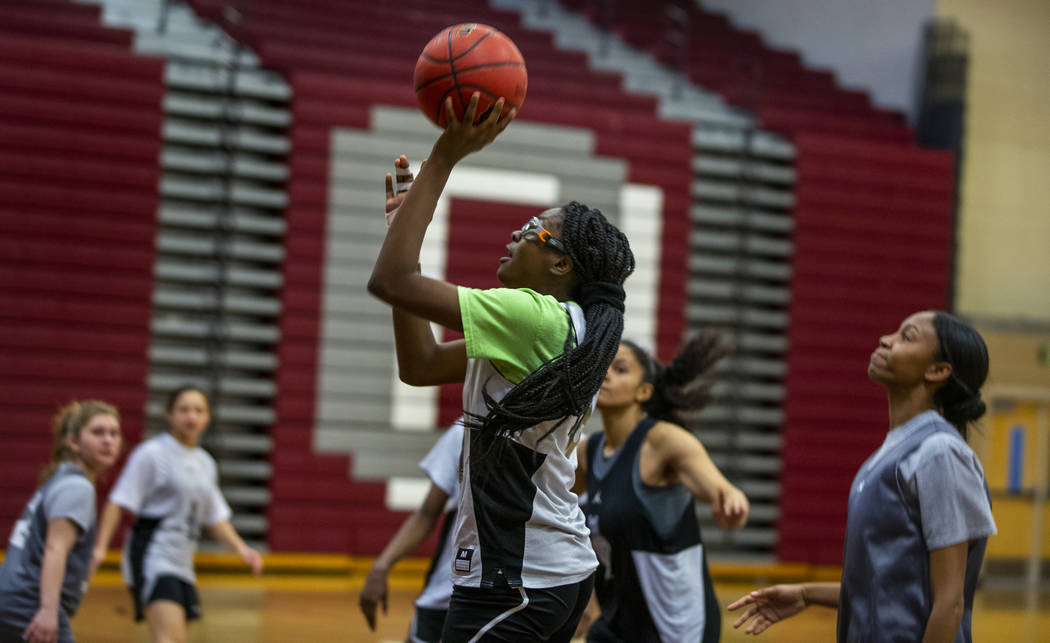 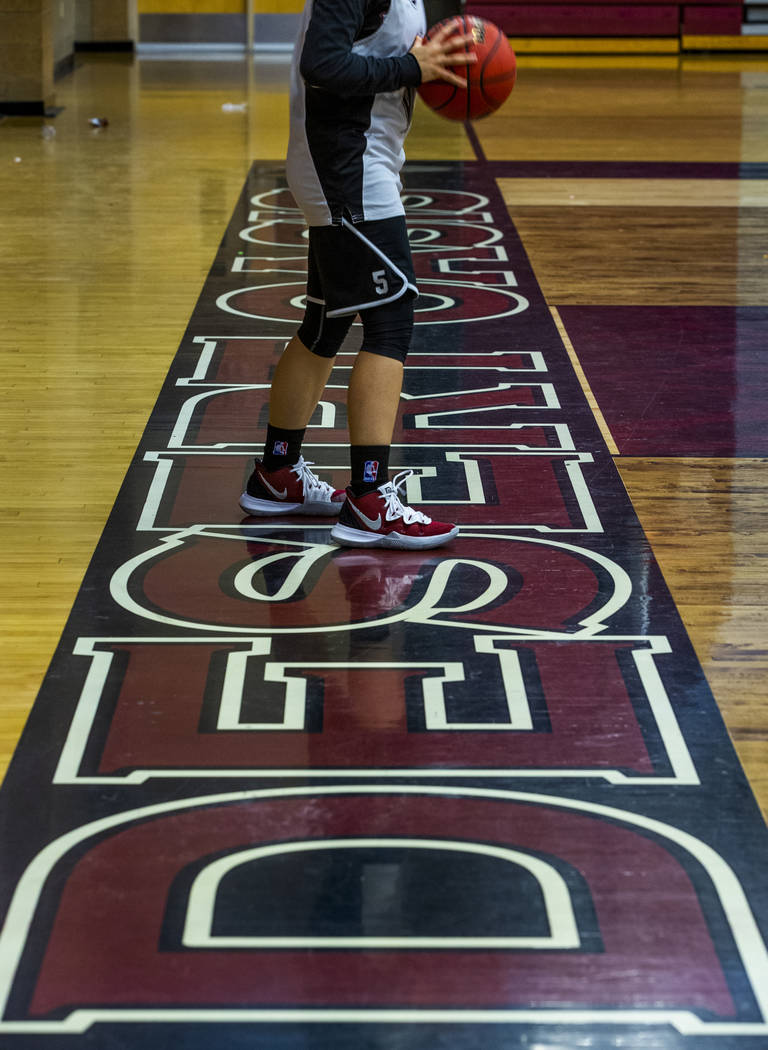 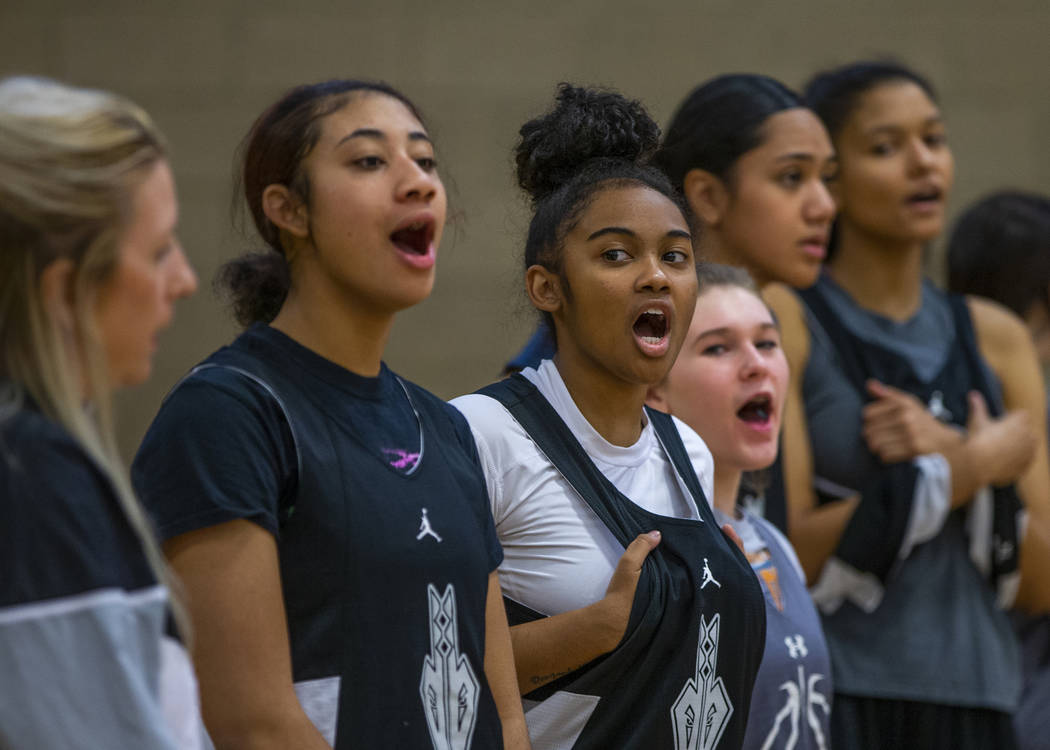 Desert Oasis girl's basketball team players yell out the next play to those on court during practice under head coach Laurie Evans on Monday, Feb. 24, 2020, in Las Vegas. (L.E. Baskow/Las Vegas Review-Journal) @Left_Eye_Images 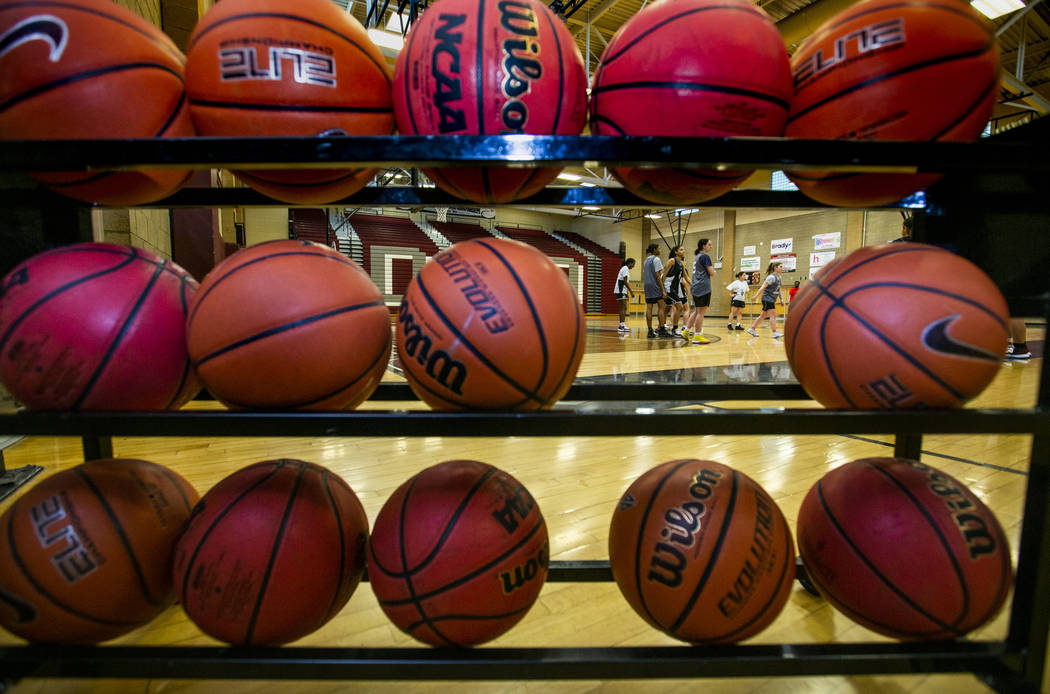 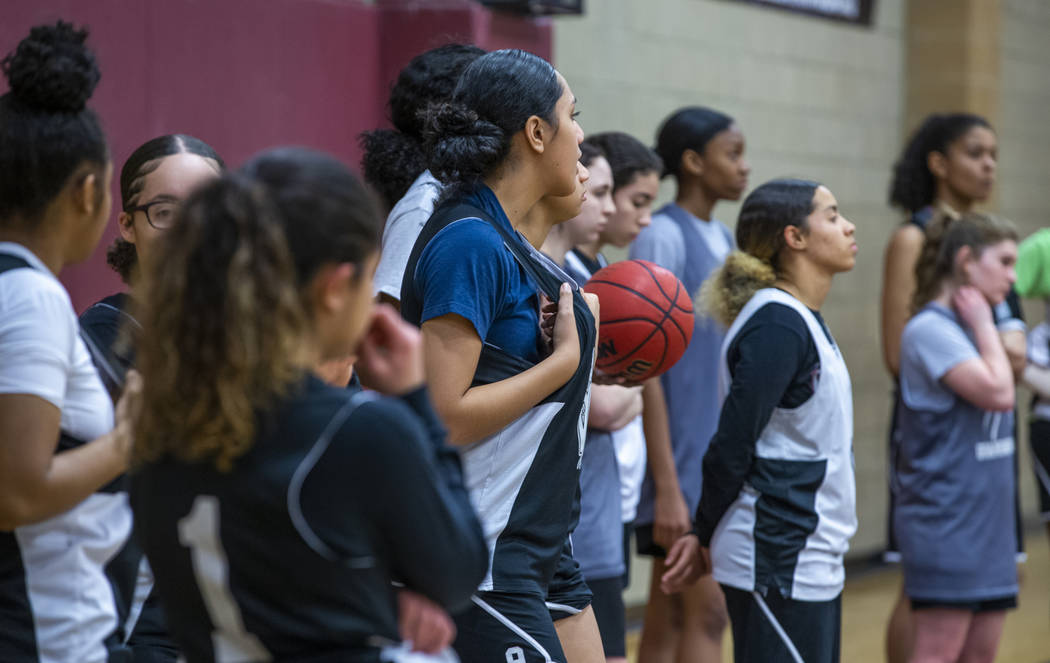 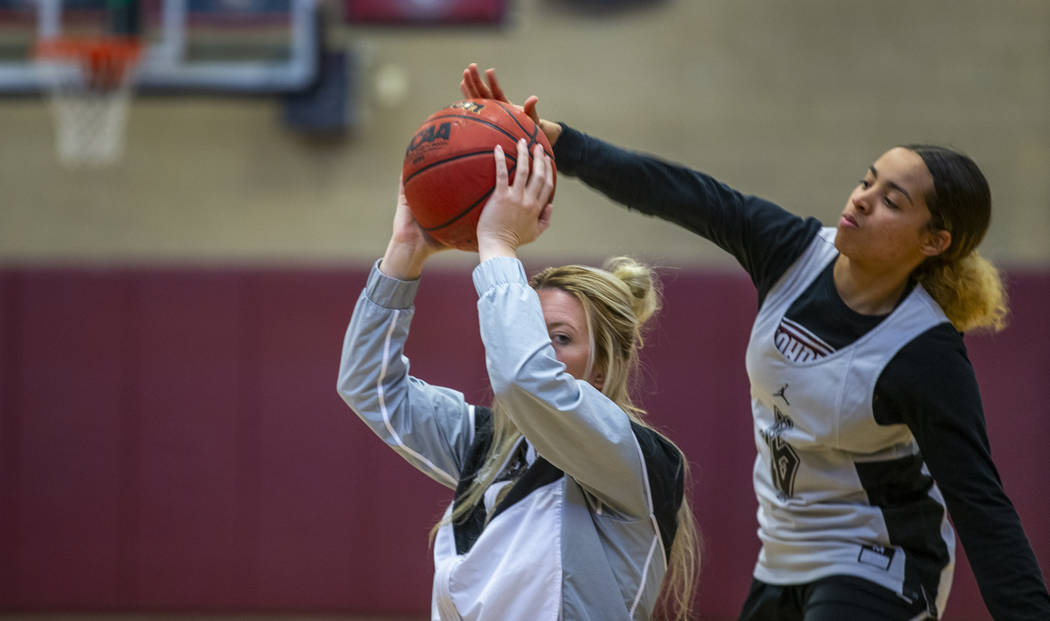 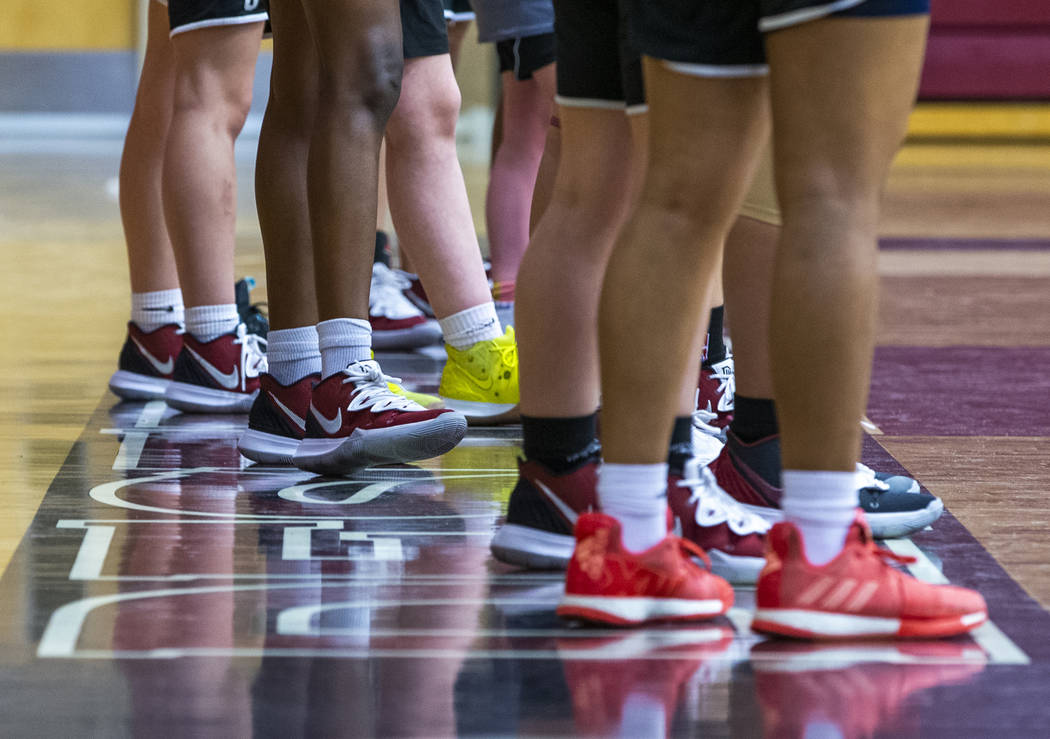 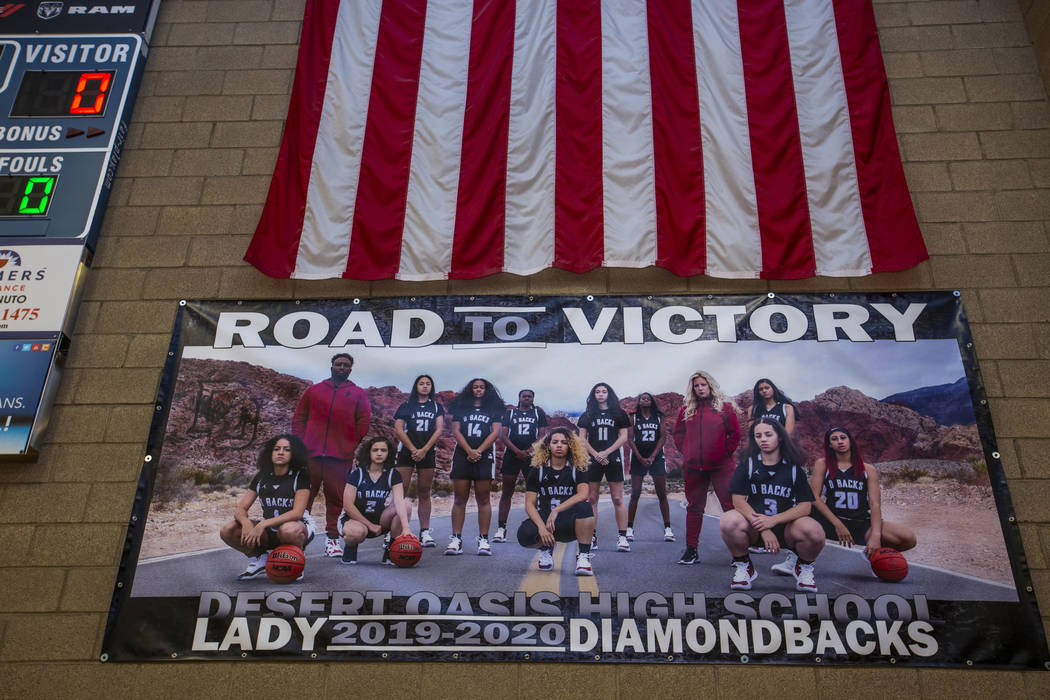 A banner hanging in the gym features the players and coaches of the Desert Oasis girl's basketball team on Monday, Feb. 24, 2020, in Las Vegas. (L.E. Baskow/Las Vegas Review-Journal) @Left_Eye_Images 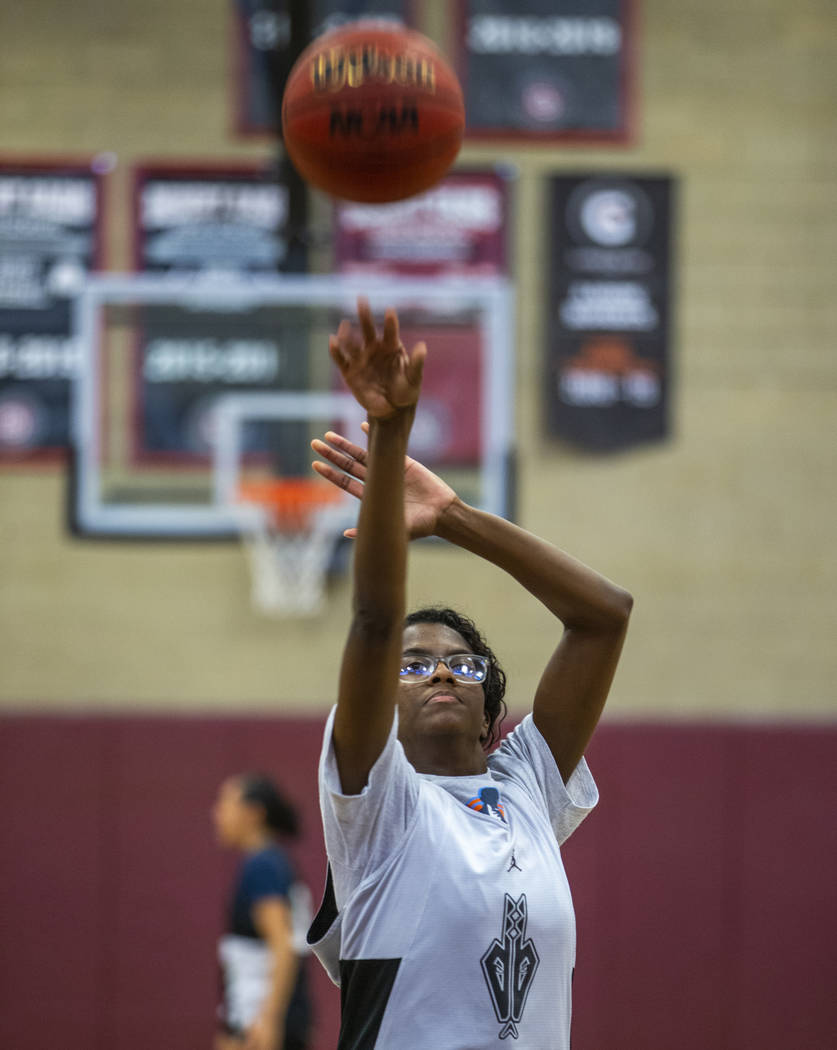 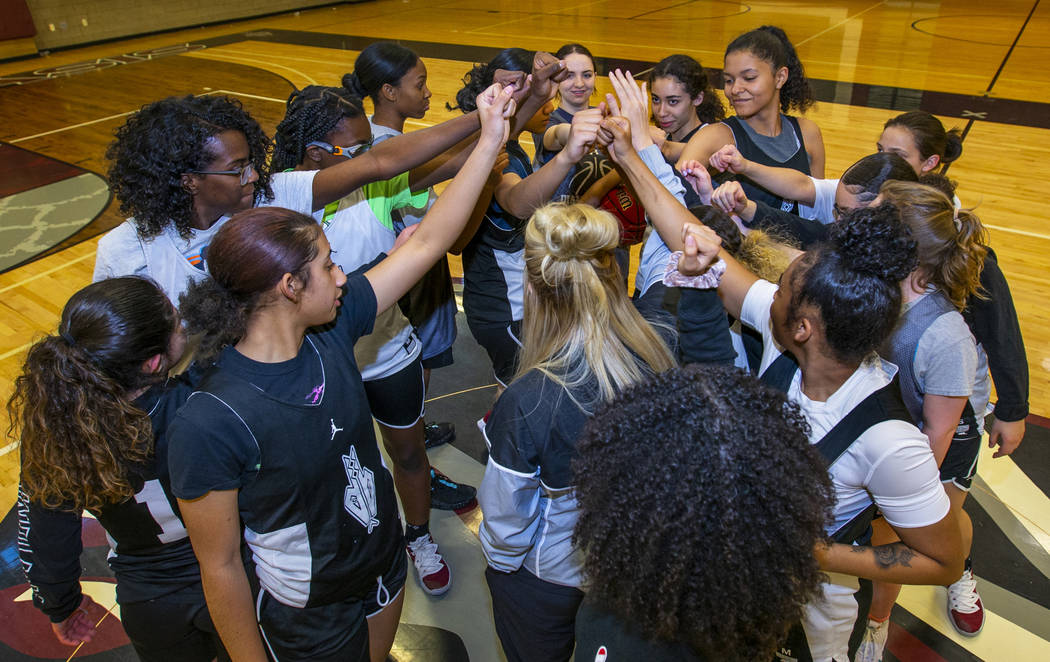 There’s no greater teacher than experience, and the Desert Oasis girls went through the highs and lows the state basketball tournament offered last year.

The Diamondbacks dominated Reno in the quarterfinals, then had a 19-point lead against Centennial after the first quarter of their semifinal tilt. But they watched how quickly fortunes can turn, as the Bulldogs roared back in the final three quarters for a 79-48 win on their way to a fifth straight state championship.

“We learned we have to play a full game and not get big-headed after a couple of minutes,” Desert Oasis guard Eliyjah Pricebrooks said. “We just have to play a whole strong game.”

The Diamondbacks hope they can play two strong games and lift the Class 4A championship trophy Friday night in Reno. First, they’ll have to get past North champion Spanish Springs in a semifinal that will tip at 6:30 p.m. Thursday at Lawlor Events Center.

Desert Oasis secured a place in the state semifinals by virtue of winning the Desert Region title, its first in school history, on its home floor last Thursday.

In the midst of the excitement after that win, coach Laurie Evans had another emotion — relief. While a loss in the Desert Region championship game wouldn’t have ended the Diamondbacks’ season, Evans wasn’t sure what kind of effort her banged-up team could have given in a state tournament first-round game the next day.

“It was really cool for the school to hang another banner and for us to get that (championship) recognition, but it was more important for us to get a week’s rest,” Evans said. “Even two days after we played, we felt better. There’s no doubt in three days we’re going to be good to go.”

It was Spring Valley that had to play that first-round game, and it held off a late charge from Faith Lutheran on Friday to advance. The Grizzlies meet Bishop Manogue in the quarterfinals at 6:15 p.m. Wednesday for the right to face Centennial, which cruised to the Mountain Region championship, in the semifinals at 3 p.m. Thursday. Both of those games will be played at Lawlor Events Center.

Desert Oasis knows well the difficulty of what it’s trying to accomplish, but it’s not spending the week worrying about anybody else. It’s focusing on playing its game.

“What we’re doing is understanding we have all the tools, no matter who we’re playing,” Evans said. “We’ve proven that with only having two losses this year. We’re trying to improve our game and work a little situational stuff we know about other teams. But if we’re perfect in our game, we know we can beat anybody.”

Pricebrooks and center Desi-Rae Young are the Diamondbacks’ only two seniors, but they’ve been a perfect leadership duo. Young is the vocal one, while Pricebrooks is the leader by example. Evans said they’re “kind of like a John Stockton-Karl Malone-type partnership.”

It also helps that they’re both Division I-caliber players, with Young headed to UNLV and Pricebrooks signed with Texas A&M-Corpus Christi. With Young and Pricebrooks leading the way, the team’s atmosphere has changed this year.

“Everyone gets along. We don’t have attitudes toward each other, and we all listen to coach,” Young said. “Last year we all had attitudes. We didn’t listen. We just wanted to play. We still just want to play, but we listen more.”

Even with the two seniors at the helm, it’s a young team. In the Desert Region title game, a 67-55 decision over Spring Valley, its leading scorers were sophomores Olivia Bigger with 16 points and Isabella Jaramillo with 13. Two days prior, junior Jordyn Stroud scored 23 points to lead Desert Oasis past Bishop Gorman 64-44.

Jaramillo was one of the banged-up Diamondbacks. She went down in the final minutes of their win over Spring Valley with an ankle injury. But she said she and her teammates are all coming along well.

“We want everybody to be 100 percent, and we support each other 100 percent,” Jaramillo said. “Even when we do get injured, we’ve got everybody checking up on each other. I think we’ll be ready to go.”