If you are having problems accessing today’s e-Edition, please click on this link VIEW E-EDITION
By BARTT DAVIS LAS VEGAS REVIEW-JOURNAL
February 20, 2013 - 8:02 pm 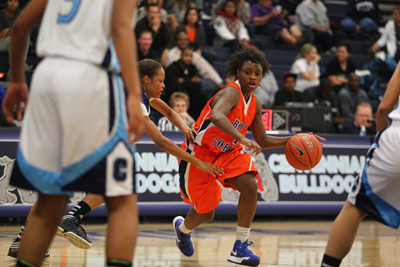 Bishop Gorman girls basketball coach Sheryl Krmpotich doesn’t usually have to worry about her team getting jitters at the state tournament.

Year after year, the Gaels took a tournament-tested squad to the state’s showcase event.

But this year is different.

Two years removed from its last state tournament game, Gorman will hit the floor at Orleans Arena at 3 p.m. Thursday with only three players who have competed in a state semifinal.

“Sometimes young kids don’t realize the magnitude of the game, and that’s what we like,” said Krmpotich, who has two seniors and one junior on a nine-player roster that includes five freshmen.

“We just want to play our game and do what we have to do.”

The Gaels, who will make their 14th state tournament appearance in the past 17 years, will rely heavily on senior guards April Rivers and Tonishia Childress, both members of Gorman’s last state title team in 2010.

“They’ve been there, they’ve won it,” Krmpotich said. “They know what it takes, and that’s key. Our leadership is key.”

Gorman starts two freshmen — Raychel Stanley and Megan Jacobs — and both are capable of scoring in double figures. Stanley also gives Gorman a solid low-post presence.
Madison Washington, another freshman, generally is the first player off the bench.

The Gaels took a major hit before the start of the season when three players, including UNLV signee Diamond Major, left the program to go to Quest Prep, a first-year program that is not a member of the Nevada Interscholastic Activities Association.

“When we lost those three kids, I think everybody thought we were going to be horrible,” Krmpotich said. “The only way you go is up with youth. These kids and the staff worked tirelessly. We have nine players, and at times we only play seven or eight, so they get valuable minutes.

“You never want to lose kids, but we have the kids who want to be here. We’re like ‘Hoosiers’. We’ve got nine who just want to play. The stage really doesn’t matter. It’s how we play the game.”