If you are having problems accessing today’s e-Edition, please click on this link VIEW E-EDITION
By DAVID SCHOEN LAS VEGAS REVIEW-JOURNAL
December 30, 2016 - 11:47 pm 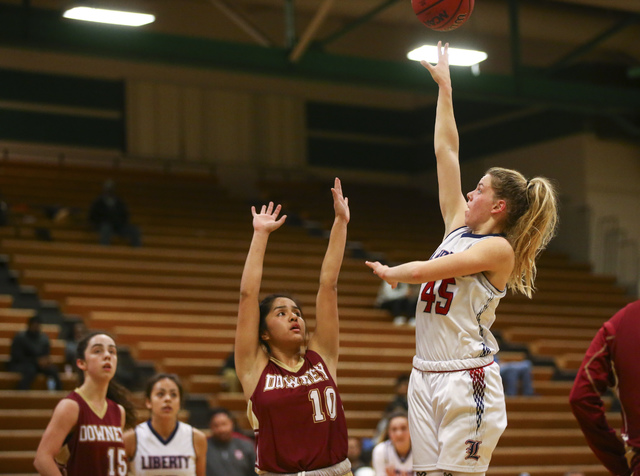 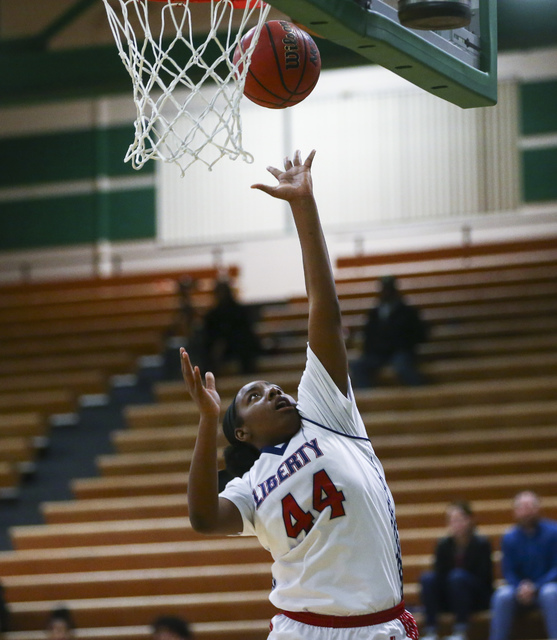 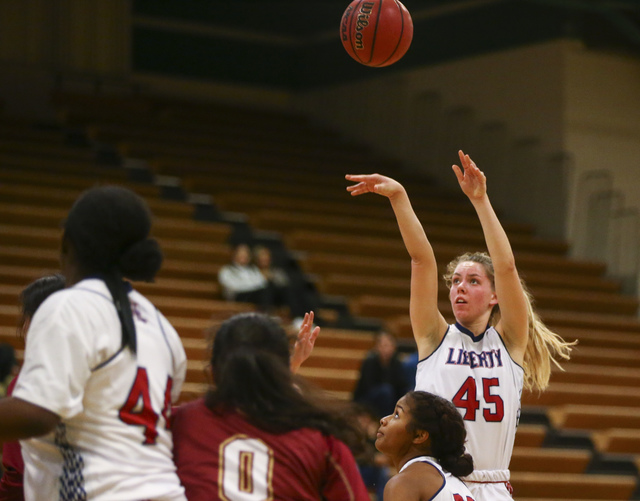 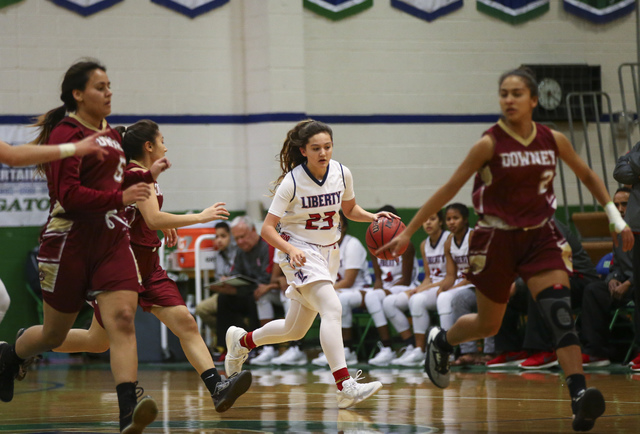 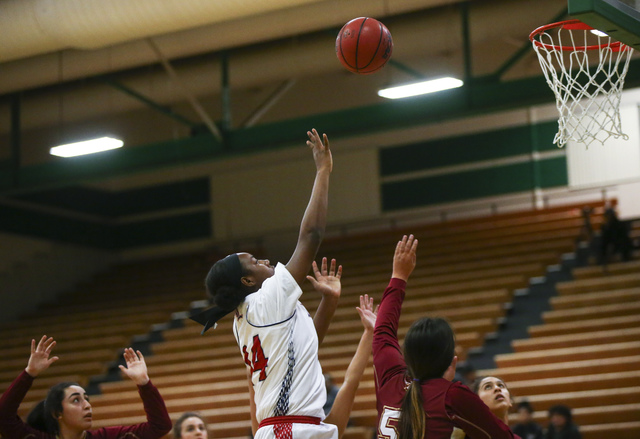 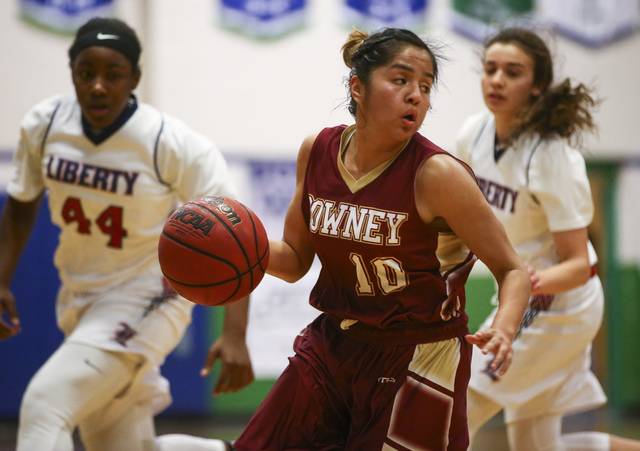 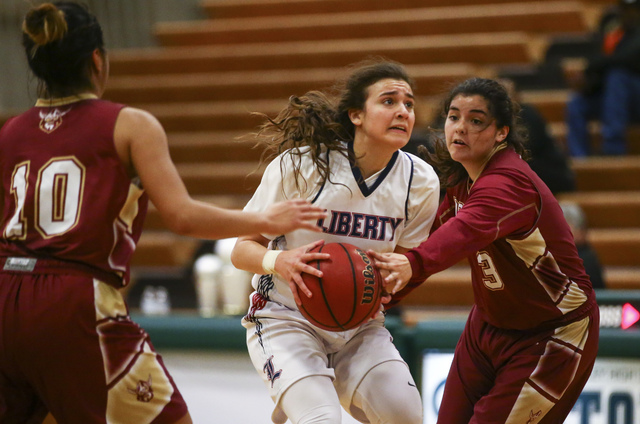 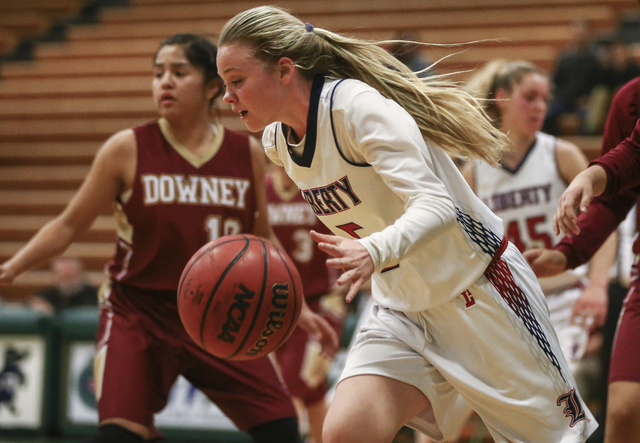 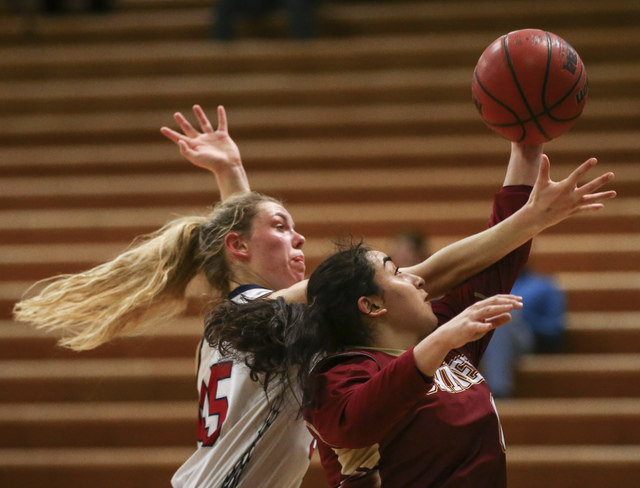 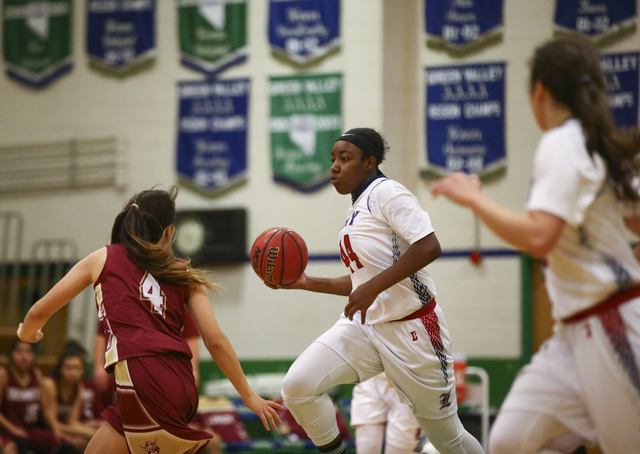 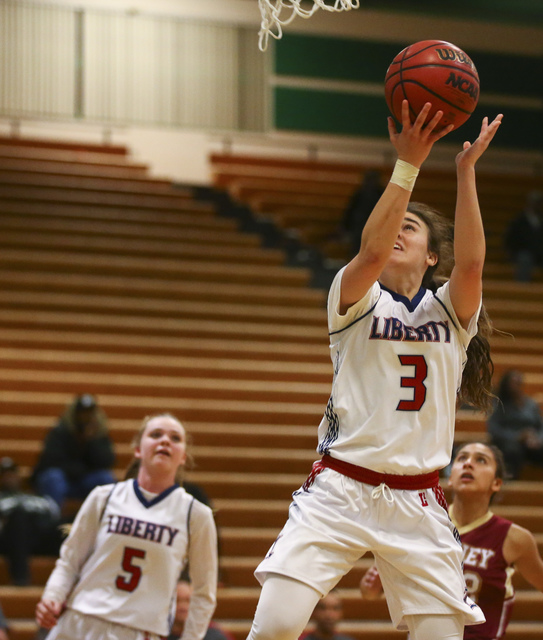 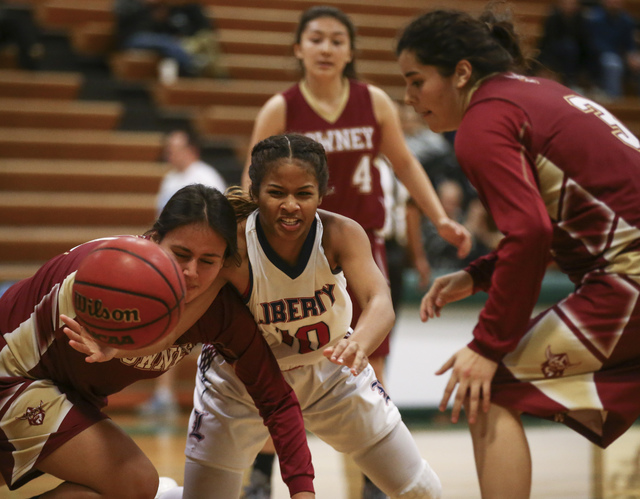 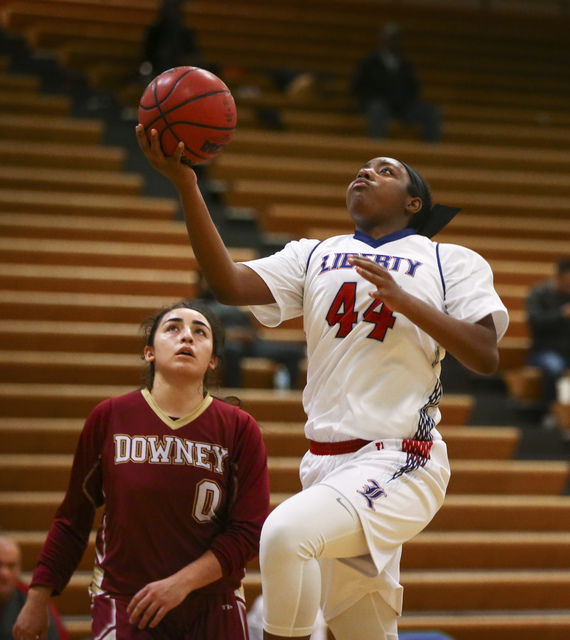 Liberty girls basketball coach Chad Kapanui was clutching the trophy from the Gator Winter Classic on Friday night more than 10 minutes after the final buzzer, still shaking his head in amazement.

Despite an off shooting night by standout post Dre’una Edwards and playing most of the fourth quarter without starting guard London Pavlica, the Patriots fought off Downey (California) to win 60-47 in the Diamond Bracket title game at Green Valley.

Amanda Pemberton dropped in 24 points to lead Liberty (16-1), and Edwards barely missed a triple-double with 15 points on 5-for-15 shooting to go with 18 rebounds and eight assists.

Alexis Tomassi made three 3-pointers and finished with nine points and six rebounds for Liberty, and Pavlica scored eight before fouling out with 6:19 remaining.

“It’s scary that our team pulled off the win not playing our best game,” Kapanui said. “The players are stepping up. Not only Dre can score all the points. I think in this tournament we had four different scoring leaders in the six games.”

Pemberton scored 10 points in the first half to help stake Liberty to a 30-24 halftime lead, and Edwards and Celine Quintino (eight assists) continually found her along the baseline against the Vikings’ 2-3 zone defense.

Pemberton sparked an 8-0 run to open the third quarter that gave the Patriots a 12-point lead, and the margin never dipped below six the rest of the way.

“That’s her shot area and the thing that she’s been working so hard on this summer and going into the season,” Kapanui said. “She’s one of our captains, and it showed. When she needed to step up, she did.”

Surie Camacho had 15 points, and Naelene Garcia added 12 on four 3-pointers for the undersized Vikings, who upended Dimond (Alaska) in the semifinals.

Santa Margarita (Calif.) 35, Green Valley 29 — Brooke Haney had 17 points, but the cold-shooting Gators lost to the Eagles in the Gold Bracket championship game.

Green Valley trailed 20-13 in the third quarter before going on an 8-0 run to take the lead. Haney had a three-point play to start the spurt and capped it with a 3-pointer to put the Gators ahead 21-20 with 2:22 left in the third.

Santa Margarita responded by scoring the next 10 points, including an 8-0 run to open the fourth quarter. Haney’s 3-pointer cut the Gators’ deficit to 31-26 with 1:41 left, and her 3-pointer with 50 seconds to play brought Green Valley as close as 33-29.

The Gators trailed 14-10 at halftime and were held scoreless in the second quarter until Mallory Davis scored inside with three seconds left.

Moapa Valley 47, Lathrop (Calif.) 42 — Kinlee Marshall had 10 of her 14 points in the second half, and the Pirates held on to beat the Spartans in the Silver Bracket championship game.

The Pirates led by as many as 15 points in the third quarter before Lathrop rallied. Moapa Valley led 46-42 late when Madison Bush came up with a steal and made 1 of 2 free throws to clinch the victory.

Lathrop’s Gurveen Bal had all eight of her points in the first half. Mary Cotton, Ryleen Crull, Danya Phillips and Myani Thornton also had eight points for the Spartans.

Las Vegas 38, Durango 24 — Jasmine Perez had 13 points, and the Wildcats topped the Trailblazers in the third-place game of the Silver Bracket.

Armonnie Byrd tallied 12 points for Las Vegas, which won despite a 7-for-23 effort from the free-throw line.

The Wildcats opened the game on a 14-5 run and outscored Durango 15-7 in the fourth quarter to pull away.

Analiyah Matthews led the Trailblazers with a game-high 14 points.

Liberty 63, Lawndale (Calif.) 27 — Edwards had 24 points, and the Patriots pounded the Cardinals to advance to the Diamond Bracket title game.

Quintino and Pemberton each finished with 10 points for Liberty.

The Patriots outscored Lawndale 19-3 in the second quarter and led 46-15 at halftime.

Rejinae Crandell had seven points to lead the Cardinals, who were limited to only four field goals after the first quarter.

Green Valley 46, Orosi (Calif.) 45 — Haney had nine of her 17 points in the fourth quarter, including the winning free throw with 4.2 seconds left, and the Gators scored the final 11 points to shock the Cardinals and reach the Gold Bracket final.

Adriana Gonzales finished with a game-high 28 points for Orosi but was called for a technical foul during a frantic final sequence. Haney missed the first free throw for the technical but made the second to put Green Valley ahead.

Samara Miller added 11 points for the Gators, who scored 22 points in the fourth after totaling 24 through the first three quarters.

Moapa Valley 44, Las Vegas 31 — Marshall had a game-high 15 points, and the Pirates topped the Wildcats in the Silver Bracket semifinals.

Thompson added 11 points, and Cornwall scored 10 for Moapa Valley, which led 22-15 at halftime.

Lathrop (Calif.) 61, Durango 26 — Rianne Lu and Matthews each had seven points in the Trailblazers’ loss to the Spartans in the Silver Bracket semifinals.

Bal made five 3-pointers and finished with 21 points to lead Lathrop.

Phillips had 14 points, and Crull added 11 points for the Spartans.

Mainland (New Zealand) 56, Spring Valley 45 — Kayla Harris had 12 points, and Lynnae Wilds added 10 points in the Grizzlies’ loss to the Eagles in a consolation game.

Spring Valley fell behind 23-10 after the first quarter and couldn’t recover.

Amiee Book led Mainland with 20 points, including 13 in the first quarter.

Tsubasa Nisbet had 13 points, and Lauryn Hippolite added 12 points for Mainland. Nisbet went 5-for-6 from the foul line in the fourth quarter as the Eagles were 17-for-25 from the line overall.

St. Mary’s Academy (Calif.) 60, Rancho 58 — Saipress Jones had 17 points, but the Rams lost to the Belles in overtime in a consolation game.

Alesse Hall had eight points and hit a tying 3-pointer at the end of regulation.

Devoni Hall finished with a game-high 27 points and went 3-for-6 from the foul line in overtime to lead St. Mary’s.

Retha Little had 14 points, and Imani McGregory had 13 points for the Belles.